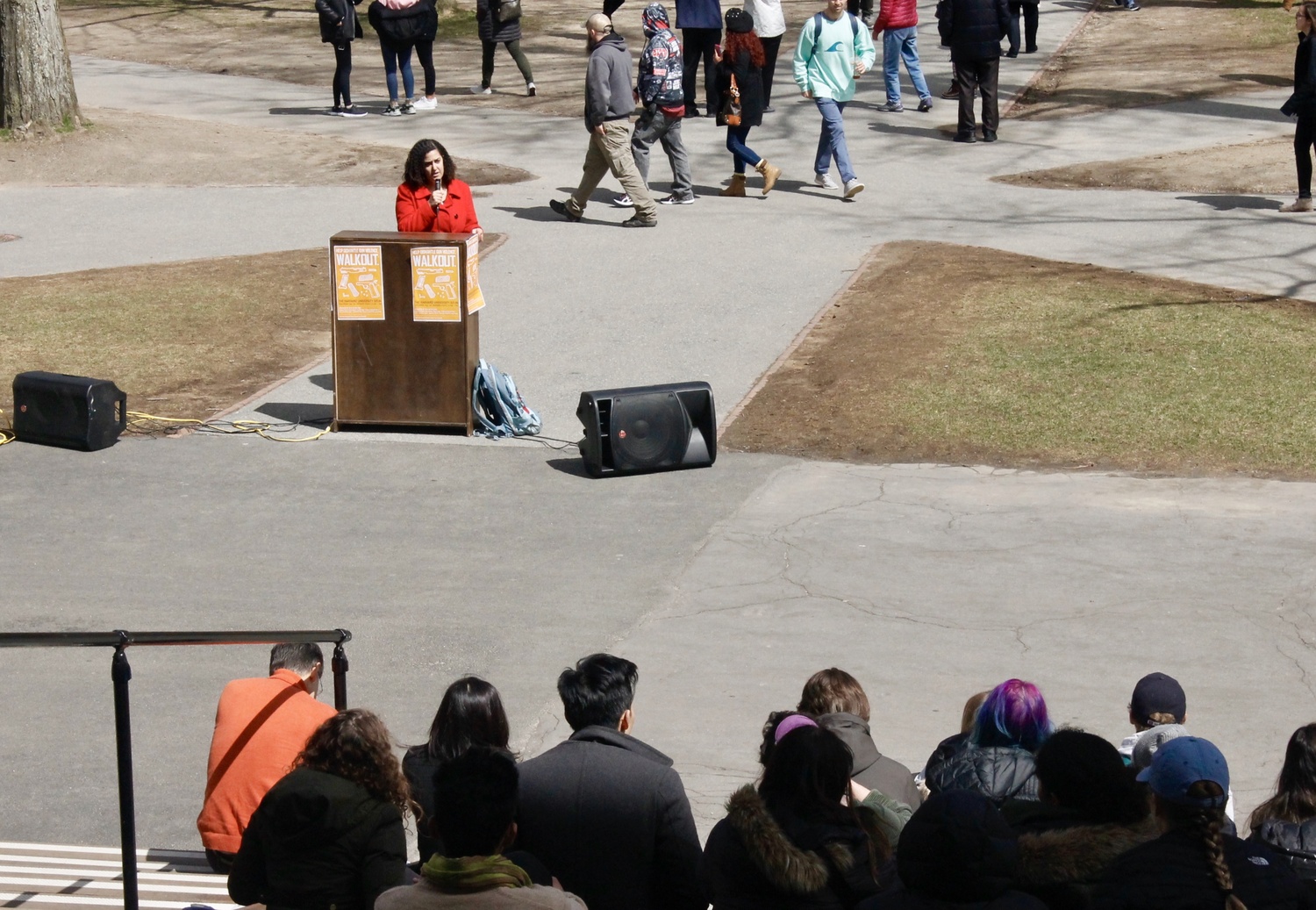 Students gathered on Widener steps Friday morning as part of a national day of school walkouts to mark the 19th anniversary of the Columbine shooting. By Kathryn S. Kuhar
By Simone C. Chu and Delano R. Franklin, Crimson Staff Writers

Roughly 100 College affiliates, visiting high schoolers, and Cambridge residents sat on the steps of Widener Library for three hours Friday as part of a nationwide demonstration against gun violence.

The event began with a 96-second silence meant to represent the 96 gun-related deaths that occur in the United States each day on average.

Dean of Freshmen Thomas A. Dingman ’67 spoke at the event, advocating for gun control legislation. He suggested a series of proposals, including banning semi-automatic firearms, mandating stronger restrictions on firearms purchases and acquisitions, and holding gun manufacturers legally responsible for gun deaths.

“These steps may seem extreme, but the times call for action—real action,” Dingman said. “Our young people, who witnessed Parkland recently, know this fact.”

The event comes two months after a school shooting in Parkland, Fla. that killed 17 and sparked a nationwide movement for gun control.

Te S. Palandjian ’21 and Leonardo A. Garcia ’21 coordinated the event.

“I think the stark lack of numbers also brought attention to steps we need to be taking towards building more of a groundwork for real activism on campus,” Palandjian said.

The organizers said they wanted to continue their push for gun reform.

“There will be more opportunities to push forward. We will be using this energy to be making more impact,” Garcia said. “This goes beyond the sit-in.”

Palandjian said she and Garcia wanted to “set a standard of intersectionality” with the speakers they invited.

“I think this goes beyond gun reform into a protest of a different type,” Palandjian said. “I would urge people who are organizing all sorts of social reform to really press getting the right types of voices, and giving people who don’t always have a platform more of a platform.”

“I think it was important to hear other people’s perspectives and understand the frustration and anger that comes from the brown and black communities,” said Anna L. Duffy ’21, who participated in the sit-in. “Their voices have not been heard in the past, and they’ve been battling with violence for decades—it wasn’t just Columbine or school shootings for them.”