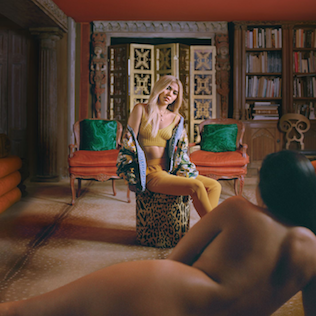 To say that Hayley Kiyoko’s debut studio album “Expectations” is long-anticipated is an understatement. The synth-pop singer, lovingly referred to by fans as “Lesbian Jesus,” rose to pop fame when her self-directed music video for single “Girls Like Girls” went viral in 2015. Now, almost three years later, Kiyoko is back with the perfect combination of relatable lyrics and infectious beats to propel her beautiful and unapologetically queer debut into the pop mainstream.

The opening song “Feelings,” preceded by a captivating electronic overture, offers the perfect introduction to the themes and personality of “Expectations.” Kiyoko, in voice and demeanor, is effortlessly cool. This quality is a welcome juxtaposition to her lyrics. “I can’t help but care,” she sings before diving into the first lines of the chorus, “I over-communicate and feel too much / I just complicate it when I say too much.” Kiyoko is not “too cool to care,” she’s too cool and very much cares, even if she’d sometimes prefer not to. Even in the track “He’ll Never Love You (HNLY),” a biting critique of an ex who left her for a guy, she can’t keep from letting slip how invested she still is, singing, “Sitting there biting your lip / Trying to kiss, who are you trying to trick? / Why don’t you just cut the shit?” Her lingering care for her partners even when they don’t reciprocate, accompanied by the frustration it causes her, is palpable.

The highlight of the album by a long-shot is “What I Need,” a deeply relatable track about Kiyoko’s struggle being with a girl unwilling to be open about their relationship. The duet with R&B singer Kehlani is not only lyrically strong but musically sound, with the quick beat and catchy chorus of a radio hit. Kehlani opens the track with a quick, emotionally conflicted verse that Kiyoko takes over in a stunning pre-chorus: “Sure I would kiss you, I’ll lay with you / You’re broke, no, I can’t fix you.” Other standouts are single “Curious” and “He’ll Never Love You (HNLY), both of which appear to play off the same relationship as “What I Need.” "Curious," is bound to have you dancing and singing the hook “I’m just curious, is it serious?” in the exact same tone as Kiyoko for a week after your first listen.

While “Expectations” is consistent overall, there are moments of tempo and tone experimentation that serve as reminders that the album is still a debut and Kiyoko is not quite finished settling into the niche she created for herself. “Mercy/Gatekeeper” production-wise is a better fit for Halsey’s second studio album “Hopeless Fountain Kingdom” than “Expectations,” but the lyrics are clearly Kiyoko’s and the song, regardless of its slightly disjointed style, is a good one.

It is impossible to properly analyze “Expectations” without acknowledging the significance of its representation. Kiyoko lives up to the nickname “Lesbian Jesus” by giving queer fans a mainstream pop album that authentically portrays their relationships and frustrations, as well as music videos, most of them self-directed, that are visually stunning representations of queer love. It’s a beautiful thing for a generation of women who love women to be able to look up to an artist like Kiyoko who understands how they feel and who puts those feelings into music that they can sing along to. It is this unique–for mainstream pop–representation, as well as its technical quality, for which “Expectations” exceeds expectations.