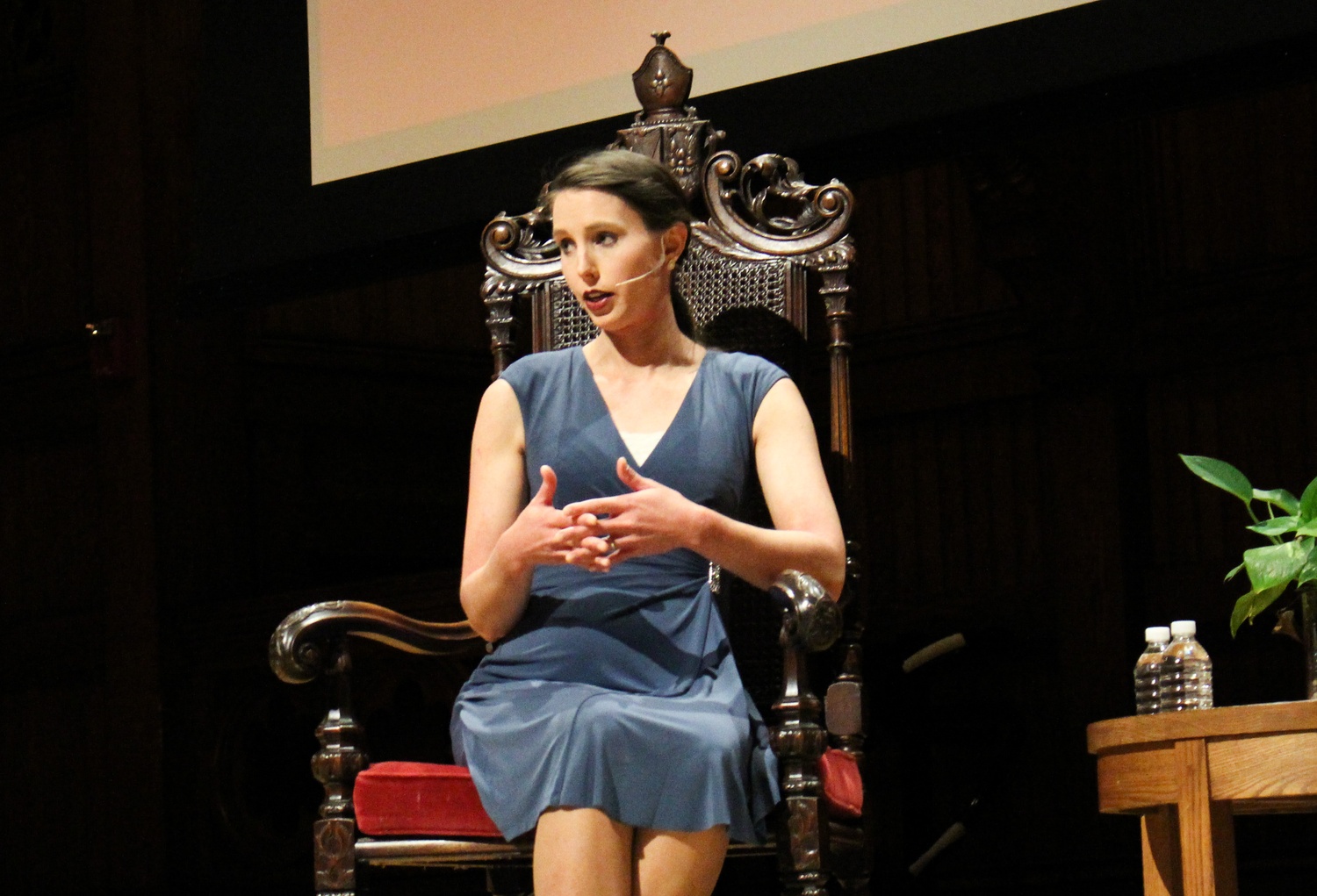 At the Veritas Forum, Rachael Denhollander, a survivor of Larry Nassar's sexual abuse, urges the pursuit of both justice and forgiveness through faith in a Moral Law Giver. By Hayoung Hwang
By Simone C. Chu, Crimson Staff Writer

Rachael Denhollander, the first woman to publicly accuse former USA Gymnastics doctor Larry Nassar of sexual abuse, visited Harvard Thursday to speak about how she seeks to live with both justice and forgiveness in front of a hundreds-strong crowd in Sanders Theatre.

Denhollander earned national attention after she spoke out against Nassar—and inspired scores of women to do the same. Since Denhollander’s denunciations, over 250 women have publicly accused Nassar of sexual abuse. Nassar underwent a seven-day sentencing hearing in late Jan. 2017; across that week alone, more than 150 girls and women stepped up to the microphone in Nassar’s Michigan courtroom to share stories of sexual mistreatment at the hands of the former doctor.

Nassar was ultimately sentenced to up to 175 years in prison for his proven and repeated abuse of young female gymnasts across decades.

At the event Thursday, Denhollander said she operates “within a worldview that is distinctly Christian in nature.” She also outlined her definitions of justice and forgiveness according to the Merriam-Webster dictionary.

She began with the definition of “just,” which she asserted contains five components: “having a basis in or conforming to fact or reason, conforming to a standard of correctness, faithful to an original, acting or being in conformity with what is morally upright or good, and being what is merited or deserved.”

“All of these require and appeal to a standard,” Denhollander said to the Sanders Theatre audience of more than 200.

Denhollander called forgiveness, on the other hand, a “personal internal response.”

Because justice exists as an objective standard, Denhollander said she is not dependent on societal opinion or the ruling of a jury—regardless of Nassar’s final sentencing.

In the end, Denhollander said, her path to healing has stemmed from within.

“Being able to speak the truth, and grieve the way you were damaged in ways that are non-destructive, is really the first step to healing,” she added.

“The purpose of the Veritas Forum is to get people to think,” said Michelle N. Odonkor ’18, who emceed the event. “And so I hope Christians were challenged, and I hope non-Christians were also challenged. I hope that everybody can critically assess what they believe, why they believe it, and have these tough conversations.”

Several attendees said they appreciated the clarity of Denhollander’s thought process, as well as her openness in speaking about her personal experiences.

“Narrowing it down and finding the common thread in all of [the dictionary definitions of “just”] about measuring up to one standard, and how you can’t have justice without having that one standard, really rang true to me,” said Esther J. Um ’21, who attended the event. “It gave me a type of rhetoric to express what I was feeling before.”

In an interview before the event, Denhollander said she is still waiting to see whether movements like #MeToo have had a lasting effect.

“There’s always an ebb and flow to where the spotlight is,” she said. “Right now, there’s still a lot of outrage, but most of it is directed outside of people’s communities. Evangelicals are plenty happy to talk about MSU and Penn State, and the Catholic Church is great when they talk about MSU and Penn State, but they’re not so great when they talk about what happened in their church and Evangelicals are not very good at speaking out against their own community.”

“That really is the test of how much someone cares and how much they’ve changed—what they do if it happens in their own community,” she added.