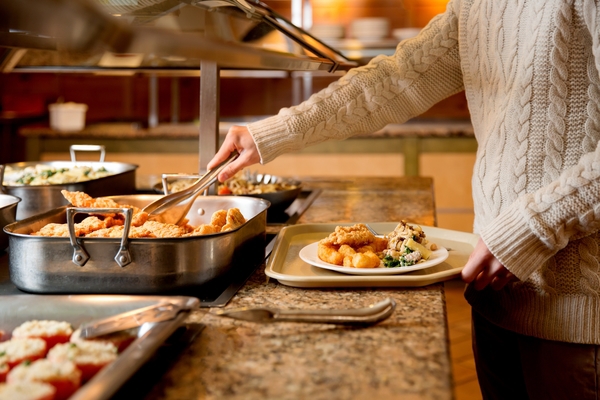 Harvard won a gold medal in the large-school division of the residential dining concepts category. In order to apply for the award, dining services are required to supply the association with their menus, marketing materials, and nutrition facts.

“It’s a pretty comprehensive process,” said Bruce Calvert, director of residential dining operations. “The entry basically outlines every piece of the program that we run.”

Dining services are then judged on the variety of their menus, availability of nutritional information, and operating hours, among other factors.

“Students were concerned about the different cooking oils that we were using, so we switched from canola to using things like olive oil,” she said.

Hayde also pointed to the make-your-own bars available at undergraduate dining halls, which she said HUDS has expanded and diversified this year, as a strong point in Harvard’s entry.

In addition to the gold medal, HUDS earned two silver medals from the association.

The first silver, for retail sales, was awarded for the recently renovated café at the Harvard Kennedy School.

“Every station is enticing,” she said, mentioning the café's pizza, pad thai, and salad offerings. The cafe’s pizza menu rotates through 18 different types of pies, according to the prize application.

“That whole concept, it’s in trend, and people like that,” said General Manager for Harvard Kennedy School Dining Serie Demelo.

The second silver medal was in waste management, awarded as part of the association’s sustainability awards.

Andrew Camuso, senior general manager for Annenberg, the College’s freshman dining hall, said HUDS donates food not taken from the servery to families in need. Freshman entryways can volunteer to package meals for consumption in partnership with Food for Free, a Cambridge-based charity that works to combat food insecurity.

The program delivered 27,000 meals to food insecure families in and around Cambridge in 2017, according to the application. It cost Harvard about $29,000 to administer in total.

HUDS’s application states that these “food waste audits” have kept plate waste to a “nominal average” of 1.5 ounces per meal served.

The National Association of College and University Food Services honors dining services across eight categories. Its president, Patricia Klos of Tufts University, wrote in an emailed statement that its awards inspire excellence in food services.

“The NACUFS awards program provide member schools the opportunity to showcase their most innovative, expressive and successful initiatives in the areas of menus, sustainability and nutrition,” she wrote. “To be recognized by one’s peers is among the highest honors an association can bestow.”