A Woman with a Social Impact: Tracy P. Palandjian ’93

In her late 30s, Tracy P. Palandjian ’93 had an awakening—while working at a management consulting firm, she began to search for something greater than herself.
By Ruth Zheng 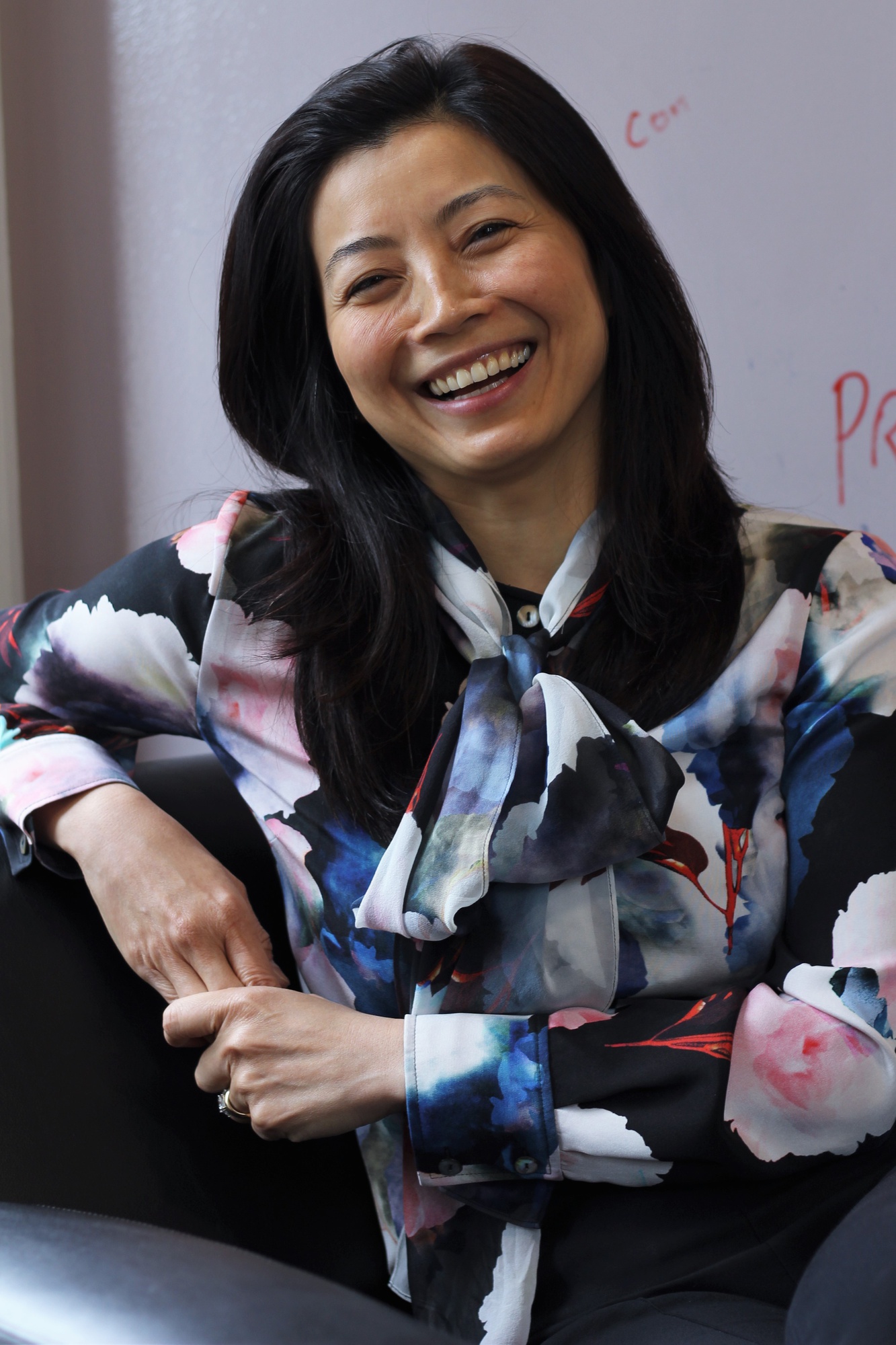 Tracy P. Palandjian '93 is the CEO and Co-Founder of Social Finance, Inc. and a member of the Board of Overseers.

Tracy P. Palandjian ’93 has a vivacious personality that fills up a room, according to her peers—something that you won’t find on the 46-year-old mother of three’s lengthy resume, which includes the C.E.O. of a burgeoning social impact investment firm and Vice Chair of Harvard’s Board of Overseers.

Palandjian left her home country of Hong Kong at the age of 14. In the United States, Palandjian pursued a conventional path to success: She studied economics at Harvard College, earned her Master of Business Administration degree at the Business School as a Baker Scholar, and later worked in management consulting. 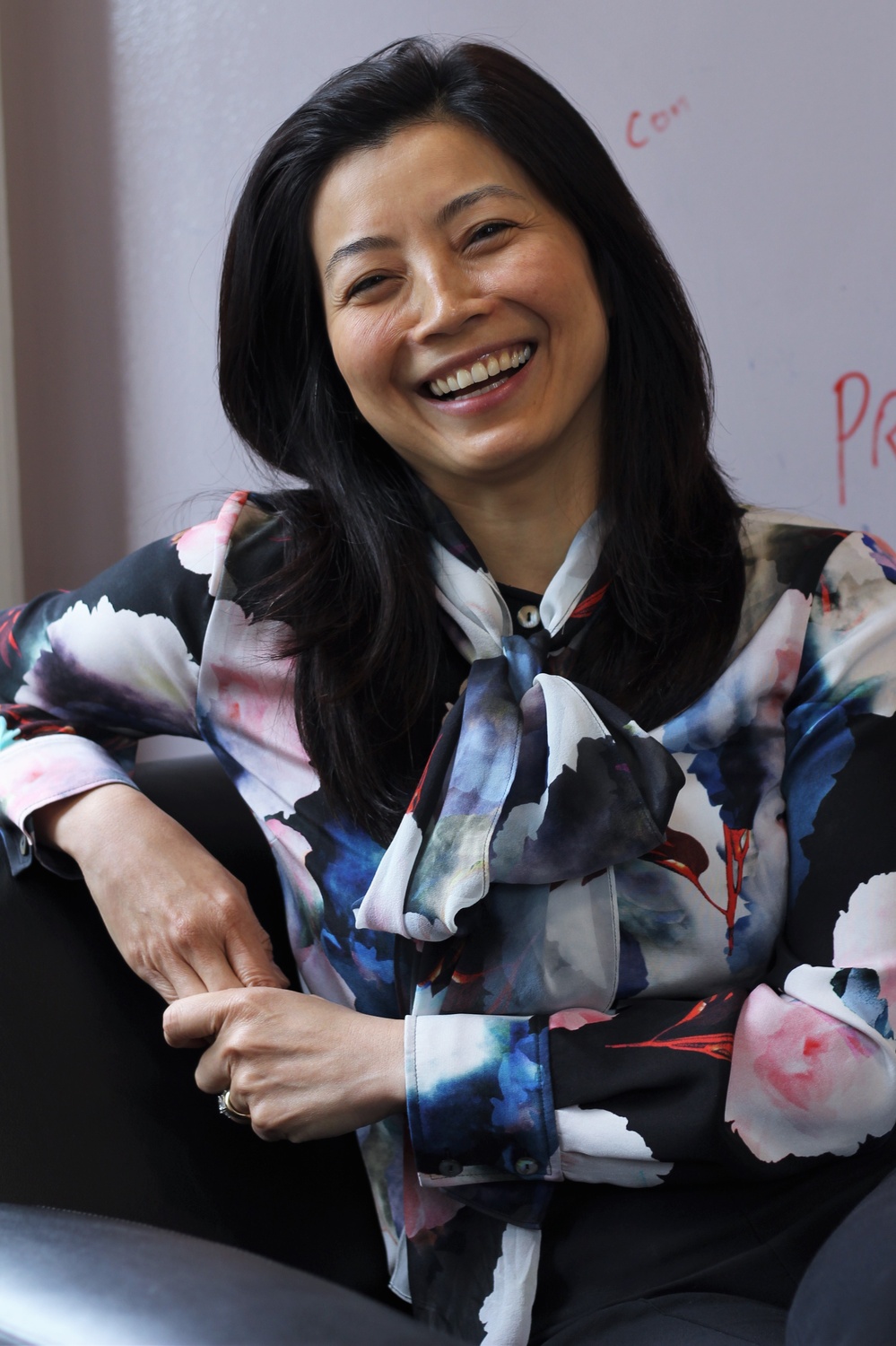 Tracy P. Palandjian '93 is the CEO and Co-Founder of Social Finance, Inc. and a member of the Board of Overseers. By Krystal K. Phu

In her late 30s, however, Palandjian said she had an awakening while she was working at management consulting firm Parthenon Capital Partners and began to search for something greater than herself.

“I started to ask some important questions—what life do I want to lead, what impact am I making on the world?” Palandjian said. “So I took a leap into the unknown and started Social Finance in 2011.”

Social Finance, where Palandjian is now C.E.O., seeks to connect investors with initiatives that the firm predicts will achieve the best social outcomes. Despite wielding its fair share of uncertainty and challenges, the nascent field of social impact investing offers a budding potential to make an impact on people in need.

The leap she took to start the firm turned into one of the most rewarding and challenging decisions Palandjian has ever made, she said.

Though 25 years have passed since her graduation from the College, Harvard continues to play an important role in Palandjian’s life. Co-workers are constantly surprised by her extensive Harvard network.

“The running joke was she must’ve had 56 different roommates while at Harvard because every time someone interesting came up she would say, ‘Oh, they’re a roommate from Harvard,'” said Jeff Shumway, the managing director of Social Finance.

Palandjian is used to taking on enormous responsibility. Her decision early in life to leave Hong Kong to attend Milton Academy, a boarding school in Massachusetts, shocked her parents. She was 14 years old at the time with a limited grasp of English.

“My family is very traditional, so growing up I was told to be practical, to go to a good school and get a good job,” Palandjian said. 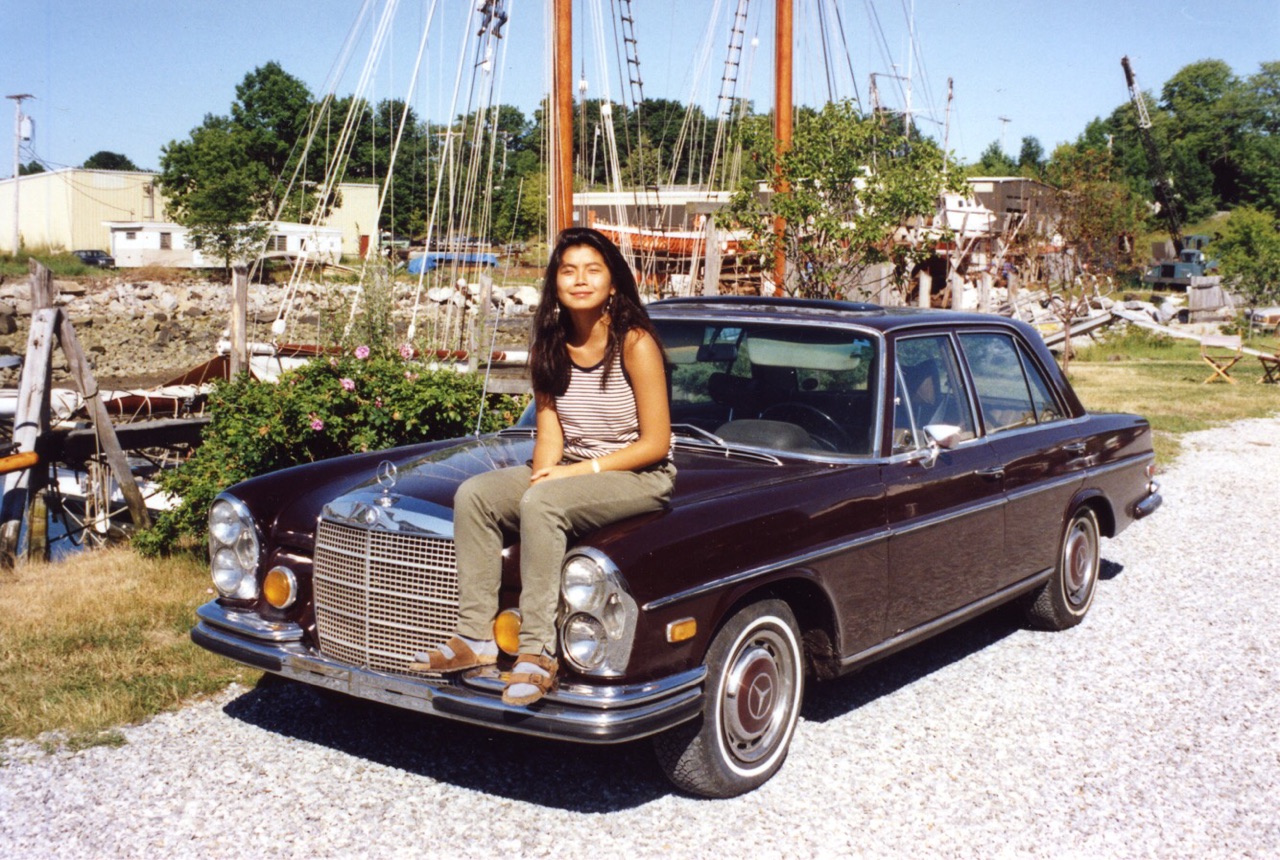 Tracy P. Palandjian '93, who studied economics at Harvard, is pictured here in her freshman year. By Courtesy of Tracy Palandjian

When Palandjian was accepted into Harvard, however, she proved well on her way to following this well-trodden path to success. Her two younger brothers followed her lead across the Pacific Ocean to the same Massachusetts boarding school.

But during her freshman year of college, tragedy demanded Palandjian assume a new role as a caretaker.

“Her dad passed away while she was a freshman in college so she took over family financials and raised her brothers,” said Te S. Palandjian ’21, Tracy Palandjian’s eldest daughter.

At the same time, Palandjian was gaining a reputation at the University.

Economics professor and former Assistant Secretary of the Treasury Karen Dynan, who was a graduate student at Harvard in 1993, said she did not know Palandjian personally at the time, but had heard of the bright undergraduate from those who taught her.

“Even then, she had a reputation as a rising star,” Dynan said.

Dynan said she was unsurprised by Palandjian’s eventual decision to start a firm like Social Finance, despite her proficiency in the traditional world of finance and consulting.

Dynan is now a member of Social Finance’s Board of Directors.

“I knew she was quite good at economics—she struck me as one of these people who was very broad in the sense that I was not surprised that she went on to work in finance,” Dynan said. “But on the other hand, I felt that there was more to Tracy than that.”

AHEAD OF THE CURVE

Some of Palandjian’s colleagues and co-workers describe her as a force of nature. Shumway said he was charmed when he first met his future boss. He said Palandjian has no end of energy, incredible ambition, a high emotional intelligence, and a strong strategic intuition.

“I got really excited about the concept of pay for success,” Shumway said, lauding the budding field that aims to connect government, service providers, and investors to finance promising initiatives for social progress.

He added that he hopes the firm’s work “becomes a spark, this catalyst for people who want to think in a new way within government, investing, nonprofits, and philanthropy.” 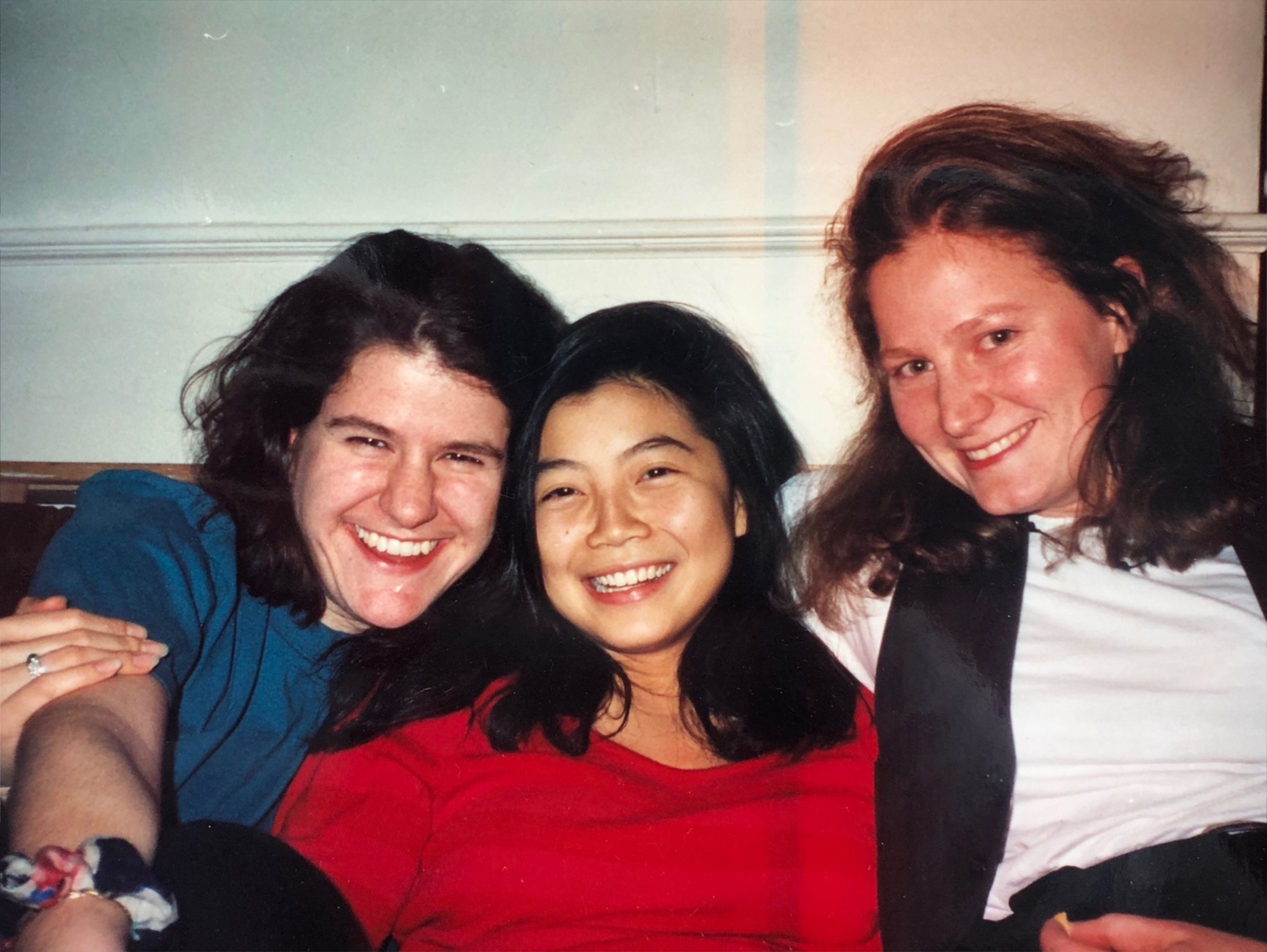 “She brings all of her considerable intellect and energy to the firm and effectively raises the bar for all of us to do the same,” Bal said.

Te said she thinks the reason her mother is able to dedicate so much to her company is because of her passion, which extends beyond the workplace.

“The way she talks about recidivism rates, single mothers, and the types of projects she is working on has informed the type of work my sisters and I are doing in our academic lives,” said Te, who said she spent much of her freshman year of college thinking about racial injustice in education systems.

Though her job is endlessly demanding, Palandjian said she deeply values spending time with her family and that her three daughters “ground [her] as a human being.”

Te said she is grateful that her number one fan at tennis matches, yoga buddy, and competitor in family Pictionary also happens to be her role model.

“I noticed a lot of my peers at Harvard, particularly women, are looking for a strong female mentor at the College to help guide them as to where their career path will be,” Te said. “I’ve felt lucky that my mom has been able to be that person for me.”

A graduate of both the College and Business School and a bona fide Harvard lifer, Palandjian has been serving her alma mater as a member of the Board of Overseers—the University’s second highest governing body—since 2012. Last year, she was elected the Overseers’ vice chair.

After University President Drew G. Faust announced last summer she would be stepping down in June 2018, Palandjian played an especially important role in representing the Overseers in the search for Faust’s successor as one of the three Overseers on the search committee.

“We knew that because she was in the room on the search committee that we were effectively represented,” said John S. Wilson, who was recently named Faust’s chief advisor and strategist on diversity and inclusion initiatives and formerly served as an Overseer alongside Palandjian.

Scott A. Abell ’72, the president of the Overseers, said he met Palandjian even before serving with her on the board because of her heavy involvement with the Harvard Alumni Association. He said Palandjian’s love for Harvard is visible in her thoughtful decision-making and leadership.

“Tracy weighs the issue carefully and considers all perspectives. She makes decisions that will benefit Harvard in the long term,” Abell said.

In her work at Social Finance, Harvard comes up frequently as both a personal and a professional network.

“Being a part of the Harvard community has clearly been a benefit to Tracy and to Social Finance,” Shumway said.

Whether it’s at Social Finance or on the Board of Overseers, Palandjian leads and works with passion.

“My grandfather used to say that if you love what you do, you never have to work a day in your life,” Palandjian said. “I am fortunate to have found that.”

A previous version of this article incorrectly stated Tracy P. Palandjian '93 chose to leave Hong Kong to attend Milton Academy at age 10 and that she spoke no English at the time. In fact, Palandjian chose to attend Milton at age 14 and had a limited grasp of English when she enrolled at the school.

A previous version of this article incorrectly stated that Parthenon Group is a private equity firm. In fact, it is a management consulting firm.