On Cloud Nine: Game of the Year, Runner-Up 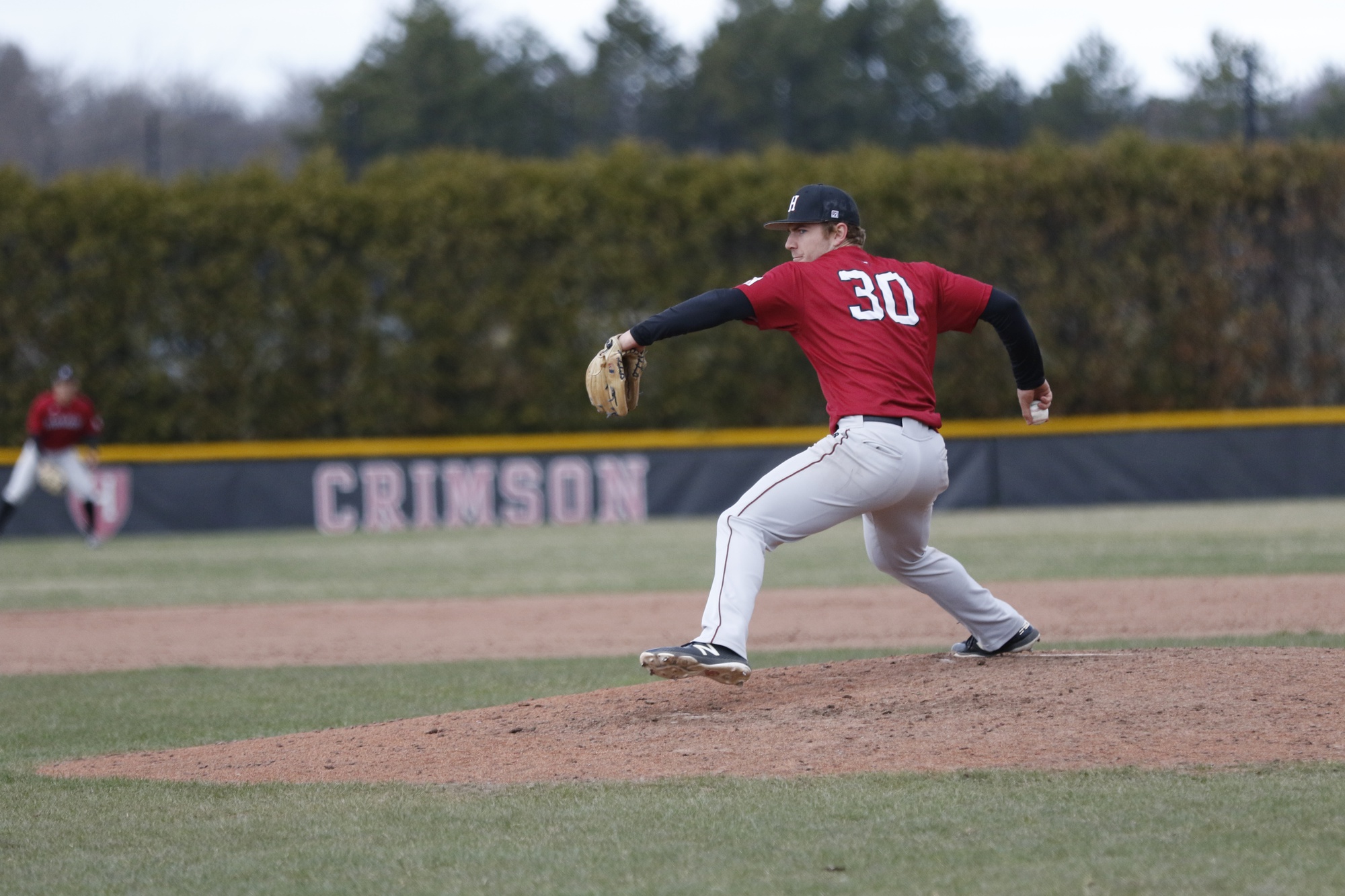 Sophomore Hunter Bigge contributed on the mound and at the plate against Dartmouth, giving up zero runs over four innings and knocking in four RBIs, including a two-run homer.
By Bryan Hu, Crimson Staff Writer

When essentially everyone on the team agrees that a game was one of the wildest, if not the wildest, games they’ve ever been a part of, you can be sure that the game was absolutely bananas.

The Harvard baseball team closed out its 2018 season on May 14 with a win over Dartmouth by a final scoreline of 18-17. The squad delivered five home runs en route to an eight-run comeback, capped by senior second baseman Matt Rothenberg’s second homer of the afternoon, a two-run shot in the eighth.

Rothenberg, having just finished the last game of his career in a Crimson jersey, described the comeback perfectly.

The results certainly were wild.

“The Dartmouth game was definitely one of the crazier games I’ve ever been a part of,” said junior first baseman Pat McColl. “[The hits] just kept coming on that day…. We were getting pretty excited in the dugout, going crazy.”

The two offenses seemingly scored at will on a beautiful Sunday afternoon at O’Donnell Field in Cambridge.

Dartmouth put up three runs in the first, three in the third, a tally in the fourth, four in the fifth, and six in the sixth, scoring 10 unanswered runs at one point to take a 17-9 lead in the top of the sixth inning. 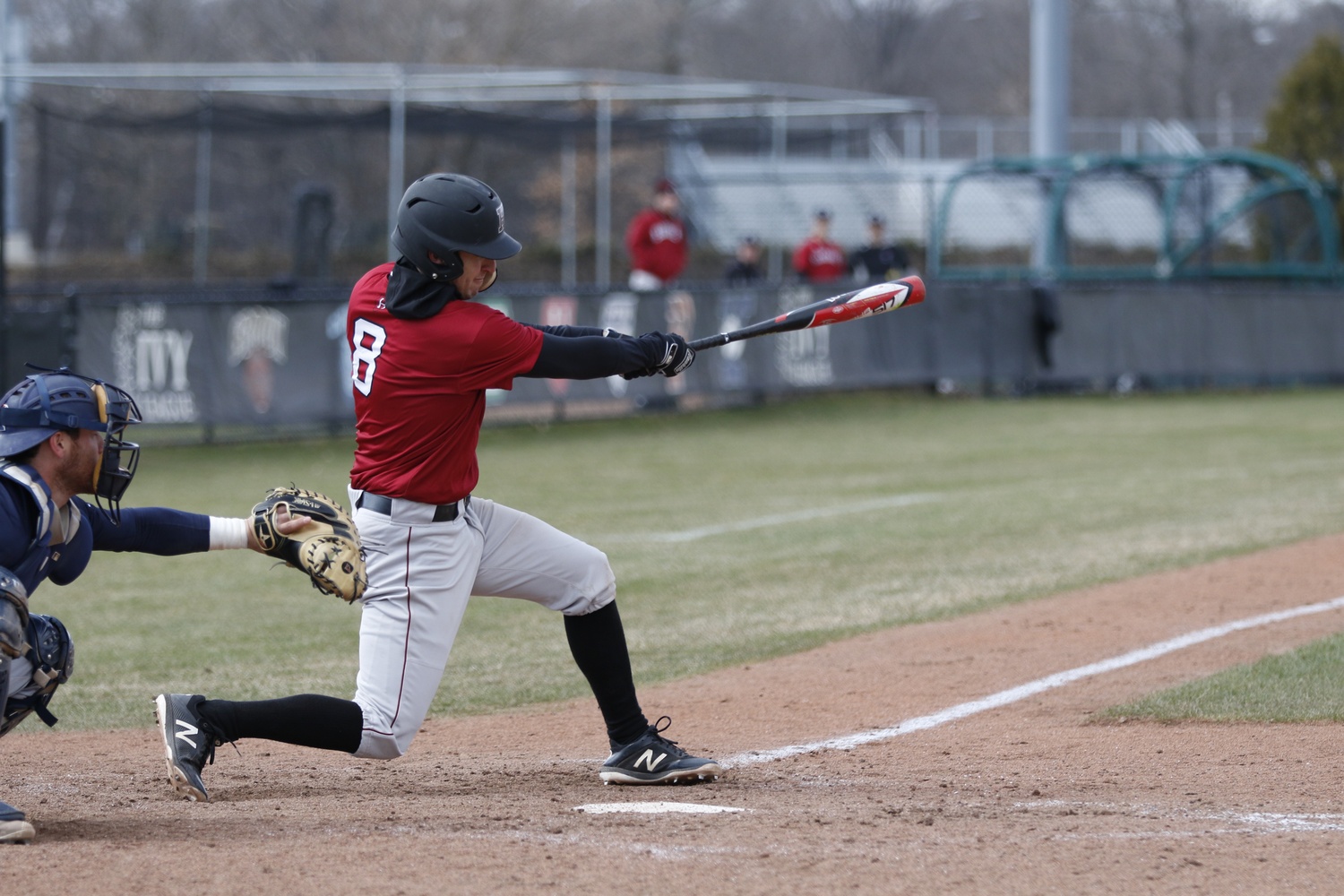 The Crimson's 18-run outing was the highest offensive output of the season that included five home runs, two of which came from senior Matt Rothenberg. By Timothy R. O'Meara

Harvard answered with four in the second, two in the third, three in the fourth, and seven in the bottom of the sixth to bring it back to a 17-16 deficit.

That sequence would’ve been enough for an amazing game in itself. A 17-16 score in a baseball game can only mean that both teams very badly wanted to win on the last day of the regular season.

But with sophomore pitcher/third baseman Hunter Bigge at first with no outs in the bottom half of the eighth, Rothenberg stepped to the plate and bombed his second homer of the day to left field to leapfrog the Crimson into the decisive lead.

“I’d probably put that as our best comeback of the year, definitely,” said junior center fielder Ben Skinner. “It was a wild game. Even though it was an eight-run deficit, just based on how the game had shaped up so far, we still thought we had a chance. It was awesome to come right back in the same inning where they put up six, to put up seven. It was a fun win for us, definitely.”

On a day when scoreless innings were a prized rarity, the defense emerged an unlikely hero for Harvard when it was still trailing, 17-16.

Bigge, who played the hot corner for the first five frames, took the mound for head coach Bill Decker in the sixth and put up a gutsy performance. The sophomore stopped the bleeding in the sixth and then went on to put up three straight goose eggs, freezing Dartmouth at 17 runs.

“My first thought out there was, ‘Oh, these guys are slamming the ball, I need to do a little bit more than I usually do on the mound,’” said Bigge, out of breath but clearly happy after the game. “I tried to tell myself to do what I do best and just focus on my game, and I think that proved to be [important].”

Perhaps it was the shell-shock of losing an eight-run lead, or perhaps it was Bigge’s brilliance, but the Big Green only got one hit and didn’t get a man past second base in the seventh, eighth, and ninth.

“[Hunter’s] performance was awesome,” Skinner said. “He came in with a lot of fire, and Hunter’s one of our best guys, and so when he got on the mound, it gave us a little extra confidence boost.”

Bigge’s value added for the team this year is evident on the stat sheet. The Los Gatos, Calif., native hit .273 in 150 plate appearances, hitting four homers, knocking in 22 runs, and posting a .420 slugging percentage. At the same time, he appeared in 10 games on the mound for the Crimson, pitching 29.2 innings and sporting a 3.03 ERA.

“Hunter is—I mean, that guy’s a baller,” McColl said. “He has an interesting demeanor about him because he’s a pretty loose guy at third base, he likes to joke around, stay loose on that end of it. But once he gets on the mound, he just flips the switch and you know it’s lights out. It’s crazy because both sides were hitting the ball all over the place, but Hunter came in and just shut the door.”

"The Dartmouth game was definitely one of the crazier games I've ever been a part of. [The hits] just kept coming on that day…. We were getting pretty excited in the dugout, going crazy," said junior first baseman Pat McColl.

Bigge, in addition to his contributions on the mound, also had a big day at the plate. He went 3-for-4 with four RBIs, including a two-run dinger in the third inning and a two-RBI double that kept the rally in the sixth going.

But Bigge wasn’t the only hero for the Crimson. The obvious candidate for the game’s most-clutch honors goes to Rothenberg, who hit two home runs and drove in five runs, including the tying and winning runs in the eighth. The senior also drew a walk and scored thrice.

“It was just a real quick at-bat,” said Rothenberg of the winning eighth-inning homer. “It was just first-pitch fastball and I just got the head out and was able to clear it over the fence. It was quick, it was a blur, and it was a blast.”

Rothenberg thus capped an illustrious Harvard career with a great day at the plate, upping his season average to .292 and posting a season OPS of .829.

“Roth had a great career at Harvard and it was really fun to see him go out that way,” Skinner said. “It was Roth’s day, it really was.”

Junior catcher Devan Peterson hit perhaps the second-most important homer of the day—a three-run shot in the sixth that brought the score from 17-13 to 17-16, making the comeback very realistic and keeping the momentum on the Crimson’s side.

Senior captain John Fallon, out all year with knee injuries, made a successful comeback with a hit, subsequently scoring on McColl’s RBI single. The gritty return of the team’s leader spurred the team’s and fans’ hearts all series long.

“He’s gotten healthier,” said Decker, who first put Fallon in as a pinch-hitter in game one of the series, the captain’s first plate appearance in two months. “Today, I was like, ‘If we’re going down, we’re going with our captain.’ And he did a great job, he’s a special kid in my life.”

The game saw 36 total hits, with Dartmouth collecting 19 of them and Harvard notching 17. That the Big Green was also having a field day at the plate was evidenced by the fact that four different Dartmouth players had three-RBI days and five players garnered three or more hits.

The game had significant Ivy League Championship Series ramifications. By virtue of Columbia’s series win at Cornell and the previous day’s split between Harvard and Dartmouth, the Crimson’s crazy win sent Columbia to the ILCS to play Yale. If the Big Green had won, it would’ve beat out the Lions for a spot in the championship series.