Another Title in Hand: Team of the Year 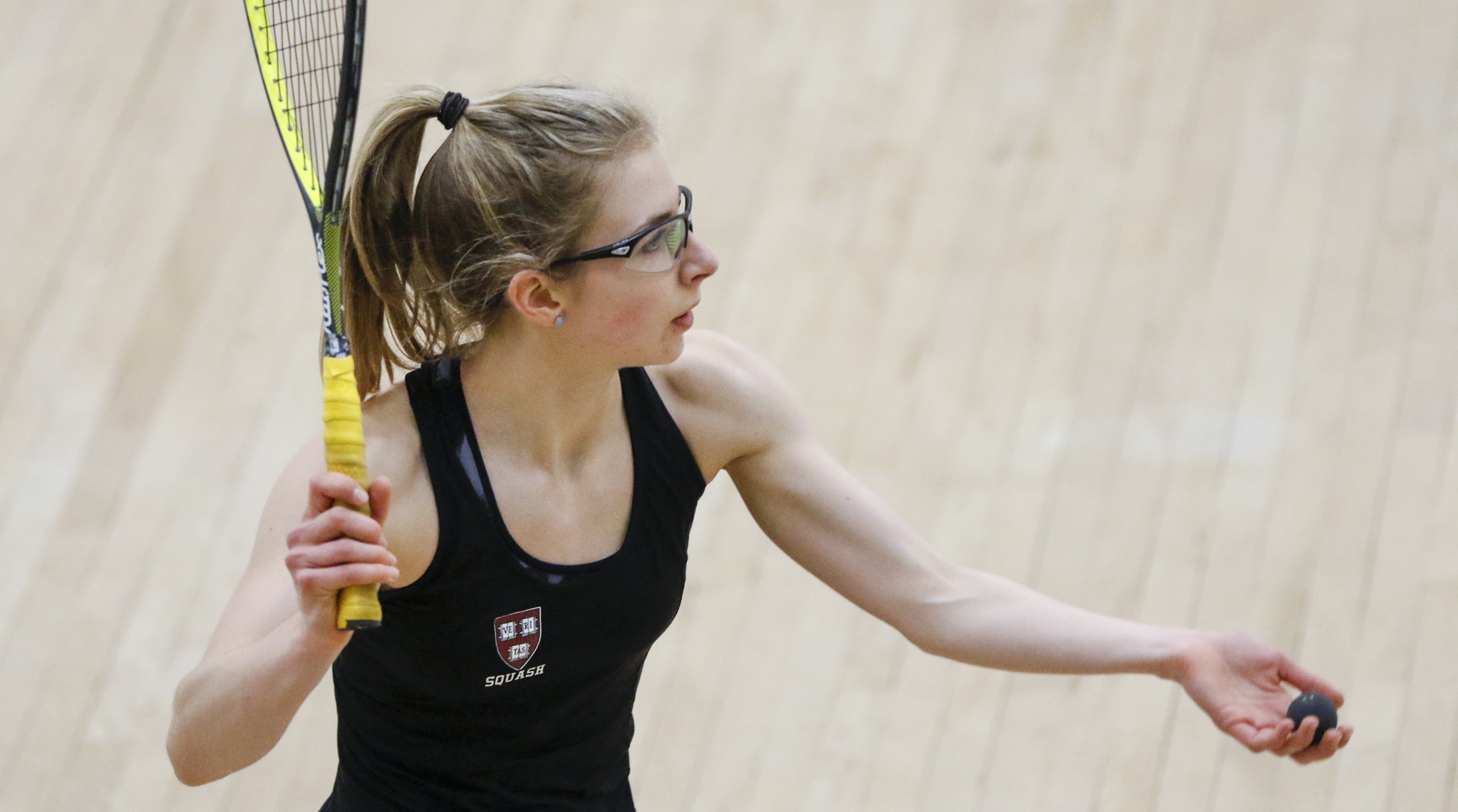 Sophomore Amelia Henley prepares to serve against Trinity in the national championship match. Henley, playing in the No. 5 position, defeated her opponent in four games.
By William Quan, Crimson Staff Writer

The road to success is a popular moniker to which teams of all sports and levels aim to follow. But the Harvard women’s squash team is not on this track. Instead, after winning its fourth consecutive National Championship, the team seems to be in a state of perpetual success.

When spectators entered the Murr Center on a chilly President’s Day Weekend this past February, they stepped into a premier institution for squash. Nearly every single year, the Crimson hosts the collegiate national championships for either men or women. A month after the top collegiate women’s teams competed for the Howe Cup, the U.S. Junior Championships were hosted at the Allston institution. It is the home of the 31-time national champions, Harvard men’s squash.

But among all the preeminence, one matter stood unclear: the identity of the most successful women’s team in collegiate squash. Going into the weekend, both No. 1 Harvard and No. 2 Princeton laid claim to 17 national championships. The Crimson came into the season as overwhelming favorites, losing just four individual matches the entire season and easily dispatching the Tigers earlier in the season with an 8-1 home victory.

Nonetheless, the weekend was scripted for the Crimson to challenge the Tigers in a duel for the throne. Princeton, led by longtime mainstay Gail Ramsay coaching in her 24th year, looked for one more opportunity to defend its long-established position at the top of women’s squash that began by winning 10 of the first 12 Howe Cups. Meanwhile, the Crimson looked to disrupt the status quo by further solidifying its recent upstart status into a long-term dynasty.

After dispatching both No. 8 Cornell in the first round and No. 5 Yale in the national semifinal, Harvard held its end of the narrative with ease. But in the other semifinal, Princeton faltered against No. 3 Trinity and eventually lost the match by a 3-6 score line. Much of the anticipated drama and symbolism faded away with this upset. Instead of a dramatic fight between the top two schools in women’s squash, the national championship came down to a NESCAC school attempting to nick the overwhelming favorite playing on its home court.

In the end, all the dramatic potential had already been siphoned away. The Crimson won in a 9-0 sweep—the first team to accomplish such a feat in the national championship game since the Bantams did so 15 years ago. It was a fitting end to a dominant season for the Crimson, and for the graduating seniors—one final sendoff. The win against Trinity marks the 53rd straight team match won by the Crimson, dating back to Jan. 11, 2015.

This culture of success within the last four years has an interesting implication: as the senior class of the Harvard women’s squash program graduates this week, the players on the team will collectively never be able to remember losing a squash match.

Captaining one of the smallest teams on campus has been one of smallest classes of players possible. Sue Ann Yong and Alyssa Mehta make up the entirety of the 2017-18 graduating class of Crimson women squash players. Playing at the No. 4 and No. 6 positions, respectively, this season, Mehta and Yong have not traditionally been the names to headline the Harvard women’s squash team. They constitute the last class that played alongside now-pro Amanda Sobhy ’15 and spent years lower on the ladder than the younger Sobhy sister Sabrina (named next year’s co-captain along with the younger Mehta sister Sophie) and individual national champion Gina Kennedy.

But despite the lesser name recognition, it is unfair to call them role players in any sense other than in their role to win—the two collectively went 27-1 during this past season. With each of the nine slots equally contributing toward a match victory, they have provided valuable depth that is a major reason for the continuing success of Crimson squash.

When there is a robust talent pipeline the mainstays of a program can be pushed to the backburners in favor of the new products. Mehta and Yong have experienced this in a sense, as both have moved down a position in the lineup since they were freshmen. But as co-captains and veterans they have found ways to contribute in new manners outside of headlining the team.

“Being captain, you are exposed to everything that the team does,” Yong said. “I think the past three years I wasn’t as involved, but just leading the team and the little things that make the whole team come together, I think being captain I have a huge role in making that happen.”

While the duo has found a new, expanded role within the team during this past year, they do so with the larger and collective team goal of maintaining the same excellence every single match, year after year.

Sitting at the top of national rankings naturally puts a target on your back. Underdogs look for upsets and revenge during top teams’ long periods of dominance. With a three-year undefeated streak and hungry opponents every single match, Harvard may have found some relief—or at least amusement—from its status as a technical underdog before its regular-season matchup against then-No. 1 Princeton this past year. As a situation that simply arose from a strength-of-schedule technicality, this occurrence serves to highlight the now-constant assumption that the Crimson is the best team in the nation.

Indeed, what followed was an 8-1 Harvard victory over Princeton in which the biggest surprise was not an upset at the team level, but rather Olivia Fiechter’s first win in dozens of matches against childhood rival Sabrina Sobhy. By the end of the weekend, the Crimson was back on top of the rankings. Since the senior class’ first national championship in 2015, Harvard has done a commendable job at maintaining its position atop collegiate squash as the consistent favorite.

The mission as the top dog is to maintain the gap between yourself and the upstarts hungry for blood. It has the potential to make goals more abstract and the path less clearly defined. Instead of building up throughout the season with the chance to reach glory one weekend with just one upset, the responsibilities of a defending champion are longer-term and even indefinite. Every single workout and training session is dedicated to maintaining a level of play that is championship-caliber. For women’s squash, these pressures have been present for the past three years. The goal is to sustain them as long as possible.

In all three of its title defense years, the team has gone undefeated with a combined team record of 43-0.

Obviously, with its three consecutive title defenses, the Crimson has been taking the pressure that comes with being a heavy favorite week in and week out. There is always uncertainty about the future, but the trajectory of achievement so far should scare the team’s opponents. The results and talent reveal that rather than any sort of deterioration in quality, women’s squash has become more dominant season after season.

In all three of its title defense years, the team has gone undefeated with a combined team record of 43-0, after going 13-1 in 2015 when the team won its first championship of the current run. But instead of absolute record, the scores of the individual matches paint a more lucid narrative of the refinement in class by the Crimson women.

The team’s only loss in 2015 came at Penn in a 4-5 decision when Harvard held a 4-3 lead in the final wave of competition but fell in the last two individual matches.

“Coming into my freshman year, I had no idea about how good of a team I was going to be on,” Yong said. “We had lost earlier in the year…and then being able to come back and win the nationals and do it for the seniors was sweet.”

There has been no such break in concentration since then. Instead, the scores have widened as the team has run farther away from the pack. In 2016, women’s squash glided relatively unscathed through the regular season and then edged Trinity and Penn in the national semifinal and final matches, respectively, by 5-4 margins. The Quakers proved to be the toughest challenge once again in the team’s second title defense season, but the Ancient Eight rivals’ regular season game and national championship matchup were both taken by the Crimson with a relatively easy 7-2 score line. This past season saw a frightening display of dominance, as the team had four 8-1 decisions during regular season play but managed to sweep all three games of the national championship.

“After [the first title in 2015], it was about maintaining that level and that standard, which sometimes is harder to do than winning in the first place,” Yong said. “So I think this year we had a really enthusiastic group of freshman and I think they stepped up really well…. We know there is a lot of pressure on us and every team is trying to bring us down, but I think we did really well with that pressure. We were still able to deliver, which was really good for us.”

As the team only graduates only two seniors, the continuity appears primed to continue the success of the past four seasons. The team is again adding top-level reinforcements with Egyptian recruits that will challenge for the top slots in the lineup. In contrast to competitive play, the recruiting game may now become easier because of Harvard’s sustained success and unchallenged status as the top women’s collegiate team.

While reflecting into the past and inferring about the future may be helpful to put the team’s success in perspective, the present is the origin and the reason for success.

Nothing says more about the present of the Harvard squash program than hard work. There are intense physical training regimens, especially during winter break when there are no competitions. Once matches start, the players taper off on their physical training, but the mental training regimen of visualization and putting squash in perspective powers forward and helps throughout the season. This training helped in the long term, as shown by the team’s consistent, dominant play going through the national championship game.

Even with a small graduating group, the Crimson did not escape from its successful ways.

“Sue Ann and I were a very small class—there were only two of us, whereas there are usually three or four,” Mehta said. “So, I would like to think, personally, I was always a very big fan of putting in the really hard work, but I also think everyone else was extremely good at that. So, I like that culture that has been left behind.”

In the end, despite winning four national championships, currently boasting a teammate who is a two-time national individual championship finalist, and combining in a successful captainship, the pair must move on.

“I think I am going to really miss the team aspect of it because I think that is what made the whole thing so much better,” Yong said.

With the leadership of the duo, women’s squash has blossomed into the most successful sport at Harvard in recent history. The team is turning into a dynasty with which to be reckoned. Yong and Mehta are two of its empire-builders.