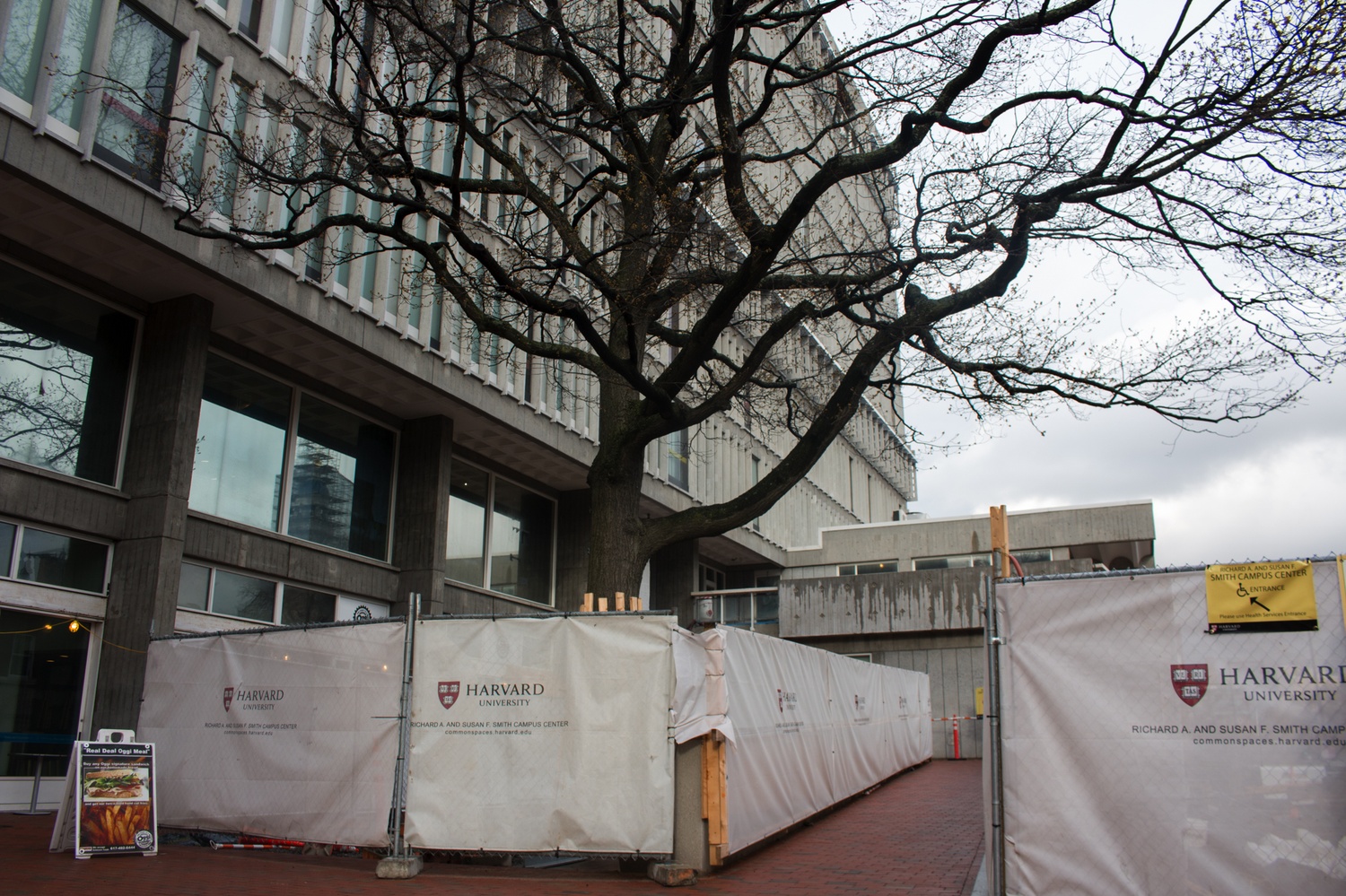 Harvard planted new trees in front of the Smith Campus Center, which is under construction and slated to open in Fall 2018. By Caleb D. Schwartz
By Karina G. Gonzalez-Espinoza and Paul D. Tamburro, Crimson Staff Writers

Harvard recently planted five trees outside of the Smith Campus Center—replacing four trees that were removed in 2016—as part of the ongoing renovation of the center, slated to open in Fall 2018.

When the trees were cut down in 2016 to make way for construction, many Cantabrigians said they were upset to see them go.

Elena Saporta, a landscape architect on the board of the Harvard Square Neighborhood Association, said she was glad to see the trees replanted, recalling how upset she was when they were originally removed.

“I was totally shocked. I remember going by the site and seeing sort of day-glow red and orange spray paint where the trunks had been, and that was just a very poignant reminder of what had happened,” Saporta said.

Charles M. Sullivan, executive director of the Cambridge Historical Commission, said changes to the plaza were, including the tree removal, were controversial.

“The community was quite upset when the proposal was made to make the plaza smaller and also to remove the trees,” he said. “Trees have a sort of a built-in constituency in Cambridge, and these were familiar to a lot of people.”

The newly planted trees outside the Smith Campus Center are skyline honey locusts, London planes, and yellowwood, species chosen because they are well-suited for New England’s climate and have long lifespans, according to Harvard’s Director of Common Spaces Julie Crites.

Crites wrote in an emailed statement that the trees are part of a larger plan to revitalize the space.

“The new trees, along with the plazas, new chess tables, seating, and common spaces, are part of the University’s effort to create an outdoor space that’s welcoming and inviting,” she wrote.

Crites added that the new trees will be carefully maintained to maximize their lifespans.

“The new plantings also include the introduction of structural soils and state-of-the-art irrigation and aeration systems, which will greatly enhance the long-term viability of the newly installed trees,” Crites wrote.

Throughout the process of removal and replanting, planners used focus groups and surveys to learn about public perceptions of the project, and worked with the Cambridge city government, Cambridge Historical Commission, and Harvard Square Neighborhood Association to negotiate details of the project.

“The trees were only a small part of the whole review, which involved construction of the student activities center on Holyoke Street and the construction of the glass box that’s being completed now that extended into the Forbes Plaza space, and the restoration of the exterior of the entire building,” Sullivan said.

Denise A. Jillson, executive director of the Harvard Square Business Association, wrote in an email she was “delighted” to see the trees return.

“Clearly, these new trees will provide shade, color and beauty,” Jillson wrote. “Our expectations have been exceeded and we look forward to warm afternoons under their shade and crisp fall days enjoying their color.”

“I am really impressed at how big they are,” Devereux said. “They had said they would replace them, but typically when mature trees are removed for development and new trees are replanted, the new ones aren’t as big. They made an unusually big effort.”

Despite the replanting, Sullivan said it is too soon to tell whether the new trees will live up to their predecessors.

“In general, replacement trees are never going to be as satisfying as the ones they replaced, because they’re necessarily small and not mature,” Sullivan said, although he added he had not yet seen the new trees. “Certainly at this time of year they haven’t fully leafed out, so it’s kind of premature to make a judgement.”

The new additions are just five of 45 total trees that Harvard plans to plant around the Campus Center, which remains on track to open this fall.