O’Donnell Steps Down from Harvard Corporation

After seven years serving as a member of the Harvard Corporation, Joseph J. O’Donnell ’67 stepped down from his position last week.
By Truelian Lee 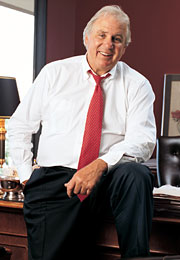 After seven years serving as a member of the Harvard Corporation, Joseph J. O’Donnell ’67 stepped down from his position last week.

O’Donnell’s time on the Corporation—the University’s highest governing body—was marked by his work developing the new Allston campus and role as a leading fundraiser for Harvard’s record-breaking capital campaign. The campaign, which has raised more than $9.1 billion, concluded last week.

Before serving on the Corporation, O’Donnell was a member of the Allston Work Team and the Harvard College Fund Executive Committee, as well as an elected director of the Harvard Alumni Association.

At the College, he was a varsity athlete in football and baseball, acting as the captain of the baseball team senior year. After graduating, he worked at the University as the Associate Dean of Students at the Business School.

O’Donnell has also long been a prominent donor. In 2012, he and his wife Katherine A. O’Donnell donated $30 million to the University, and in 1995, he gave $2.5 million to create an endowed chair for Harvard’s baseball coach

Former University president Drew G. Faust wrote in an emailed statement that O’Donnell is a “devoted” and “inspiring” alum.

“He’s always there when you need him, and he’s one of a kind,” Faust wrote. “Joe has been a terrific member of the Corporation, and I have no doubt he’ll remain an energizing force in the life of the University for years to come. We can’t thank him enough.”

University president Lawrence S. Bacow, who took office Sunday, wrote in an emailed statement that O’Donnell’s work on the development of Harvard’s Allston campus was “invaluable.”

“Joe has been a wonderfully thoughtful, dedicated, and generous alum,” Bacow wrote. “And while he may be stepping down from the Corporation, I intend to keep him on speed dial during my time as president.”

Scott A. Abell ’72, former President of the Harvard Board of Overseers, wrote in an email that O’Donnell is “smart,” “tough,” and “loyal.” Abell referred to O’Donnell “one of Harvard’s great treasures.”

“Joe is very well connected, and highly respected, at the local, state and federal level,” Abell wrote. “He constantly seeks ways for Harvard, Cambridge, Boston and the region to work together for everyone’s benefit.”

“Joe O’Donnell is irreplaceable,” Abell wrote. “Harvard University could have no greater friend.”