‘Passengers’: The Future of the Circus 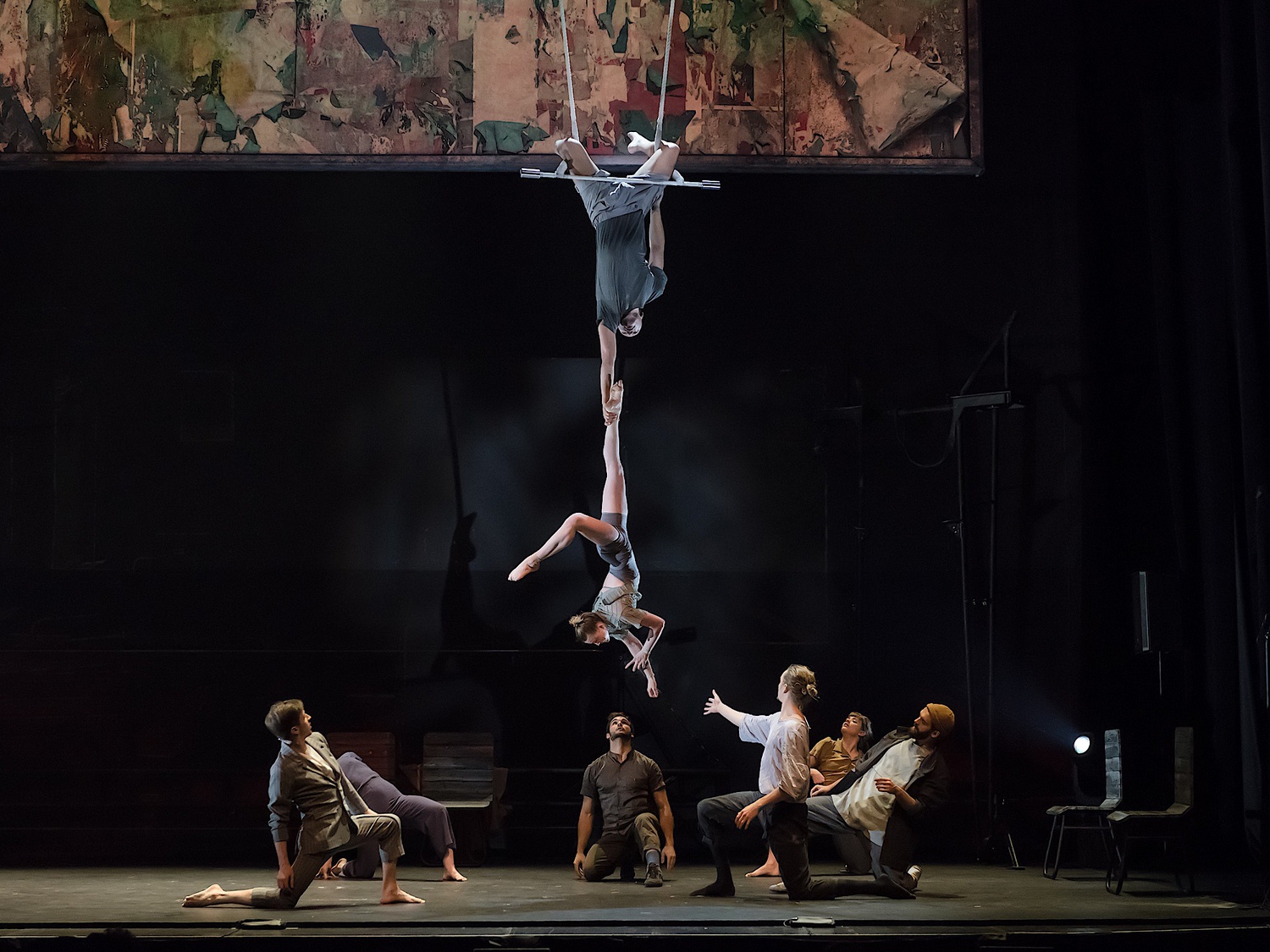 What if circus was more than just a spectacle? That’s the question that “Passengers,” at the Emerson Cutler Majestic Theater from Sept. 25 to Oct. 13, seeks to answer. Directed by Shana Carrol and sponsored by Arts Emerson, “Passengers” combines modern dance, acrobatics, and aerial dance to weave an abstract masterpiece about the benefits and woes of travel by train.

Despite its lack of linear plot, “Passengers” still weaves a cohesive narrative with its anthology-type storytelling. Every scene is completely different from the last, but it manages to pull off this variety with grace and wonder. Circus shows often fall prey to a childlike need for constant validation, following each stunt with an awkward break for applause; however, “Passengers” manages to imbue acrobatics with maturity and continuity. The show never takes a breath from beginning to end. There are always things to focus on, even during complicated set transitions.

Beyond the heartstopping acrobatics, the staging of the production is phenomenal. The lighting is exceptional; panning the audience with tight, beamed spotlights to simulate a train passing, and using hand-held lamps to direct audience focus and project artists’ shadows. Lighting designer Éric Champoux also makes frequent use of projected sets. Alongside ambient train noise, holographic backdrops create a truly immersive experience. Perhaps most impressive is a video of a telephone projected over a traditional Chinese pole (a rotating, 10-30 foot pole the acrobats climb).

“Passengers” also uses an incredible score to facilitate changes between each scene. Music Director Colin Gagné had a genius use of natural percussive noises in one of their numbers, bringing together ordinary sounds — a sneeze, a yawn, a pen tapping, or a woman saying “excuse me” — to create a “song” that brings the show’s juggling piece to life. The fun jazz music gives context to the Fosse-inspired jazz and hula hoop choreography. The entire show plays into the old American wonder at the railroad; acrobats flipping and rolling across the stage like tumbleweed further heighten into that nostalgia.

The entire production is incredible, but a few performances stand out. Every show should begin and end with a bang, and “Passengers” certainly does. The opening group piece showcases dance, hand-to-hand balancing, and human swings. “Passengers” uses circus art as not just a spectacle, but a tool for immersive storytelling. Of the individual apparatus performances, two pieces were particularly breathtaking. First, the duo trapeze act was astounding. Not only were the acrobats doing expected flips and hand-to-hand work, but the duo also managed to get an audible gasp from the audience when they dropped the female acrobat unexpectedly from the trapeze hovering 10 feet in the air, into the waiting arms of her cast mates. The unexpectedness of these dramatic stunts makes the show truly feel like magic.

A second show-stopping moment is the notoriously difficult Russian Cradle, near the end of “Passengers.” In a Russian Cradle stunt, one acrobat is a base connected to a platform. Meanwhile, the other swings underneath the platform and then launches into the air before being caught again by their partner. It’s an apparatus that takes a tremendous amount of strength, coordination, and experience. The Russian Cradle performance in “Passengers” closed the show — and for good reason. It began with the flyer unexpectedly diving head first off of the platform, only to be caught by his ankles. With trick after trick, the performers showcased an athletic energy and raw fearlessness that was matched only by the intensity of the music behind them.

In “Passengers,” every element of production came together to create a show that, while smaller in scope than Cirque du Soleil, creates wonder of the same magnitude. The beauty and ingenuity of this show make it a must-see for all audiences.