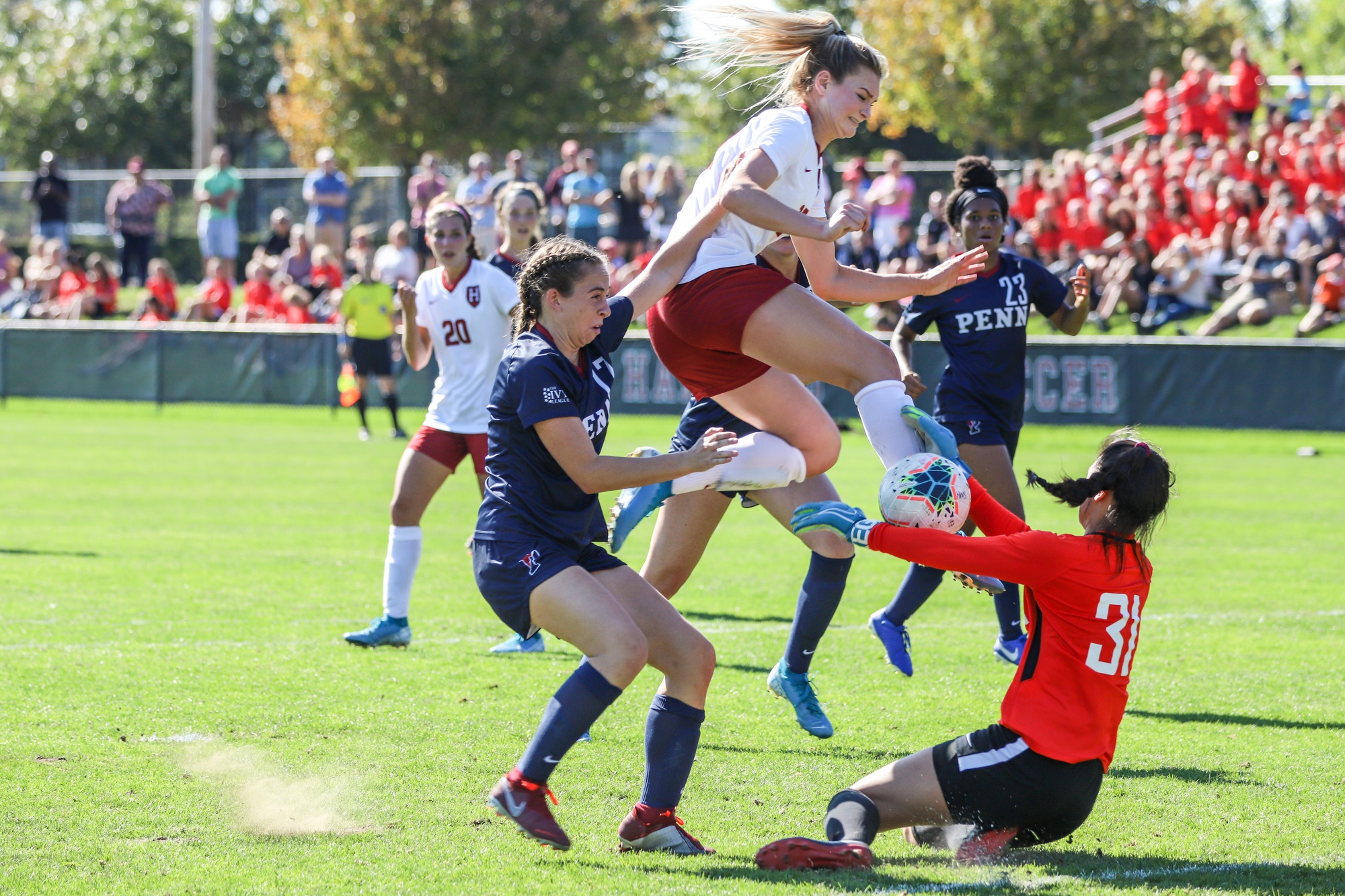 Offense has buoyed Harvard's 2019 campaign as the Crimson has amassed 223 shots over the course of the season and averaged 2.29 goals per game.
By Ben Morris, Crimson Staff Writer

After a consequential loss to Brown (12-1-1, 5-0 Ivy League) one week ago that put the Bears alone atop the Ivy League, the Crimson came out strong against Princeton (5-6-3, 1-3-1 Ivy League) on Saturday, looking to reclaim the momentum that the team had built up before having its seven-game win streak snapped. The game proved to be a difficult test for Harvard, as the match was very tightly contested throughout, but with its back to the wall and the fate of its season potentially at stake, the Crimson stepped up and reasserted itself with a 2-1 victory against none other than the back-to-back Ivy League champions.

The match got off to an unbelievably quick start, as Harvard was able to strike first after only two and a half minutes. The sequence began when sophomore forward Jordan Di Verniero collected the ball on the right wing of the pitch. Di Verniero then went to work, darting down the sideline and taking on the Tiger defense. As two defenders converged on her, Di Verniero demonstrated great foot skills with a fantastic move that allowed her to blow past both. Right as she was about to reach the end line, Di Verniero sent in a great cross from the right corner that connected with the foot of junior forward Murphy Agnew. The clean volley resulted in a hard strike that sent the ball whizzing into the upper left area of the goal before the Princeton goalkeeper could even react to the play. With that, Harvard found itself in an ideal position early on and looked to build on it.

However, despite the rapid start, the remainder of the first half featured back-and-forth play, as each team battled hard without giving up an inch, knowing that the game was far from over. Although the Crimson only got off one more shot in the first half, the defense, anchored by senior goalkeeper Kat Hess, were able to deter any sort of push by the Tigers, and the half concluded with Harvard still clinging to its 1-0 lead.

After coming back out onto the pitch, both teams displayed a newfound fire, with several players rattling off shots that helped to continuously build up tension on the field, as well as among fans in the stands. Something was going to have to give.

The moment came in the 57th minute when junior midfielder Olivia Kane of Princeton converted on a cross to net the tying goal.

It was here that the Crimson faced its most daunting challenge—a loss here would set the team even farther behind Brown. The final 30 minutes would not only decide the game but possibly the season as well. With the Tigers regaining the momentum and Harvard facing a crossroads, the Crimson teammates would have to turn to each other and reinforce the familial identity that they have cultivated throughout this season.

“We are a tight-knit group who share a passion for soccer and competition,” Hess said. “We respect one another and we play as a unit, not as individuals. And during the game, after Princeton tied the score at 1-1, we held those values true, working together, and focusing on our game and what we needed to do rather than on an unfortunate goal against in the second half. We lifted each other up, fought to the end, and left it all out on the field.”

While the goal for the Tigers seemed to threaten the outcome of the game, Harvard remained calm and composed. Each player, knowing that they were going to have to battle together, returned to mid-pitch for the kickoff, looking to do nothing other than stick to its original gameplan: play as a team and win.

And that is exactly what they did.

Two minutes later, after another save by Hess, the Crimson came right back. First-year forward Angela Caloia played a ball back to junior midfielder Maria DiMartinis, who, from Harvard’s end of the field, sent an exceptional through-ball up ahead to a streaking Agnew. Agnew, with a Princeton defender right on her heels, took one touch into the box and fired a shot that narrowly snuck by the Tiger goalkeeper, giving the Crimson the lead once again.

Back on top, Harvard now looked to lock down and hold on for just a short time longer. With Princeton mounting attack after attack, the Crimson defense shut them all down, building more momentum with each clearance. In the 81st minute, with the finish line in sight, Agnew broke out past three Tiger defenders and launched what would have been not only her hat-trick goal, but likely a game-ender. However, the ball was deflected by the Princeton goalkeeper and rolled out of bounds just an inch to the right of the goalpost.

Yet, Harvard remained strong on defense, pushing aside any final attacks. Finally, the thriller of a game came to an end, with the Crimson picking up right where it left off before its game against Brown.

The win could not have come at a more pivotal point in the season. With the pain of the Brown loss in Harvard’s recent memory, the squad had to refocus its preparation and mindset.

“Soccer is a beautiful game,” Hess said. “You win some and you lose some, and unfortunately, we suffered a tough loss against Brown last weekend. But that is what is so great about these girls and this team. We know that in order to be successful, we will fail, because that's how we learn and grow to be better than we were the day before.”

With only two games remaining on the regular-season docket, the Crimson will return to the pitch next Saturday to take on Dartmouth (9-5-1, 0-4-1 Ivy League) at Jordan Field. The match will take on added importance for Harvard because, with the win against the Tigers, the Crimson has managed to restabilize its championship hopes.

“As the saying goes, 'life’s a climb, but the view is great,’” Hess said. “Championships are never handed to you, you have to fight for them every time you put on that jersey and step on that field. We knew that that loss [to Brown] wouldn't cripple us, but instead, drove us to prepare better and work harder for our next match against Princeton.”