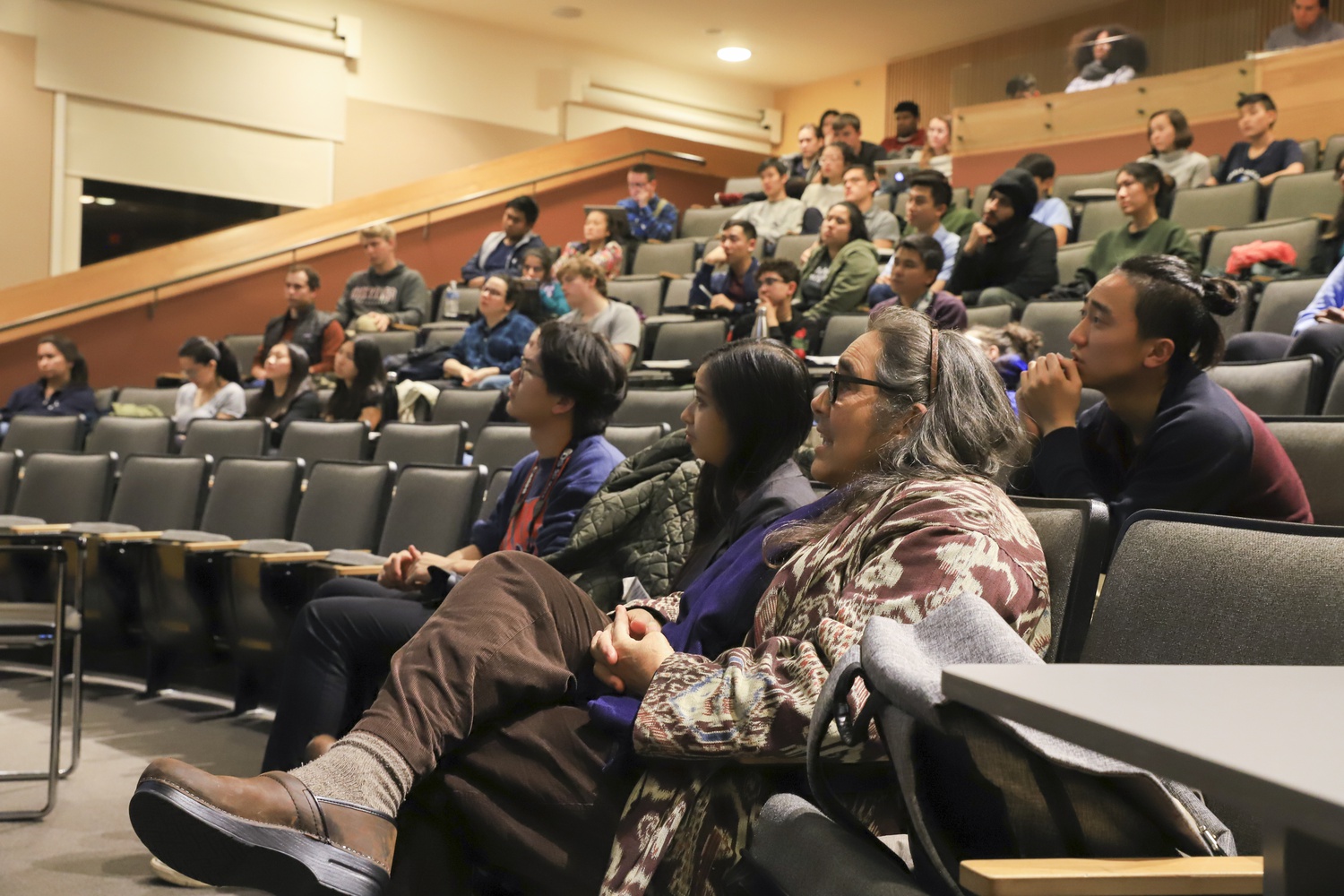 Students attended a talk where the implications of the possible construction of a telescope on Mauna Kea was discussed. By MyeongSeo Kim
By Meena Venkataramanan, Crimson Staff Writer

More than 50 people gathered Monday evening to discuss ongoing protests against the proposed construction of the Thirty Meter Telescope on the Mauna Kea summit of Hawaii’s Big Island.

Speakers at the event debated plans for the telescope, which have come under fire from thousands of Native Hawaiians in part because of Mauna Kea’s cultural and religious significance. The Task Force on Asian and Pacific American Studies, Student Astronomers at Harvard-Radcliffe, and Native Americans at Harvard College co-sponsored the event.

Since July, protesters have blocked the single access road at the base of Mauna Kea, preventing construction of the Thirty Meter Telescope and largely shutting down operations at the existing telescopes on the summit.

Jocelyn L. Doane, the public policy manager at the Office of Hawaiian Affairs, weighed in via Skype call during the event, arguing that astronomical development on top of the mountain by various universities and research institutions has come at the expense of cultural stewardship.

“Many Native Hawaiians believe that Mauna Kea is the home of many gods,” she said. “Mauna Kea’s cultural, environmental, and historic development should inform its use and management.”

The University of Hawaii, which is overseeing the project, has stated on its website that the telescope’s construction follows all applicable laws, and the university has received a permit for the telescope’s development.

“I would really encourage everyone to learn as much about this issue as possible,” University of Hawaii Communications Director Dan Meisenzahl wrote in an emailed statement. “It’s not a black and white issue. It’s fair to say that certainly not all Native Hawaiians are opposed to the telescope on Mauna Kea.”

Approximately a dozen telescopes are already operational on the summit. The Submillimeter Array, one of the existing telescopes, is partly operated by the Harvard-Smithsonian Center for Astrophysics.

“The SMA appreciates the privilege of operating on Maunakea, one of the few places on earth where submillimeter astronomy is possible,” Radford wrote. “The SMA is committed to full compliance with all terms of its permits and agreements.”

Though the Association of Universities for Research in Astronomy — of which Harvard is a member — is associated with the international partnership that is developing the Thirty Meter Telescope, the University has not invested in the telescope, according to Harvard-Smithsonian Center for Astrophysics Director Charles R. Alcock.

Ku’ulei Perreira-Keawekane, who has participated in the protests, said at Monday's event she was motivated by her religious beliefs and way of life, which she believes have been ignored by the telescope’s developers and Hawaiian government.

“Aboriginal people of Hawaii are continuously ignored, and that accumulates to cultural trauma, which I am suffering from as a Native person in this day and age, and my relationship with the Mauna has helped me to cope with these things,” Perreira-Keawekane said.

Some critics have portrayed the controversy over the telescope’s construction as a debate between science and religion — a framing Doane called “ridiculous.”

TAPAS member Julie S. Chung ’20, who helped organize the event, said she believes in the importance of having a conversation at Harvard about the protests in Hawaii.

“I think as an institute of higher education that obviously does fund and do a lot of science research here, it’s really important as students to see how much this issue has been about the purported benefits of science and knowledge but at the expense of Native Hawaiians,” she said. “To bring that conversation here is really important for us and I think also just the responsibility of TAPAS.”

Harvard Medical School student Nathan J. Nakatsuka ’12, who is a member of the Harvard University Hawaii Club, said he thinks the event facilitated an important conversation.

“I thought this was a really good event for a lot of people to understand what’s going on from a Hawaiian cultural perspective and how it relates to other issues,” he said.