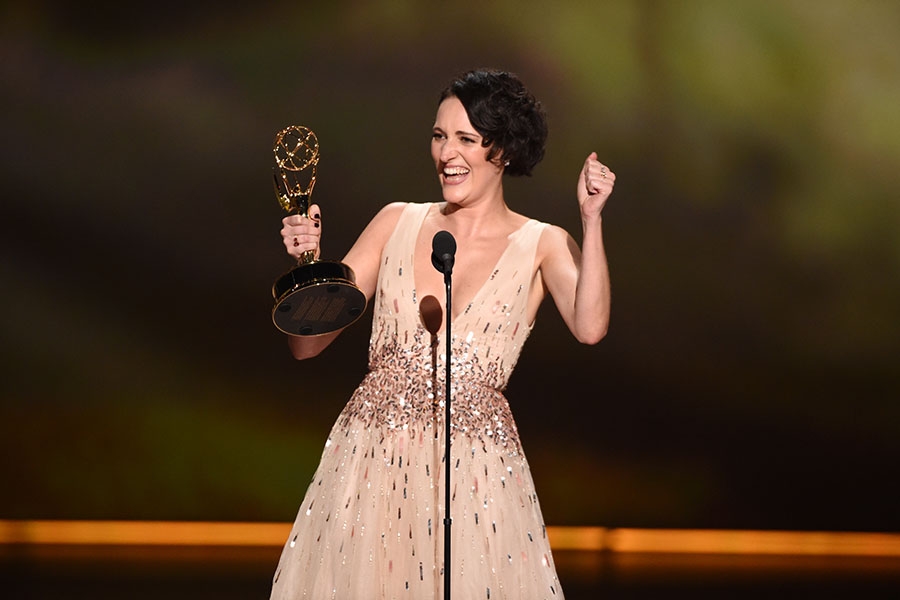 Phoebe Waller-Bridge accepts her award at the 71st Emmy Awards. By Courtesy of The Academy of Television Arts & Sciences
By John R. Our, Contributing Writer

In a surprising turn of events, “Game of Thrones” walked away with only two major awards Sunday night at the 71st Primetime Emmy Awards. Heading into the evening, many people expected “Thrones” to dominate TV’s biggest night, but the hit HBO fantasy series, which aired its very polarizing series finale in May, took home the awards for “Outstanding Drama Series” (the top prize) and “Outstanding Supporting Actor in a Drama Series,” won by Peter Dinklage, who set the record for the most wins in this category — and that’s it. The Primetime Emmys belonged to Amazon’s “Fleabag,” arguably the best show of 2019. The show itself won “Outstanding Comedy Series,” while the series’s creator, writer, executive producer, and star, Phoebe Waller-Bridge, won “Outstanding Actress in a Comedy Series” in a surprising defeat over front runner “Veep” star Julia Louis-Dreyfus, and “Outstanding Writing for a Comedy Series.” “Fleabag” director, Harry Bradbeer, also won the award for “Outstanding Director for a Comedy Series.” Look, it’s not often that a perfect TV show comes along, but “Fleabag” is flawless television, and it is comforting to see the Emmys actually recognizing excellence in the genre.

And the category is… Billy Porter! Porter, who portrays Pray Tell on FX’s wonderful “Pose,” about dance balls in the ‘80s, was just one of the many first-time Emmy nominees to pick up a trophy on Sunday night, winning “Outstanding Lead Actor in a Drama Series.” Porter is the first openly gay black man to win in this catergory, which is groundbreaking. Even more astonishing, “Pose” was nominated for “Outstanding Drama Series,” which is also a remarkable achievement given that the show features the largest cast of transgender actors in TV history. Clearly, this year is a triumph for representation, an issue that major awards have struggled with across the years. Other first time Emmy winners included Jodie Comer for BBC America’s “Killing Eve,” Julia Garner for Netflix’s “Ozark,” and Jharrel Jerome for Netflix’s “When They See Us.” Comer’s Emmy win might come as a surprise, too, given that she was up against more established actresses including co-star, Sandra Oh. However, it must be acknowledged that her nuanced acting as the much more complicated and interesting Villanelle satisfyingly puts her within their ranks. Garner beat out four “Games of Thrones” actresses, including Gwendoline Christie, though Christie should have won just for the scene in which her character, Brienne of Tarth, is knighted by Ser Jaime Lannister. That said, Garner is fantastic in “Ozark.” Jerome gave the best speech of the night, paying tribute to the exonerated Central Park Five, particularly Korey Wise, the man Jerome portrayed in “When They See Us.”

The Streaming Wars Are On!

If Sunday night’s Primetime Emmy Awards were any indication, the future of television belongs to streaming services. While HBO still led the night with nine wins in the major categories, Amazon was right behind it with seven wins. Netflix came in third with four wins, although when combined with the creative arts categories, the company took home 27 trophies to HBO’s 34 and Amazon’s 15. It’s clear that streaming is becoming a dominant force in the TV industry — synonymous with good television — which is why companies like Disney and Apple have announced their own streaming services. How the Emmys will react to these new services is a matter of time, but based on the commercials aired during Sunday’s ceremony, these streaming services have original content ready to go.

And the Host Is… No One!

The Emmys awarded some great shows. It’s too bad that the show itself sucked. This is largely due to the rudderless nature of the show, not that they have got rid of hosts. Bring back a host! No one wants to watch Bob Newhart remind Ben Stiller that he’s still alive or Adam DeVine sing about variety shows. For the sake of all of us, please bring back a host!