Mallrat, Allday, and Japanese Wallpaper Put Their Own Spin on Authenticity 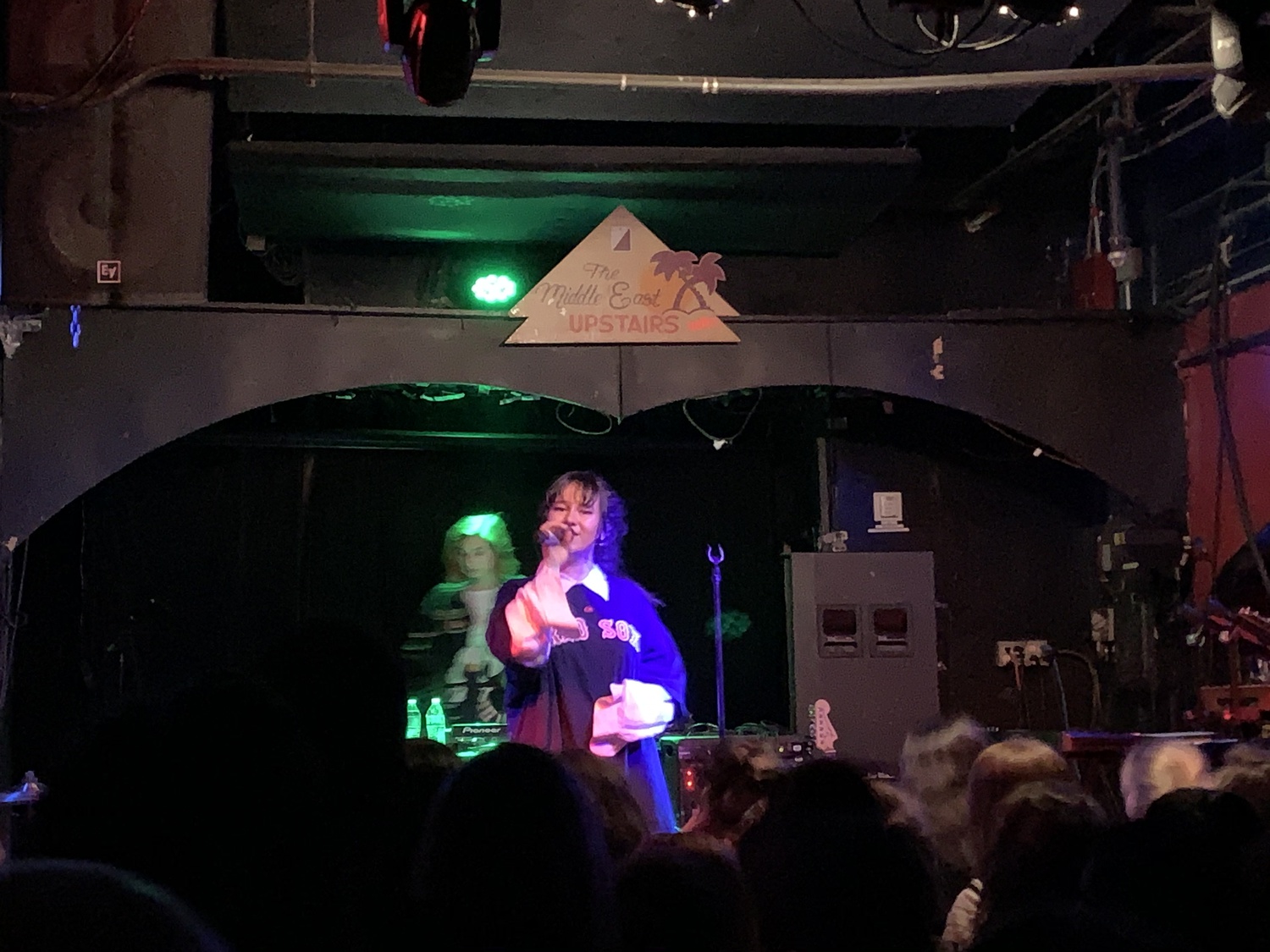 In the cramped-yet-cozy space of the Middle East Upstairs, Mallrat, accompanied by two supporting artists, Japanese Wallpaper and Allday, filled the hearts of her audience on Sept. 27 with her spunky, tongue-in-cheek delivery and relaxed, carefree aura.

A live set is not always conducive to facilitating an intimate experience with an artist, but Mallrat’s dreamy, organic stage present felt less like a scripted recital and more like like an impromptu dorm room sing-along with a close friend — making the performance uniquely personal.

Japanese Wallpaper, the first opener of the night’s trifecta of Austrailian indie artists, had the wherewithal to continue the show through some technical difficulties. With energetic guitar strumming contrasting his calm demeanor, the musician kicked off the casual mood of the night with “Cocoon,” proceeding to play his new release “Tongue Tied,” among others. It is typical to feel the rush of a beat through your chest, but unnervingly exceptional to experience this feeling alongside the artist in real time. Japanese Wallpaper’s lyrics “Though my feet don’t touch the floor / It’s the way I fall to the ground” evoke this sensation.

Allday picked up right where Japanese Wallpaper left off, slowly marking the transition from standard indie-rock to more eclectic variations of the genre. Incorporating Japanese Wallpaper on the keys, Allday intertwined hallmarks of rap with the soft lilts of an Australian accent on tracks “Right Now,” “Sides,” “Lungs,” and a collaboration with Wallpaper, “In Motion.” Allday bounced around the stage, brimming with the fervor of having something pressing to say, and continued to convey this in the song “Restless”: “Where did this come from darling? / Out of the blue / Did you only love me when you had nothing else to do?” In the vein of authenticity, he acknowledged his unpolished performance style: “It’s fucking illegal for you to laugh at my dance moves!” he said.

When Mallrat graced the stage, she was warmly welcomed — both by the audience and the mellow glow of carefully-colored lighting. Her delightfully simple and unperplexing lyrics do a favor for newcomers who might not know the lyrics by heart, thus making the performance accessible for dedicated fans and newbies alike.

Relatability that feels genuine can be difficult ground to navigate, but Mallrat accomplishes it seamlessly with her deadpan take on rap-singing and unchoreographed, haphazard shrugs and hair tosses, not with attitude, but with humble self-assurance.

In between carefree pirouettes, Mallrat started off her set with “Sunglasses,” one of her earlier songs. She played it raw and syncopated, and when she sang, “Everyone around you wears the same sun-glass-es,” her appreciation for originality shone not just in her lyrics but also in her unique delivery. In “When I Get my Braces Off,” she perfectly embodied the restless yet awkward nature of the teen spirit with repetitions of the lyric “I bet you hate what I like,” each iteration sung with a distinct flavor of sardonic angst.

In “Nobody’s Home,” a punchier song and Mallrat’s closest intersection with full-on pop, she still managed to interpolate her deadpan delivery into manufactured beats. Her smooth, understated murmurs enthralled while she rushed the line, “Maybe it's not about me and what I wanna see / Let me know what you want it to be” in one monotone breath before the beat drop.

“Charlie,” a tender song welcoming Japanese Wallpaper back onstage for acoustic accompaniment, showcased Mallrat’s performative range. She channeled the subtleties of independence and newness in ways she had not explored in her prior songs. As she sang, “I just want coffee for breakfast / I just want warm cups of tea / I just might love you forever / I hope you warm up to me,” the lights glowed without flushing out the stage, all while Mallrat transformed the mundane into the meaningful.

Towards the end of the show, Mallrat confessed that the length of her performance was limited by her small repertoire. But she is a testament to the fact that it is neither length nor perfection, but rather everything undeliberate that makes a live performance so much richer than a recording. The spur-of-the-moment, nuanced exhibition of a budding artist’s creative potential unfolding onstage was fulfilling enough.

—Staff writer Jessica Dong can be reached at jessica.dong@thecrimson.com.