Leading and Learning Together 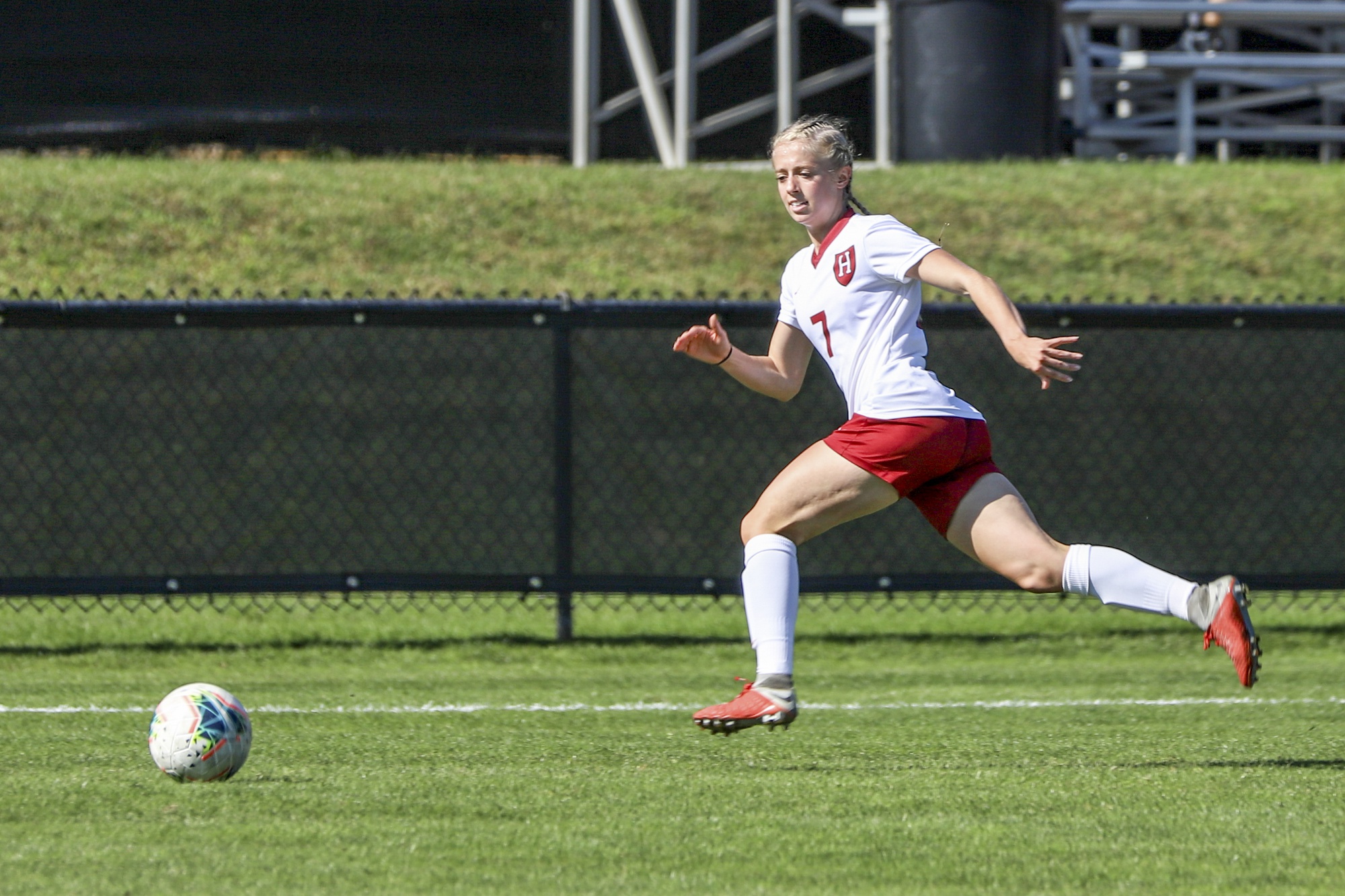 Soccer co-captain Megan Tveit is one of six roommates in Adams House, who are all captains of varsity teams. By Quinn G. Perini
By Isabel A. Levin, Contributing Writer

Twenty percent of Harvard undergraduates play a varsity sport. Of these, only 41 undergraduate women captain varsity sports teams. Six block together, meaning an astounding 14.6 percent of all female varsity captains live in the same suite in Adams House. How exactly did this group come to be, and what’s it like living there?

The group consists of tennis co-captain Lexi Milunovich, squash co-captains Amelia Henley and Gina Kennedy, soccer co-captains Meghan Tveit and Kimaya Cole, and fencing co-captain Natalie Yang. Hailing from California to the United Kingdom and anywhere in between, each is high-achieving in their own right.

Last year, Henley and Kennedy both finished their squash seasons undefeated. Both were named first team All-Ivy, and Kennedy won the women’s individual national champion. Meanwhile, Yang finished 14th in the NCAA Championships in foil, the Crimson’s best finish since 2006. Milunovich bounced back from an injury last season to help bring the tennis team to second place in the Ivy League. Cole helped the soccer defense to six shutouts last season. Tveit represented Harvard at the 2019 NCAA Student-Athlete Leadership Forum. Together, they form an incredible group of elite student-athletes.

The girls met their freshmen year and connected through their mutual love of sports and their shared passion for improving the athletic community. Due to their similarities, Milunovich explains, “we naturally gravitated toward each other.” They grew closer throughout their freshmen year and created an amazing support system for one another. All six wanted to get involved in the student athlete community at Harvard.

“We laughed when we showed up at the same meeting representing our teams on the Student Athlete Advisory Committee […] We had a lot of suggestions!” Milunovich recalls.

A mutual desire to enhance student-athletes’ college experiences helped the group bond, as each wanted to find ways to improve student-athlete life at Harvard. The transition from high school to college athletics, while exciting, can also be daunting.

In high school, Milunovich competed in junior tennis at a national level. She loved both the physical challenges of the sport and the intellectual strategy. While many people balk at the notion of high-pressure situations, Milunovich enjoys performing under pressure. She also loves the camaraderie that comes from both playing doubles and being part of a team.

“It was never a question of if I would play [tennis] in college, only where,” she says.

“Being a college athlete means balancing [sports, academics, and extracurriculars] while staying committed and dedicated to your team,” Cole says. Despite the struggle of performing such a balancing act, the rewards outweigh the difficulties.

While time management and course scheduling can be particularly challenging, Milunovich emphasizes how inspirational it is to play “for something bigger than myself.”

Though all varsity athletes at any university have the unique perspective of representing their institution both to their peers and to the nation, captains especially play a central role in publicizing their team to the school body, and their college to the rest of the world.

“One of the most valuable things I’ve learned from my roommates about being a leader is leading by example and modeling the ways you want the rest of the team to act,” says Cole.

As leaders, captains shape the dynamic of the team. Each girl learns valuable leadership skills from the others, and all their teams benefit.

“We learned from each other and still are learning,” Milunovich says.

The most valuable skill her roommates have taught her is resilience. Last season, Milunovich missed time due to an injury. She emphasized how supportive her roommates were, since they all understood how difficult an injury can be, both physically and mentally. Having such a close group of roommates who share similar experiences helped create that uplifting environment.

The girls do try to attend one another’s games and matches, though during their seasons their schedules can get hectic. Sometimes they play at the same time or are travelling with their teams. However, they always find time to catch up on one another’s seasons later.

“All of my roommates excel not only in their sport, but also in academics and within their other extracurriculars, and still find time to hang out with friends,” Cole says.

Considering the twenty plus hours a week they spend on athletics alone, this is quite a feat.

Now heading into their senior year, this Adams House blocking group prepares for one last season of collegiate athletics. The soccer team is currently 7-2, with an upcoming game against Yale. The tennis team is preparing for the ITA All-American Championships after a strong performance at the Harvard Fall Classic. Squash matches will begin in December, while fencing kicks off with a November 16th tournament. Milunovich, Cole, Tveit, Henley, Kennedy, and Yang are all excited and ready to lead their teams to winning seasons.