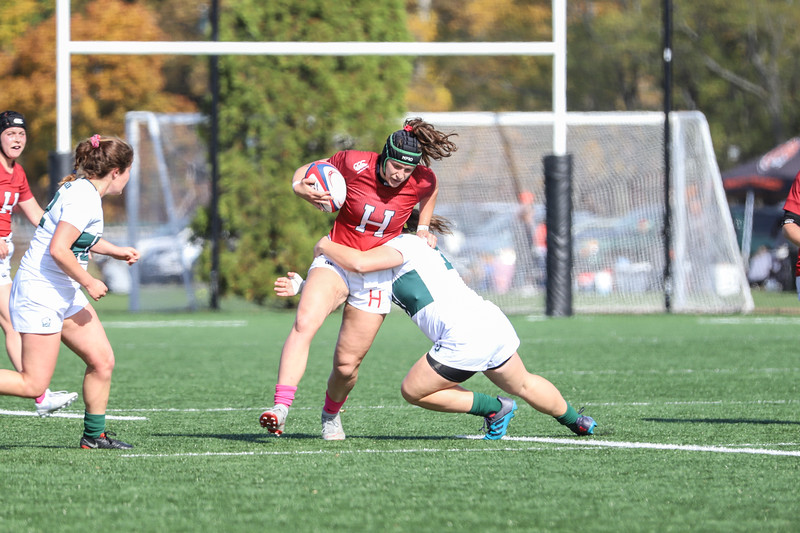 With a revenge victory over Dartmouth, Harvard advanced to the NIRA Championships to take on Army for the crown. By Quinn G. Perini
By Lucy Connor, Crimson Staff Writer

In its third matchup of this season, the Harvard women’s rugby team got its revenge and defeated Dartmouth in a stunning victory, 23-22, this past weekend in the NIRA semifinal game. After defeating the Big Green during the regular season, the Crimson fell to Dartmouth last weekend in the Ivy League Championship. Fresh off a devastating loss just weeks before, Harvard was able to top Dartmouth, earning a spot in the NIRA National Championship this coming weekend.

“We went out with the mentality that we know we can beat them,” junior Milan Roberts said. “We beat them earlier in the season and we just felt that we had nothing to lose. It could have been the last game of our season, so we just really wanted to put everything on the line.”

Both teams realistically entered the game with similar mentalities, and the NIRA semifinal game turned into a nailbiter as expected. Tries and penalty kicks went back and forth as both teams struggled to completely take control of the game. The Crimson found the board first with a penalty kick by Roberts, sparking confidence amongst the Harvard team. However, the Big Green responded shortly after, and extended its lead to 12-3. Unwilling to let their heads down, Harvard maintained its intensity with tries from senior captain Emily Prentice and Sofia Fella to regain the lead, 13-12.

“There were definitely moments of frustration,” Roberts said. “But ultimately, we just kept working as a team and driving the ball forward, getting small meters and elevating on small victories we had throughout the game.”

In the second half, the momentum shifted back into Dartmouth’s favor, as they put back-to-back tries on the scoreboard, taking back the lead, 22-13. With 25 minutes left to play and down 9 points, the Crimson managed to ignore the feeling that the game might be slipping away and recollected itself.

“There was definitely a shift from when Dartmouth scored a try with about 25 minutes left in the game,” junior Erin Wright said. “Our headspace really shifted: we started to think, ‘No more. This game is ours and we’re taking control of it now.’ It felt as if we looked at the scoreboard as a team and all believed that there is plenty of time left to complete the job we came here to do.”

After a dominating stiff arm and a determined dive into Dartmouth try zone, Delia Hellander cut the Dartmouth lead to four points with about 17 minutes left. A conversion kick from Roberts made the score 22-20, a score that would not change for the subsequent 15 minutes.

“We just continued to focus on our communication and trusting one another,” Wright said. “We especially focused on being resilient in the face of adversity that we knew we would face going into the game.”

The team remained resilient throughout the second half, maintaining constant pressure and attacking the Big Green defense. With about a minute left and still down two points, Harvard had the opportunity to take the lead with a penalty kick from Roberts.

“Just do not miss it,” said Roberts when asked about what was going through her mind before the kick. “It was right down the middle, so I really had no excuse to miss. I was just thinking, ‘Do not do something stupid like trip. Just make it through.’”

Cool under pressure, Roberts kicked the ball straight through, giving Harvard a one point lead with 1:15 to go. The Crimson regained possession and kept control until the time ran out.

“Winning by one point with one minute left was definitely shocking and such an exciting way to win the game,” Roberts said. “It was just a feeling of absolute relief. There was so much excitement and happiness throughout our entire team.”

Harvard played a great team game. The team chemistry and trust within one another was apparent and absolutely a factor in this huge win.

“The entire team stayed connected, upbeat and confident even through the rough moments,” Wright said. “We never got down ourselves. We played for each other and we played as a team.”

The Crimson will host Army West Point in the NIRA National Championships this weekend, Sunday, November 17.

“We will just be focusing on playing from the heart once again and giving it our all,” Wright said. “We are going to play some really great and some really fun rugby this weekend.”