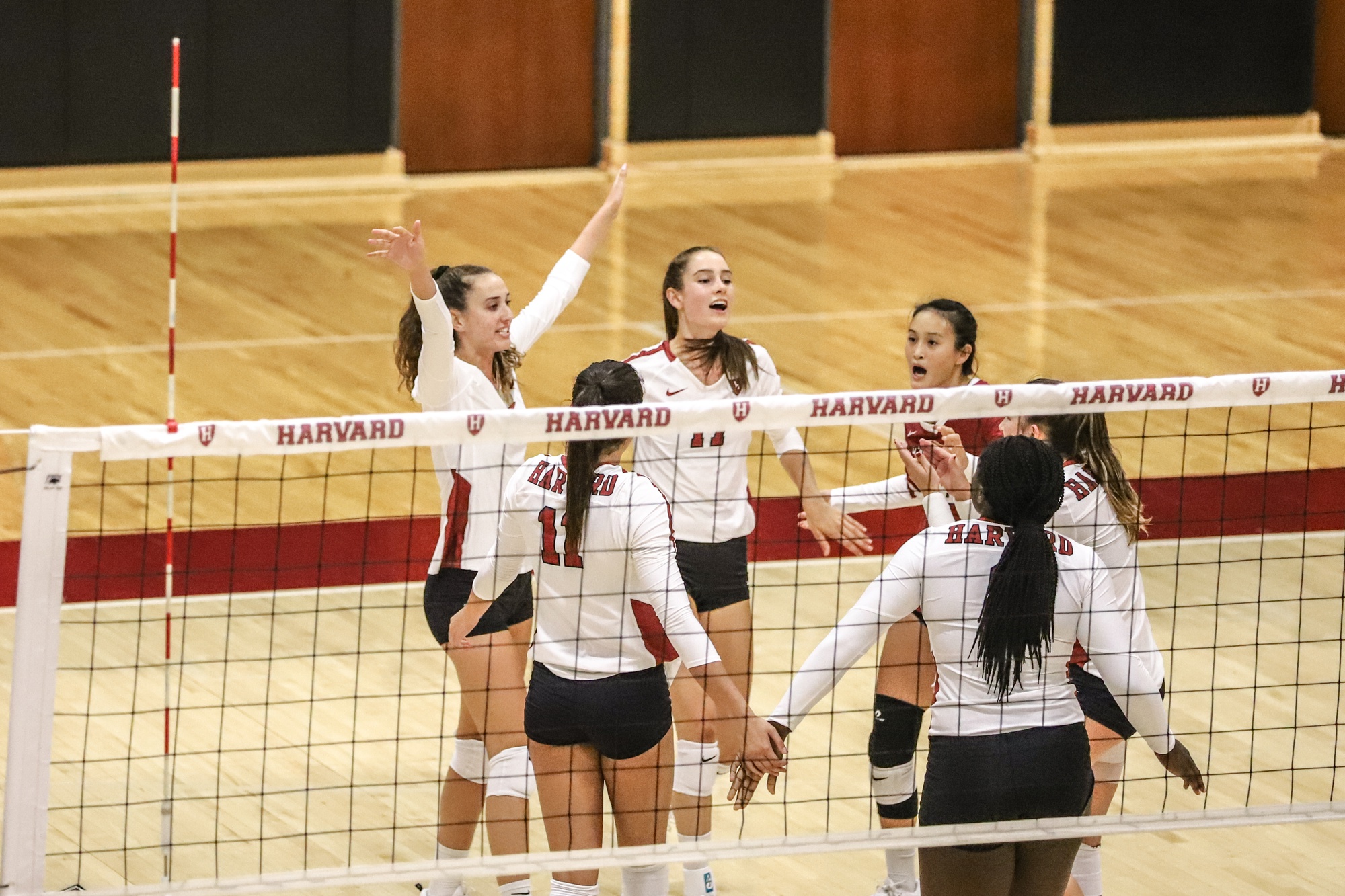 The Crimson upset Yale on Saturday after previously falling to the Bulldogs in straight sets. By Quinn G. Perini
By Mackenzie Condon, Contributing Writer

The last time the Harvard women’s volleyball team set out against its Ivy League foe Yale, it left without much to celebrate after losing in straight sets. On Saturday, just one month later, the Crimson found itself on the other side — the underdogs ousted Yale 3-1 in a dominant upset in front of its home crowd.

To add to the matchup’s atmosphere, the Malkin Athletic Center was roaring with excitement as it was not only Freshman Parents Weekend but also the volleyball team’s Alumni Weekend.

“Having all of our alumni in town cheering us on and having a packed crowd for Parents Weekend made it pretty special to get to feel everything come together in that kind of an environment,” said senior captain Maclaine Fields. “We were definitely feeding off of it.”

Harvard (5-14, 3-7 Ivy League) set the tone in the first set for what would be a grueling back-and-forth matchup. The frame began with strong play for both the Crimson and the Bulldogs, but as time passed, Yale began to show why it was the favorites going in. But the Crimson was not to be overpowered so quickly. Clawing its way back in a drawn-out set, Harvard clenched the necessary two-point lead on its 30th victorious point of the match.

The Crimson followed up its gritty play with a successful 25-20 second set, this time leading throughout the frame. Junior Mindie Mabry, who ended with 20 kills for the night, dominated the play in the second set, coming in clutch by ending multiple critical rallies with what proved to be many untouchable spikes.

Yale refused to let the match end in straight sets, stealing the third to stay alive. However, it could not sustain the momentum it had earned.

In the fourth set, Harvard was forced to regather its composure in order to solidify its victory. The score was often tied, but the Crimson handled the pressure after eventually pulling away and locking up the match with a 25-20 score for the final set. Weaknesses that have plagued Harvard in previous matches this season were not on display this time for Yale to exploit.

“It was one of the first times when everyone had such a good game, and it truly was a real team effort,” Fields said. “Seeing so many people step up at the right times and at the same time was pretty special. The season has definitely been rough so far, but we’ve felt like we have had the right pieces to be a great team and it was frustrating in past games this season when it wasn’t coming together.”

The first-years were part of the pieces that fall into place. First-years Katie Vorhies and Ashley Wang had 14 and 12 kills on the day, respectively. Classmate Ava Lung, who stands at six feet tall, had a dominant presence at the net with 11 blocks.

With four Ivy League matches left to play, the hope for Harvard is to carry this momentum that they had been searching for all season.

“We’ve known we can be good and we were happy to finally show it,” Fields said. “Now that we’ve made out statement by taking down the top team in the league, the goal is to win-out with the rest of our matches.”

Harvard will travel to play Penn this Friday and Princeton this Saturday. The weekend after will be the end of its season, with its two final contests against Cornell and Columbia set to be played at home.