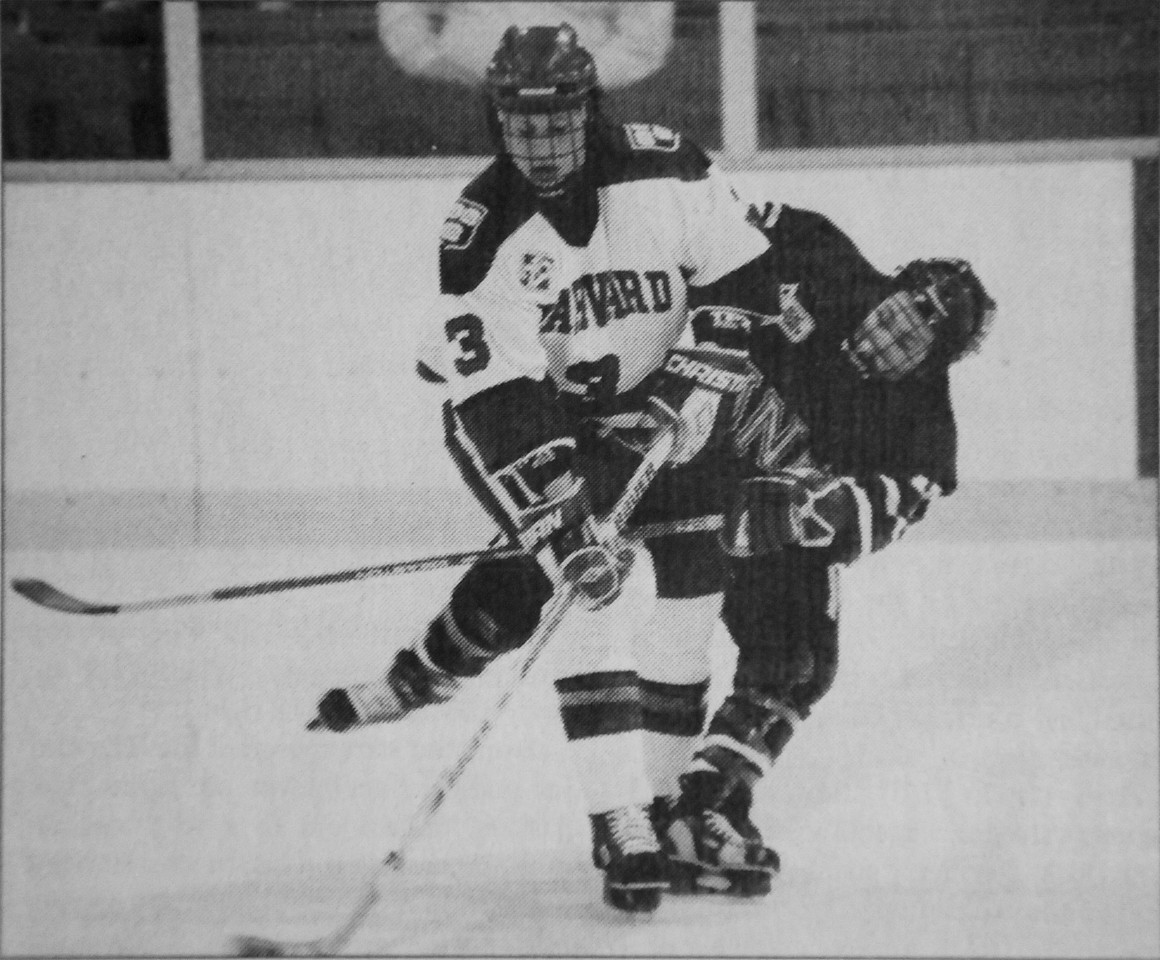 March 27, 1999. Minneapolis, Minn. Tension permeated Mariucci Arena as the two best teams in women’s hockey — the No. 1 Harvard Crimson and the No. 2 UNH Wildcats — entered overtime, locked at five apiece. By the end of sudden death, a national champion would be crowned.

Facing that pressure-packed scenario, Harvard remained calm. The Crimson had entered the title game with 32 victories under its belt, including an overtime win against UNH one week earlier in the ECAC Championship. The battle-tested team knew what to do.

“In terms of that intermission [before overtime], going in, I think it was more a matter of ‘We’ve got this,’” said AJ Mleczko, Harvard co-captain, two-time Olympian for Team USA, 1998 gold-medalist, and current New York Islanders analyst for MSG Network. “We knew that we just had to spread them out and use our depth. We had so many good players on that team.”

Another one of those players was freshman phenom Jennifer Botterill, the ECAC and Ivy League Rookie of the Year. Botterill posted a prolific Olympic record of her own, representing Canada in four different Olympic Games and taking gold in three of them. She and Mleczko were fierce rivals in the 1998 Games but would join forces in the 1998-99 season as linemates, working with future Canadian Olympian Tammy Lee Shewchuk to compile astounding numbers in the process. Twenty years later, the Mleczko-Botterill duo remains intact — Botterill also works as an Islanders analyst for MSG.

“That line [Mlezcko, Botterill, Shewchuk] was one of the best lines in college hockey ever, and there’ve been a couple others since,” coach Katey Stone said. “What those kids were able to do together ... was huge. They weren’t all great friends all the time, but they knew that they were the right three to play together.”

In the crucible of overtime, Botterill would prove herself worthy of her many accolades. Collecting a pass from Mlezcko, Botterill cracked the tie with a clutch finish that marked her eighth game-winning goal of the year. Mlezcko would cap off her college career with the title-clinching feed — her 77th assist of the season. 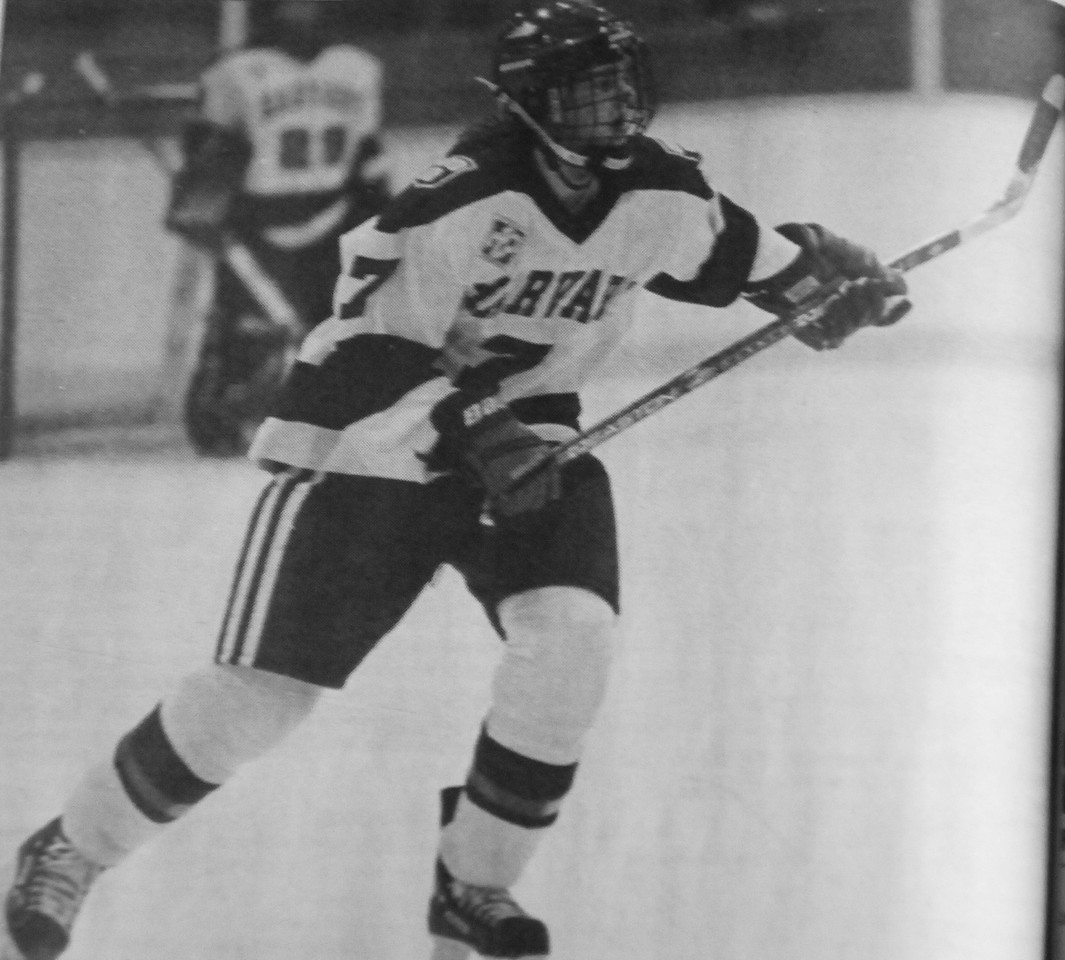 Forward Jennifer Botterill glides across the ice during a game in the 1999 season. By Henry Zhu

“One season, all of that happens, and the swing of pressure could’ve been heavy on those kids, but it wasn’t,” said Stone, recalling that moment when puck met net. “They couldn’t have been more excited, more proud.”

With the national championship, Harvard hockey had arrived and was here to stay. In subsequent years under Stone, the Crimson has continued to produce Patty Kazmaier winners, cultivate Olympians, and, as recently as 2015, appear in national championship games. That 1999 game-winner was the watershed moment.

“It was an incredibly unifying experience — going that deep into the playoffs, going 33-1,” Mlezcko said. “I think there were so many things we had done along the way. We won the Beanpot. Then we won the Ivy. Then we won the ECAC. And then we won the national championship. We were ticking off the list, but none of them were runaway victories. The Beanpot was overtime, the ECAC Championship was an overtime game, and then the national championship was an overtime game. There was a lot of unity that had to happen there.”

Behind the slew of nail-biting, sometimes improbable victories was Stone. In 1994, Stone, herself a UNH graduate, took the top spot for Harvard after an impressive record coaching high school hockey teams. During her first season in Cambridge, the Crimson went 12-11-2. The next three years would see Harvard finish under .500.

“Going into that year, Harvard had always been a building program,” Mlezcko said. “The big three that nobody could touch were UNH, Northeastern, and Providence College.”

Then came the 1998-99 season, and with it, unprecedented dominance. A November loss to Brown interrupted a fast start, but the Crimson would rally around the setback and never turn back.

“November 14th. I remember the day. Down at Brown, and we lost 4-2, and I really didn’t think we should’ve lost that game,” Stone said. “It was a wakeup call for us. We had been sort of off to an early cruise with that team, and then we went down to Brown, and they beat us. After that, there was a very different attitude in the locker room.”

Claudia Asano Barcomb, co-captain of the 1999 team and current director of athletics and girls’ varsity ice hockey coach at The Governor’s Academy in Newbury, Mass., underscored that, after the November Brown game, the team never wanted to experience the feeling of a loss again.

“[After the game,] AJ and I looked at each other, sort of aware, and just said, ‘Well, you know, we’ve got to prove ourselves,’” Asano Barcomb said. “We [didn’t] want this season to be, ‘Who did you lose to?’ We wanted it to be, ‘Who did you beat?’ … I remember us saying that this is our motivating day. We lost to a team we didn’t think we should have. So, it was a big day.”

That different attitude transformed an impressive roster, staffed with Olympians and Olympians-to-be, national team members, a number of determined players, and one of the best-ever offensive lines in college hockey, into a steamroller. After opening 3-1, the Crimson would win all 30 of its remaining games, including every available championship.

“We weren't without issues on our team,” Stone said. “We had Olympians, and kids that weren’t Olympians, and good college hockey players. It was always a balance, but at the end of the day, they did everything they could for each other, and that’s, I think, the single biggest reason why we won. They were very unselfish.”

Despite the all-but impeccable record, the season was no cakewalk. Junior goalie Crystal Springer broke her collarbone midway through the season, forcing rookie Alison Kuusisto into the net for a series of crucial regular season games, including the Beanpot.

“Winning the Beanpot the way we won it was telling to me that we were going to figure this out, we were going to make it happen,” Stone said. “We were down [in] the semifinal … and then were able to find a way.”

Springer returned in time for playoffs, leading Harvard to an ECAC championship and seeing the Crimson through to the semifinal game. Then, with under five minutes remaining and Harvard all but assured a ticket to the national title match, misfortune struck.

“Crystal Springer goes out to play this puck behind the net, routine play, and gets crushed by a Brown player, snaps it again, because your collarbone’s really not as strong after,” Stone said. “Less than 24 hours later, you had your backup goalie in a national championship game.”

The Crimson, though, was ready. Harvard had played the Wildcats three times earlier — twice in the regular season, and again in the ECAC Championship — and beat them each time. That initial win marked the first time a Crimson squad had ever bested UNH.

“Because it’s a storied program, it’s a benchmark from a coaching standpoint,” Stone said. “To be able to beat them twice in the regular season and then again in the ECAC playoffs, by that point, I was like, ‘You know what, we’re good. We’re good, and we can beat them any day.’”

The Crimson started off cold in Minnesota, trailing UNH from the outset before turning up the heat. By the start of the third, Harvard held a 4-3 advantage. Then, with 10:38 left in regulation, Harvard sophomore Angie Francisco buried a power play score to take a 5-3 lead and seemingly put the game away. The Wildcats, though, had fuel in the tank. At 5:19 remaining, UNH scored, and the equalizer came less than three minutes later.

The overtime, which lasted 8:01 before the victor was crowned, required relentless hustle and intense focus from all involved. In the end, though, it came down to a line of three Olympic gold medalists — the first triumvirate in college hockey history to combine for more than 300 points in one season — to bring it all home: a dish from Mleczko, a shot from Botterill, and a championship for Harvard.

“I think the proudest thing for me — and we just had a celebration of the ’99 team, and many of our players were able to come back — is just how connected they were, and how connected they still are,” Stone said. “And I just think that that’s a testament to their character and how much it meant to them.” 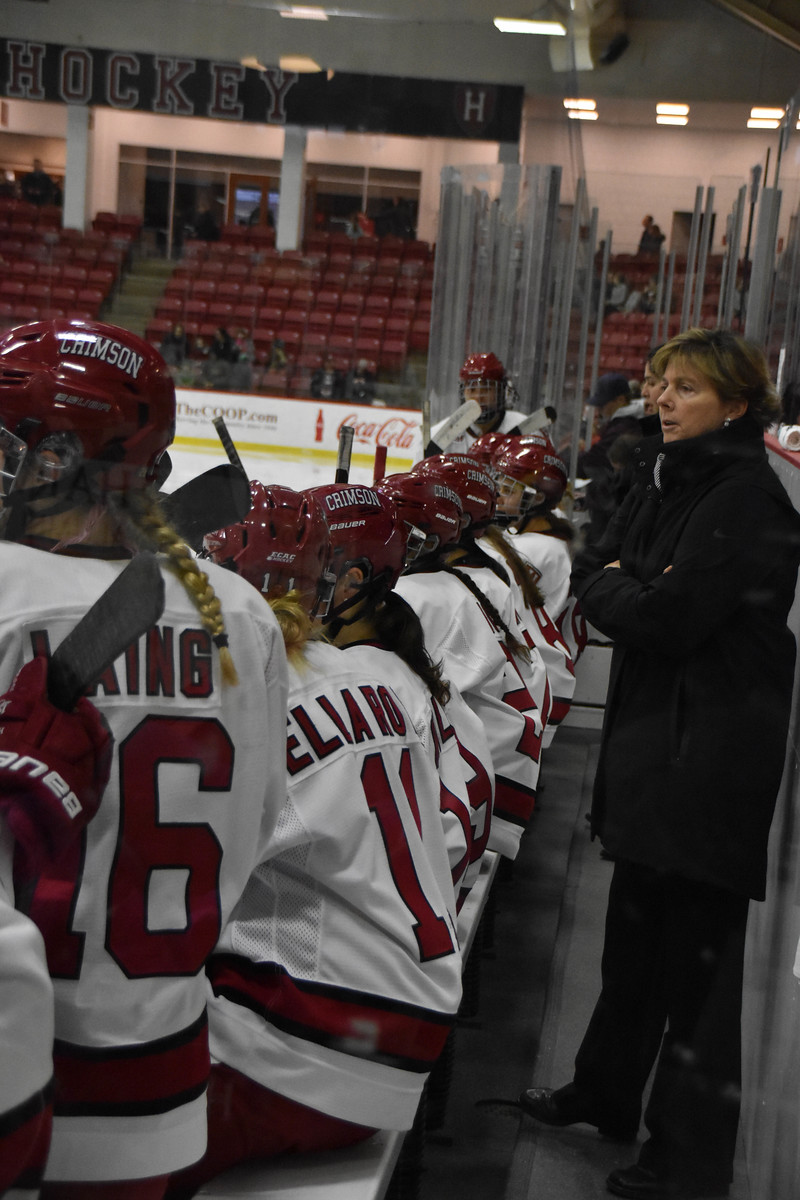 Katey Stone has no shortage of experience, as she closes out her 24th season at the helm. By Quinn G. Perini

Not only did the national championship have major implications for the program — it also forged lasting relationships among players. The team remains tight, and communication is frequent.

“My closest friends are on that team, but our family expands beyond just the teammates I played with,” Asano Barcomb said. “We are a big family, Harvard hockey, the women’s side in particular. We pick each other up when we’re down, and we boost each other up when there’s a lot of success.”

The lessons learned from the national championship also carried implications that applied to future hockey careers and to life. Mleczko, already an Olympian, would be returning to Team USA for the 2002 Games. With the national championship under her belt and the leadership skills she learned while playing at Harvard, she had a renewed perspective.

“That year gave me a ton of confidence that I was able to carry back to Team USA,” Mlezcko said. “The confidence that I had handling the puck, the strength I gained, the conditioning, all that stuff…. Being a part of the Harvard hockey family is something that no one can take away.”