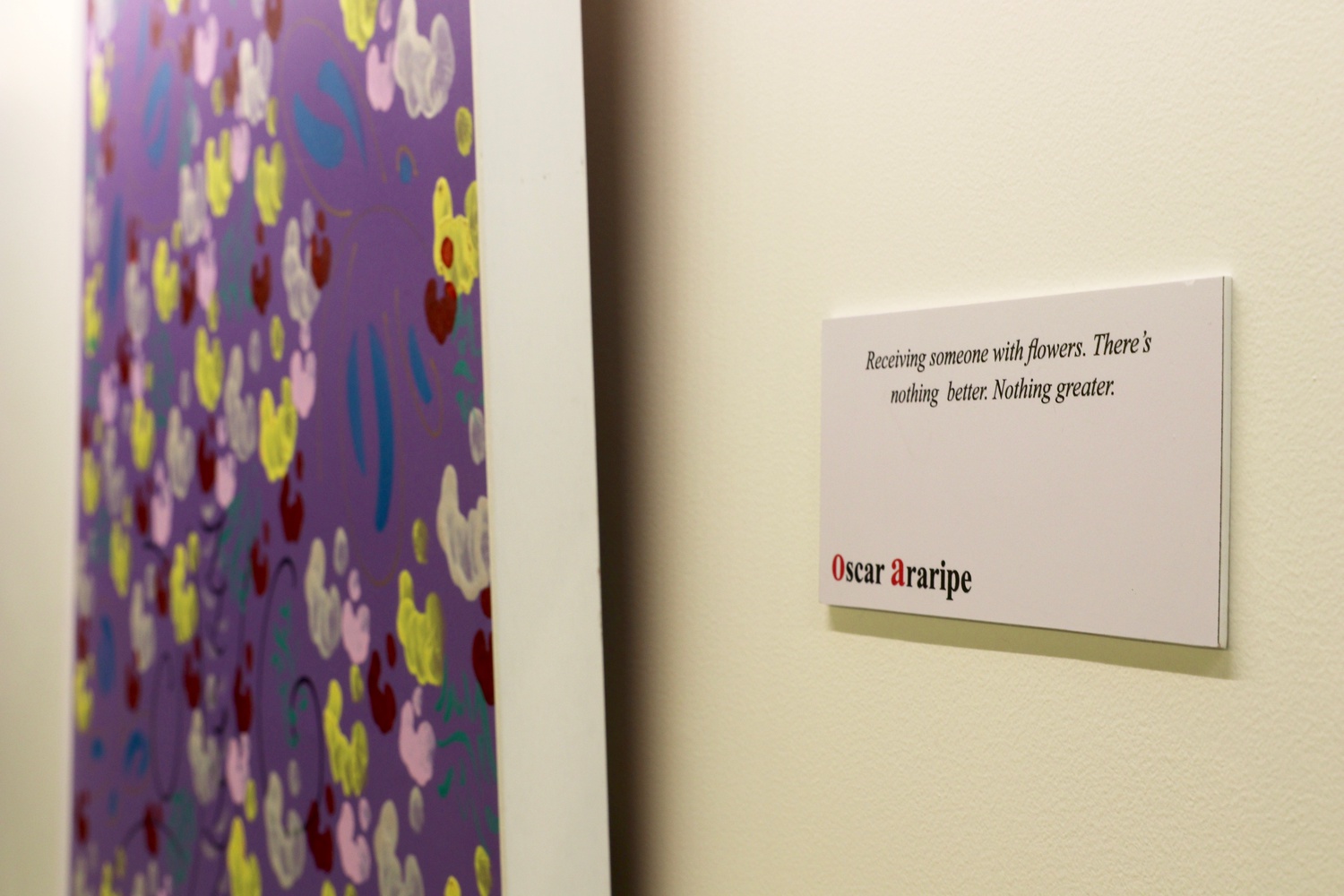 Araripe’s friend Peter B. Rodenbeck ’61 also spoke at the event, which was part of programming organized by Leverett House Faculty Deans Brian D. Farrell and Irina P. Ferreras to foster interaction between Araripe and Leverett students.

At the talk, Araripe said he had previously studied at Harvard in the 1960s to escape political persecution at the hands of the Brazilian military, which controlled the government at the time. He had been elected to the student union at the Federal University of Rio de Janeiro and was vocal in his opposition for the government. Araripe was not allowed to attend classes and feared arrest or death, according to a pamphlet distributed to audience members. 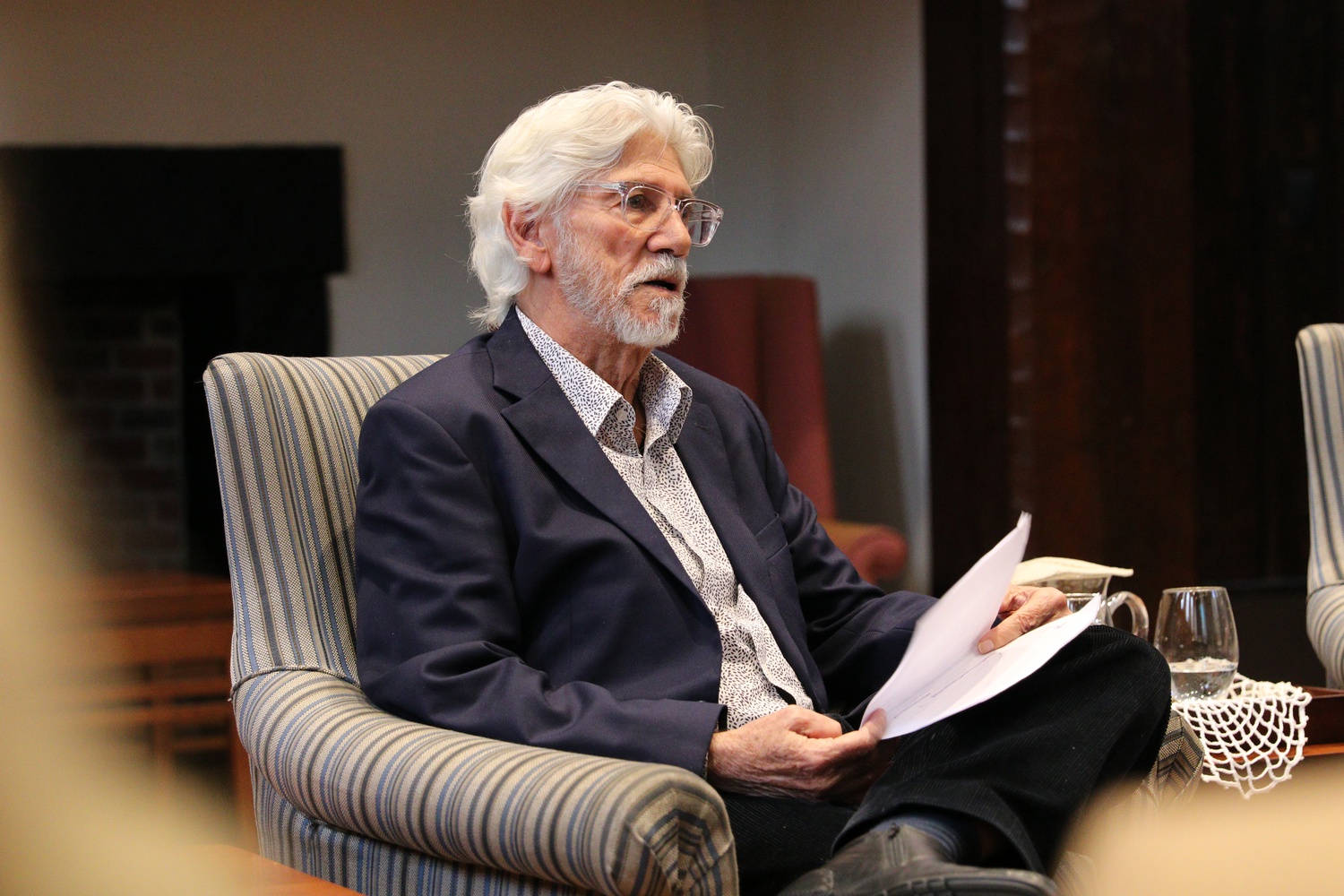 Artist Oscar Araripe talks about his art exhibit "Flowers for Harvard," which is currently on display in Leverett House. By Amy Y. Li

Reflecting on his return to Harvard, Araripe said he received two scholarships to study at the University, which “saved” his life.

“These scholarships was very important in my life,” he said. “It saved my life because at that time I was punished by the dictatorship in Brazil.”

Though Araripe was not a full-time artist at the time, he said his experience at Harvard shaped his appreciation for painting. He said he visited the Fogg Museum frequently.

“The first time I saw the great masters in painting was here at Harvard,” Araripe said.

Araripe added he believes art is important in all areas of life.

“I think that art gives the direction and the solution for all kinds of things — political, economical, social. I believe strongly in this. I work in this, in solutions through art,” he said. “I believe in the government of the poet.”

Leverett resident Luke G. Melas-Kyriazi ’20 said he appreciated the addition of Araripe’s art to the House.

“The hallway downstairs has always been kind of drab and just not very exciting. And now it’s really nice to have lots of stuff in it. Especially, the paintings are kind of colorful and they really liven up Lev[erett],” he said.

“I’m super for bringing more art into the house life,” he said. “It’s nice to have some environment where I feel less stressed. It adds something. I don’t know if its quantifiable.”

The weeklong programming on Araripe’s art is part of a new artist in residence program by Farrell and Ferreras, who stepped into the roles of faculty dean in July 2018. Farrell said he hopes to prioritize the arts and international culture in Leverett House.

“We thought, we have this beautiful gallery space, it was designed to hang art, and we just immediately thought this was a good way to start our series of residences, of artists-in-residence in the House,” Farrell said in an interview Thursday.

This past fall, Leverett hosted saxophonist Bill Pierce. Ferreras said the duo hope to host a new artist every semester, giving students the opportunity to engage with artists through lectures, workshops, and casual interactions in the dining hall.

“The idea mostly is to bring the people that visit Harvard to the houses too,” said Ferreras. “Because normally these people visit and they get advertised, but they don’t go to the houses...you’re at Harvard but you can be close to the students by going to the houses, not just in a big auditorium.”

“Our hope is that it gets to be embraced by the students and it’s all about making connections,” Ferreras added. “I don’t know if it’s something that’s being done in other houses. It’s something that came out of our passion.”