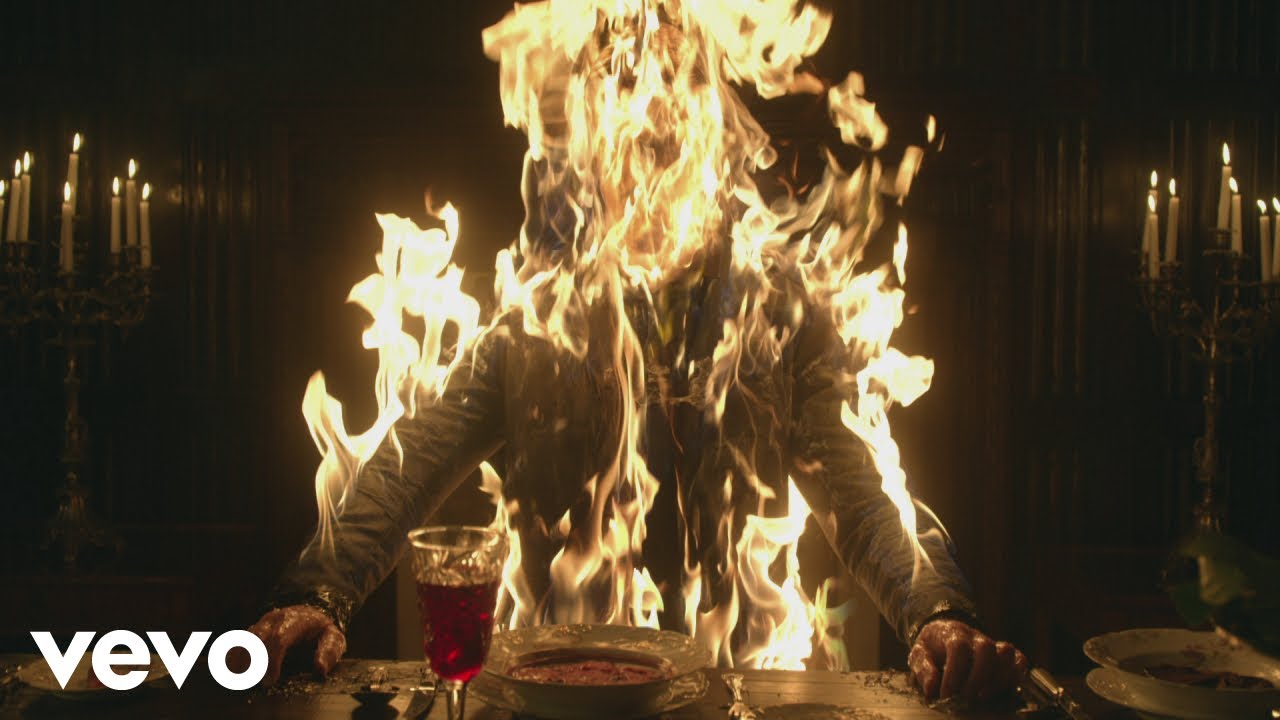 Considering the cover of Hozier’s new album “Wasteland, Baby!” features him resting, quite pensively, in an armchair underwater, it only makes sense that he would contrast this with the metaphorically — and literally — fiery, bold, and overall unsettling music video for his single “Dinner & Diatribes.” Released March 6 and directed by Anthony Byrne, this video does not shy away from the grotesque with a dinner party of bloody meat (and oddly enough, roasted marshmallows) as well as the body contortions and unnatural movement often found in a typical horror installment. With its dinner party straight from hell,“Dinner & Diatribes” stars one the new queens of horror, Anya Taylor-Joy, who plays the lead in both “The Witch” and “Split." Her presence alone is enough to set the uneasy, eerie vibe that haunts the entire video. Combining the rather upbeat, catchy tune with these creepy visual elements, Hozier has produced a video that is bound to leave fans energized, slightly mystified, and certainly anxious to Google search what exactly their beloved Irish singer was going for.

The song itself does not convey anything particularly gruesome: Hozier merely expresses his extreme attraction for a girl at a club and his frustration that he’s stuck having to converse at this party with her friends and do what is considered “polite” rather than have some quality alone time with his “honey.” Through the lyric “Hell is the talking type / I'd suffer Hell if you’d tell me what you’d do to me tonight,” the singer expresses his willingness to suffer through this small talk and these pleasantries that he clearly finds unbearable only because of the hope of some future satisfaction. Hozier sets the record straight himself when he tweeted, “Dinner and Diatribes is a playful number that tries to credit that feeling of relief when leaving any tedious social engagement” back on Feb. 15. Yet this playful lightheartedness seems to be replaced by something darker in the actual music video.

The video opens with shots of the dinner course of bloody skulls, slimy oysters, and fish heads accompanied by both the song title as well as the extra heading “A Seat at the Table.” The stuffy room of dark wood, candelabras, and dusty paintings where all the action will soon go down certainly fits with the lyrics’ message of meaningless social conventions and their unnecessary burden, an obvious representation of tired-out traditions and customs, yet the genuine romance that clearly shapes the song itself is nearly impossible to detect.

Almost unrecognizable with his iconic mane of hair slicked back, his beard shaved, and his teeth black and rotten, Hozier himself appears on screen, indulging himself with a burnt marshmallow on a stick and giving the audience a good view of the gooey treat between his black teeth. From his first creepy smile and sinister eyebrow-raise directed at Taylor-Joy’s character across the table, it becomes rapidly clear that Hozier is the menacing, antagonistic figure in this confrontation. Taylor-Joy begins flicking matches at this sleazy-looking man, hoping to inflict some sort of pain or possibly just to put an end to his relentless gaze, but all the matches burn out on impact.

Recognizing the futility of the matches, she attempts to walk away and presumably escape, but immediately, Hozier takes control of her body through some sort of mind control as indicated by his ever-intensifying gaze and her jerky, puppet-like movements. In one of the most ambitious shots of the video, the camera zooms in on Taylor-Joy face as she begins to flip upside down with the world blurring around her — which was achieved by strapping her into a contraption that would physically turn her 360 degrees around a camera. Quickly after, she is slammed back down into her seat by two waiters and forced to continue the confrontation. He continues to seduce her and draw her into his decadent lifestyle, causing her to crawl across the table top, but right before she reaches out her hand to caress his face, she aggressively resists once again. More of the dinner guests’ faces are revealed, all solemn, serious, and seemingly disinterested despite the drama and mental battle going on right before their eyes. A new waiter brings her another match, and this time, her flicking it at Hozier sets him into flames. As his body ignites — and yes, Hozier was actually set of fire for this shot — Taylor-Joy appears to gloat in her victory, amusedly roasting a marshmallow over this human campfire, when in a last-minute twist, one of the waiters sets her aflame too.

Considering the 2014 music video for Hozier’s “Take Me Church” relentlessly tackled the ugly issue of homophobia, it wouldn’t be out of character for this Irish artist to use “Dinner & Diatribes” as a mode of social commentary and a way to highlight social injustice. It isn’t particularly clear if the video is portraying the struggle of white feminists against a smarmy, arrogant patriarchy. Or possibly privileged versus marginalized groups of society more generally. Or even something else entirely. The initial subtitle of “A Seat at the Table” seems to indicate a struggle to gain a stake in society and possibly exert some new formed power — through this lens, Taylor-Joy could be seen as one of these disadvantaged groups of society battling against the condescending patriarchy, lingering racism, the one percent, or other privileged individuals (represented by Hozier), almost falling under the spell and mind control of this adversary trying to brainwash her. She wins her proper seat at the table by essentially murdering the obstacle in her way, but quickly the others turn against and point her out as a new target, indicating the very negative reciprocation of such a path towards power. Unlike with the song, however, Hozier provides no tweet to confirm the music video’s meaning and it is doubtful that he ever will. Regardless, this four-minute story depicts a girl seeking to destroy rather than reconcile with her enemy, and must face the dire consequences when this violent decision comes to harm her in the end.

–Staff Writer Samantha J. O’Connell can be reached at sam.o’connell@thecrimson.com