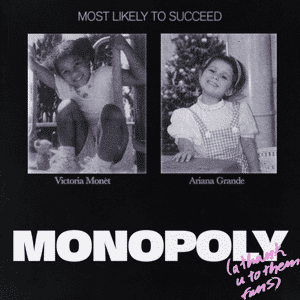 Ariana Grande and Victoria Monét’s new single “MONOPOLY” is the kind of song you can play over and over again and never get sick of. This infectiousness is the strength of Grande’s sparkling and swaggering pop-rap anthem — the latest iteration of the formula that produced smash hits “7 rings” and “thank u, next.”

“MONOPOLY” is a piece of polished pop machinery that’s easy on the ears. Unlike many mainstream rap songs, its dominant sounds are not thumping bass or gaudy samples; instead, the track rests on a soft bed of compressed drums, wispy organs, and an occasional playful glockenspiel. This sparse and unsurprising beat gives “MONOPOLY” a subtle scent of the prepackaged cheerfulness concocted in a boardroom. Despite this, its music video gives the track an air of authentic celebration in which Grande and Monét joke around in front of a vintage camcorder and make surprisingly un-forced references to online culture.

For the most part, the track’s themes are just as fun as they are benign. Grande and Monét cover ground well-trodden by generations of pop stars. They brag about their careers (“I've been on a roll, where you been?”) and their money (“Then we hit the bank, making them investments for the win”), then attack their haters (“Bad vibes, get off of me”). Like almost everything else about the track, these themes are predictable, but effective. Expect nothing more than entertainment and energy from “MONOPOLY,” and you won’t be disappointed.

At the beginning of the chorus there is one short line that makes it impossible to consider this track just an ordinary pop commodity. Grande says “I like women and men” — a declaration that seems to contextualize her confusing relationship with queerness.

Recently, many have accused Grande of queer-baiting and some have construed her admission on “MONOPOLY” as another offence. There is plenty of merit to these claims. Grande’s music video for “break up with your girlfriend, i’m bored,” in which the singer flirts with a man before kissing his girlfriend, gave off serious and uncomfortable Katy Perry “I Kissed a Girl” vibes. And Grande’s choice to headline Manchester Pride as a cis and (apparently) straight artist provoked understandable backlash.

Still, at some point, otherwise justifiable scrutiny of queer signaling by a commercial musician becomes dangerous. The backlash against “Monopoly” nears that point. In the aftermath of the single, much online criticism of Grande has, deliberately or not, recycled misconceptions too often used to discredit bisexual people. One tweet cited by PinkNews compared Grande to the trope of straight women “kissing for fun” — a belittling stereotype many bi women must overcome. Another referenced the common misunderstanding that because Grande hasn’t dated another woman, she can’t truly be bi.

If Grande’s insinuations of her sexuality turn out to be insincere, there will be plenty of reason to be shocked and hurt. But for now, let’s try to accept Grande’s self-definition, lest our well-intentioned skepticism fall into the tired tropes of bi erasure. And let’s not forget to enjoy the infectious and uplifting sounds of “MONOPOLY” while we’re at it.