From Cannes: ‘Il Traditore’ (‘The Traitor’) Is A Mesmerizing Story of Betrayal — Until It's Not 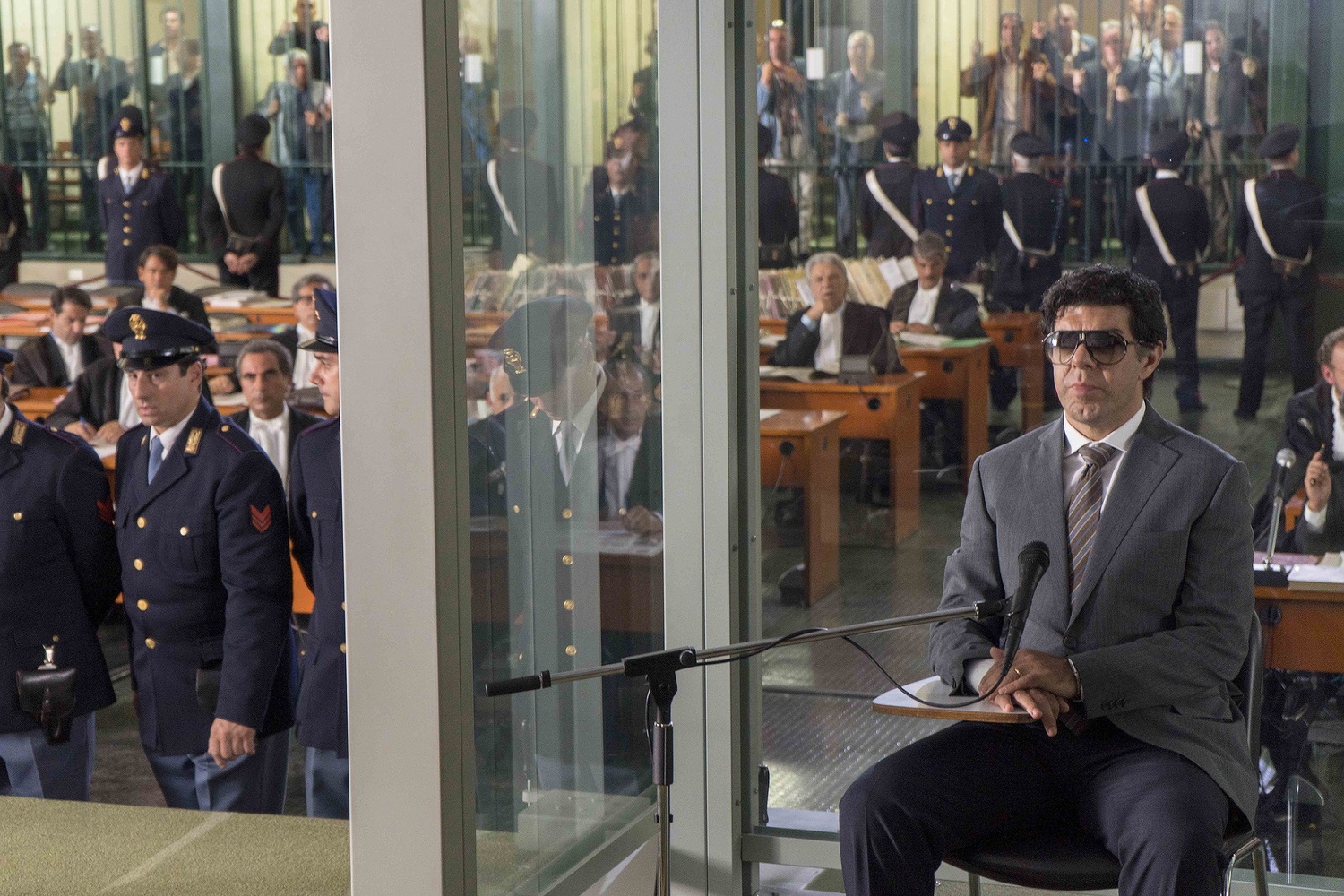 On the eve of the secret departure of Italian mafia boss Tommaso Buscetta (Pierfrancesco Favino), he tells his long-time friend and fellow mafia member Giuseppe “Pippo” Calò (Fabrizio Ferracane) to look after his sons. He departs for Brazil, hoping to start a peaceful life with his new wife Cristina (Maria Fernanda Cândido). So begins Marco Bellocchio’s “Il Traditore” (“The Traitor”), a look into the life of one of the first informants from the Italian mafia who helped indict hundreds of mafia members. Grounded in the Maxi Trial of 1986, the largest anti-mafia trial in history, Bellocchio strays from some historical details, creating an at first enrapturing but ultimately superficial and overextended look into Buscetta’s experiences.

Things back in Italy go awry for Buscetta when he receives news of numerous deaths of his former colleagues and — more upsettingly — his sons, and is unable to reach Pippo. Bellocchio cuts to scenes of the murders, with a ticking bodycount on the bottom corner of the screen. The Brazilian state police soon catch Buscetta and he’s taken to prison, where he’s tortured for information and eventually handed back to the Italian government. In a crucial turn in history, Buscetta becomes one of the first prominent figures in the mafia to turn informant, giving the state vital and secretive information about his group, Cosa Nostra, which literally translates to “Our Thing” in English (as Busetta explains, that’s what all the members call it, because “The Mafia doesn’t exist. It’s an invention of the press”).

As Buscetta stays imprisoned in Italy, he’s questioned by Judge Giovanni Falcone (Russo Alesi), whom he slowly grows to trust. This delicate yet vital relationship plays an enthralling part in the Maxi Trials, one that Bellocchio disappointingly spends little time exploring. Favino delivers a charismatic and captivating performance as Buscetta throughout the film. From his anguish at the loss of his sons to his fury at those who betrayed him, from his lustful passion for Cristina to his seemingly indifferent resignation in becoming an informant, Favino convincingly commands an intense range of emotions. And when he utters unflinchingly, “I’m not scared of dying, I’m not scared of anything,” it really seems as if he isn’t. His one wish? “To die in my bed.”

Favino’s engaging acting, however, is not enough to create an in-depth look into Buscetta’s character. Bellochio, deftly aware of the political webs he’s playing with through this story, observes most of the other figures from a safe distance. Bellochio vacillates between showing two sides of Buscetta: a womanizing old-time sly mafia member mainly cooperating because he’s left with no choice, and a deeply loyal but vengeful father seeking revenge against those who killed his friends and family. In this way, the audience knows Buscetta is a complicated character, yet Bellochio never gives genuine insight into Buscetta’s exact incentives for supposedly betraying Cosa Nostra.

In one of the best rapid-fire dialogue exchanges at Cannesusi, Buscetta and Calo ruthlessly chew each other out in a cross-examination. The dramatic score of string instruments (Nicola Piovani compiles an excellent soundtrack) gives the scene an operatic effect, and complete with the mafia mobsters in cages around the courthouse and disorder everywhere, Bellocchio creates a scene resembling a zoo more than it does a courthouse, and a hilarious one at that. Cross-examination aside, Favino carries on most of the court scenes with a deadpan expression that conceals his thoughts. Though successful at maintaining a composed presence — a performance that contrasts with Luigi Lo Cascio’s portrayal of Busetta’s old ally, the comically engaging Totuccio Contorno, who fervently talks back to the caged mobsters in the courthouse — Bellocchio’s portrayal here again deprives viewers of understanding Buscetta’s motivations for giving testimonies to the state, and whether he foresaw the eventual impact it would have on Cosa Nostra. As enticing as the court scenes are, after a few rounds, Bellocchio gets bogged down in the technicalities of the legal procedures and they start to lose their fresh appeal and comic edge. Again, the time would’ve better spent developing dialogue between Falcone and Buscetta, who takes a backseat as soon as the trial begins, only to never appear again in the film except for a brief farewell scene when Buscetta leaves Italy for the United States under the Witness Protection Program.

Perhaps Bellocchio attempts to stay true to the machismo espoused in the Cosa Nostra circles, but his dismissal of female characters in the film is disappointing. Even Francis Ford Coppoola gave more agency to he female characters in “The Godfather” (which was released over 40 years ago), and with this year’s festival so heavily publicizing equal representation, Bellochio seems to be clueless of (or indifferent to) the cultural movement. The women — sisters, wives, especially Cristina — are seen mostly as sexual objects, as Bellocchio shows a phone call where Cristina masturbates over the phone to a saudade Buscetta, who’s in jail, as one of the determining factors for Buscetta’s decision to become an informant. Even Buscetta’s sincere declaration that families are “untouchables” to Cosa Nostra is reductive: Just as much as women are protected, they’re also prevented from having any agency or control in family matters, only seen as powerless victims and pawns in the game left to deal with the dire consequences of the men’s actions.

Unfortunately, the film goes about 40 minutes too long. Where a natural ending point to the film could’ve been, Bellocchio takes us back into Buscetta’s life, for reasons unclear, as the film recounts historical events in his life without revealing what his earlier incentives were. If anything, Buscetta becomes a more muddled character in result. Even though Bellocchio romanticizes the old Cosa Nostra and Buscetta’s honor to it, “Il Traditore” is a mesmerizing story of crime and betrayal and amusing court scenes — until it’s not.