In the spring of 1992, a report issued by conflict resolution experts at Harvard Law School revealed that there was a pressing need to improve race relations at the University.
By Grace A. Greason 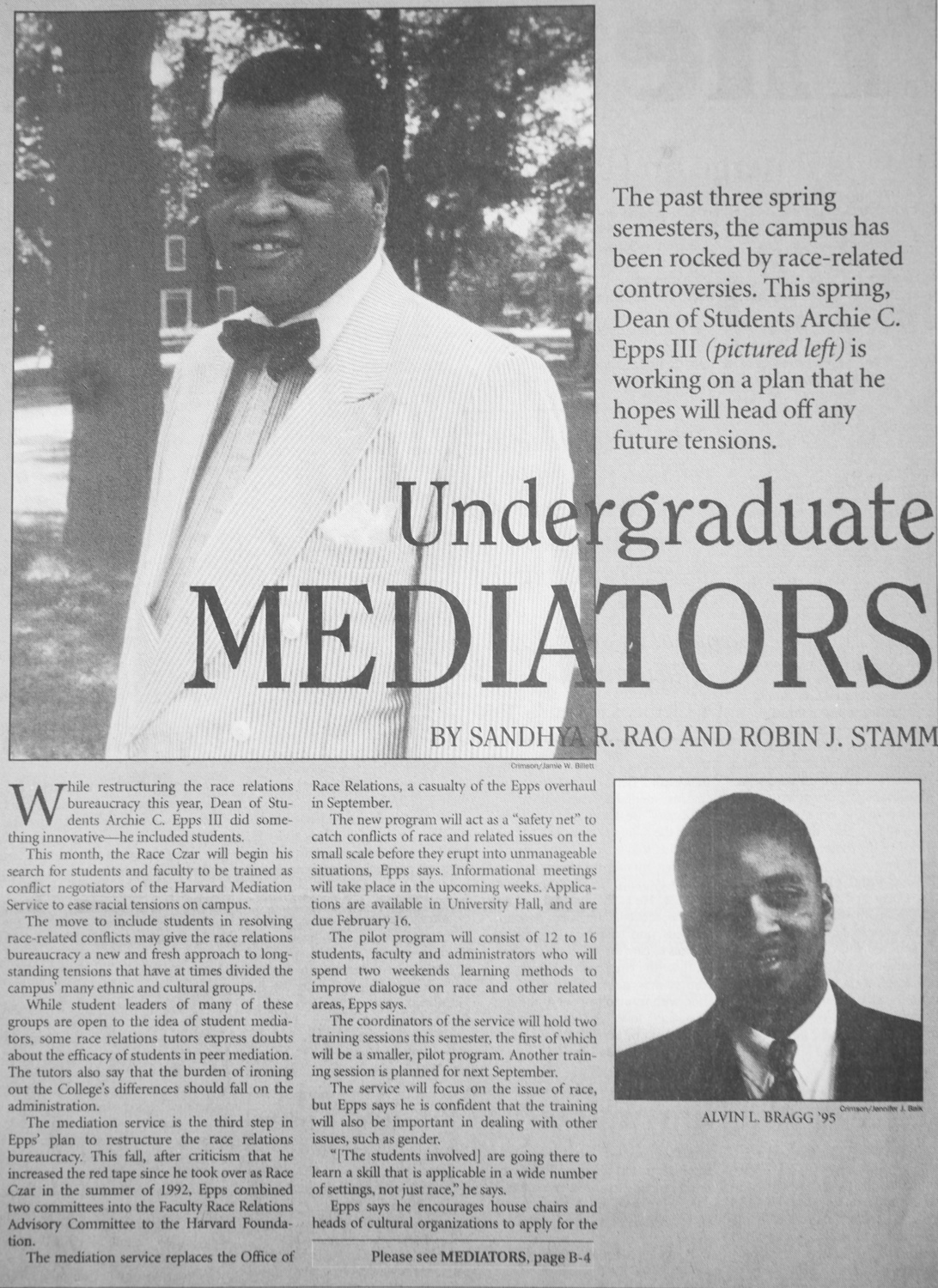 When racial tensions came to a head in 1994, Harvard introduced race mediators among students and faculty. By Courtesy of The Harvard Crimson Archives

In the spring of 1992, a report issued by conflict resolution experts at Harvard Law School revealed that there was a pressing need to improve race relations at the University.

“The principal findings show that we do not know at this college how to discuss race,” Dean of Students Archie C. Epps III said of the report’s findings.

The next academic year brought forth a series of changes in October 1993. Epps reshuffled the College’s race policy making committees and spearheaded the Harvard Mediation Service — a student and faculty led program that would offer conflict resolution sessions on racial issues.

The Mediation Service — in addition to Epps’ other initiatives — took hold at Harvard at a time when students scrutinized the University for controversial arrests and exclusionary practices.

In April 1992, the Black Students Association distributed a flyer across campus titled “On the Harvard Plantation” which detailed four allegations of police harassment and racial profiling of black students. In a separate charge in March 1993, Asian American students planned their third successive Junior Parents’ Weekend protest against the omission of minority students on panels about life at the College.

In announcing the inception of the Mediation Service, Epps — one of the first black administrators at Harvard — said University affiliates lacked the resources to resolve identity-based conflict.

"We tend to debate issues rather than exchange views,” Epps said.

Through the Mediation Service, Epps — who served as dean until 1999 and died in 2003 — said he was hopeful students themselves could help alleviate race-related tensions on campus.

“Undergraduates can be extraordinary,” Epps told the Crimson in 1994. “Adults often tend to be stuck in their old ways.”

The program, which would be led by students and faculty, would be application-based and provide training on conflict resolution to those selected. Fifteen of the selected students would undergo additional training to become certified to mediate disputes specifically about race and train members of campus organization on these skills.

In its inaugural year, 40 Harvard affiliates applied for the program and 18 were ultimately selected as mediators. The team consisted of students, tutors, and faculty — a mix that many praised.

In a February 1994 interview, then-Winthrop House tutor Naomi André said the program would have been useful during a 1991 controversy in which a Kirkland House student hung a Confederate flag outside her window.

“It would have been helpful to have people trained in resolution,” André said.

Yet others doubted the capabilities of students to mediate conflict without bias such as Angela A. Gonzales, a tutor in Kirkland House at the time.

“In say, a conflict between the [Asian American Association] and the BSA, the members of the BSA might not want an Asian-American mediator," Gonzales said in a February 1994 interview.

“It's almost as if we are shifting the responsibility away from ourselves,” she added.

Shortly after Epps announced the program, the Crimson Editorial Board published a staff editorial recommending that student mediators be limited to advisory roles.

“The actual mediation of disputes should be carried out by professionals, whose competence and fairness is not in doubt,” the Board wrote.

Amidst this criticism, and after months of training – which included games, case studies, and simulations – the Mediation Service opened in the basement of Holworthy Hall in October 1994.

Struggling Too Make An Impact

Then-AAA co-President Joan R. Cheng ’95 said in February 1994 she was eager to apply to be a mediator.

Yet, in an interview last week, Cheng said there was little demand for the service throughout her time with the program, and that she personally did not mediate any conflicts.

“While all of us participants appreciated the service and it was helpful to us personally, we weren’t able to [use] those skills in service to the larger student body,” Cheng said. “I think it was launched with good intentions, but I don’t know that students were fully aware of it as a service.”

Then-BSA President Alvin L. Bragg Jr. ’95 said in an interview last week he approved of the program, but said he could not recall any interaction with the Mediation Service. Bragg said he did not think it significantly improved issues facing students of color such as racial profiling despite its intentions to improve police relations, among other things.

“My general sense is that the school’s reactions were episodic and reactive,” Bragg said. “I don’t remember any sustained push to improve, or even understand the policing issues.”

A year after its launch, the program began offering two-hour conflict resolution workshops to students and faculty in attempts to publicize its services. The Mediation Service also considered expanding its sessions to issues beyond race and linking its resources to each House.

Ultimately, the Mediation Service folded sometime after 1996, though it is not clear exactly when.

Douglas Stone — a first-year proctor and associate director of the Harvard Negotiations Project at the Law School — had been involved with selecting mediators for the service. In an interview last week, he said the program had some success even though it did not last.

“I think the biggest success was bringing some awareness of the issues to the school, but also training groups of faculty and students and administrators,” Stone said. “They didn’t end up using the skills a lot in their direct application, but they disseminated those skills.”

Years after the dissolution of the Mediation Service, several newer initiatives on campus emerged to provide students with guidance on race-related issues.

Indigo, a peer-counseling program for mental health issues related to race or class, launched in spring 2016. Around this same time, the College developed the Diversity Peer Educators, a program that pays students to lead trainings and host events that promote inclusion at Harvard.

Incoming first-years are also assigned to read personal narratives related to identity and diversity and discuss the texts with members of their entryways during Opening Days.

Cheng said that the conflict mediation skills that she learned could help students in their personal and professional lives and make a useful supplement to these campus orientation activities. But solving peer-to-peer conflicts is not something best left to students, she said.

“I think that having just students without actual administration involvement is a little too hands-off,” Cheng said. “It sends the wrong message. It says ‘this is a problem that you guys should handle yourselves,’ rather than ‘we are going to get involved directly,’ and I think that’s where the [Meditation Service] failing might have come about.”

—Staff writer Grace A. Greason can be reached at grace.greason@thecrimson.com.