From Boston Calling 2019: The ‘Weird Beauty’ of Christine and The Queens 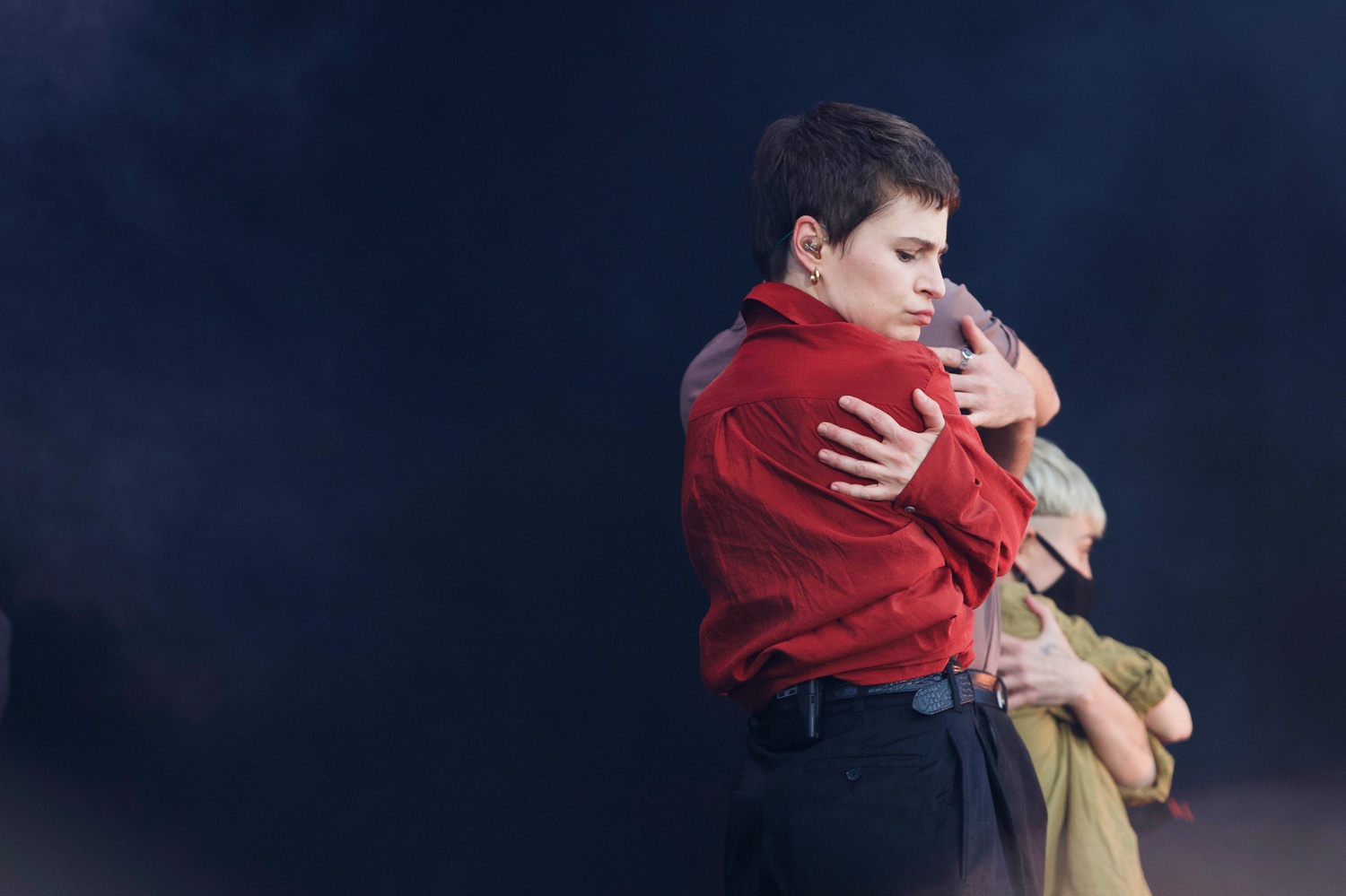 A blank stage offers limitless possibilities. The vast majority of acts opt for spectacles, for flashy visuals, lights or lasers, and screeching instrumentation and vocals to catch the attention of an amorphous festival crowd. Fortunately, Christine and the Queens is not like the vast majority of festival acts. The French pop artist’s intimately choreographed performance, strengthened by gentle banter and celestial vocals, created a different kind of spectacle. Trading stunts for close physical touch, trust, and love, Christine and the Queens blurred the line between spectator and participant to build — in Chris's own words — a “small utopia” on Boston Calling’s Green Stage.

With an opening crescendo of synthesizers and subsequent gasp of the track “Comme si,” Chris (Héloïse Adelaide Letissier) and a group of dancers burst onstage in effortless coordination. “Backup dancers” isn’t an adequate description of the performers, whose movement proved integral to each beat of the set. With choreography reminiscent of the Viewpoints theatrical technique, Chris and her dancers shifted from careful contact to group dance and call-and-response movement, serving alternately as audience and performer for one another. Passing back and forth from stage right to left and back again, each individual paused to grasp another’s wrist, waist, head, or neck — the trust between bodies palpable as they explored the positive and negative space created by their constant movement. Crooning “‘Cause when you play me loud baby / We are making love / Now play me once again and let go” with her eyes trained on the audience, Chris wordlessly invited the growing crowd to join in the revelry.

While movement saturated the performance, Chris used the breaks between songs to create intimacy. “We need to reinvent everything,” she said, having just invited the audience to call her “Chris.” The connection between name as a representation of the self and reinvention is of great significance to the artist, who went through an intense period of personal exploration to construct and sink into the identity of “Chris.” In an interview with The New York Times, she referred to the identity she puts forth in her second album — aptly titled “Chris” — as “horny, hungry, and ambitious.” Onstage, Chris embodies and exudes all three traits, singing about sex, desire, and power. “I rule / Over all my dead impersonations / ‘Cause I’ve got it / I’m a man now,” she sang on “iT,” commanding masculinity and the power that comes with over a pulsing beat. In presenting gender and identity as constructs to be unapologetically experimented with, Chris offered a welcome counter-energy to a festival headlined — for the third year in a row — entirely by men. It is not uncommon for artists to preach self-acceptance during their sets, but few come across as genuine as Chris does. “There is no judgement here, there is is only love,” she said, and it was clear that this instruction was to be taken seriously. There would be no exceptions, no choice but to be oneself.

The singer’s movement and message collided in one striking performance after another. Blue smoke flooded the stage for the number “Tilted,” reducing the view of Chris and her dancers to that of silhouettes in a thick haze, guided only by the playful lilt of the chorus: “I’m actually good / Can’t help it if we’re tilted.” A brief ode to the joy of being “out” introduced the song, and the proudly queer artist couldn’t help but quip after her own chorus, “Aren’t we all?” A single dancer joined her for the song “Goya Soda,” during which the two repeatedly embraced and broke apart within a teal cloud of smoke. Chris’s voice wrapped itself around each verse and chorus, ranging from a clear belt to a soft, pseudo-rap and an airy falsetto. It’s ache stretched out over the consistently throbbing beat of each song, dictating the mood but refusing to sacrifice danceability in the process.

Chris herself, in all her whimsical kindness and charm, remained the focal point of the show. Whether in the thick of a dance or alone, facing away from the crowd and writhing along to the music, she could not be lost. Toward the end of her set, she paused to share an anecdote about a young man she witnessed being bullied for his “weird beauty” on the streets of Paris. “I do believe in weird beauty because it opens doors,” she said. “Fuck the norm!” She then climbed aboard the stage’s scaffolding to perform “Saint Claude,” ascending toward the rafters to serenade the man for whom she had not intervened. She held her red, button-down shirt out in front of her like an offering — taking the shirt off her back for the man and for all the people swaying below her. “We are so lonely / In this part of town,” she sang, her voice ringing out clear like a battle cry. As the scaffolding descended, she waved her shirt above her head like a surrender and slipped back onto the stage.

“My shrink says it is healthy to let it go,” Chris said before diving into her final number “Intranquillité.” Equal parts eccentric and elegant, euphoric and composed, Christine and the Queens let loose its “weird beauty” onstage, and Boston Calling was better for it.