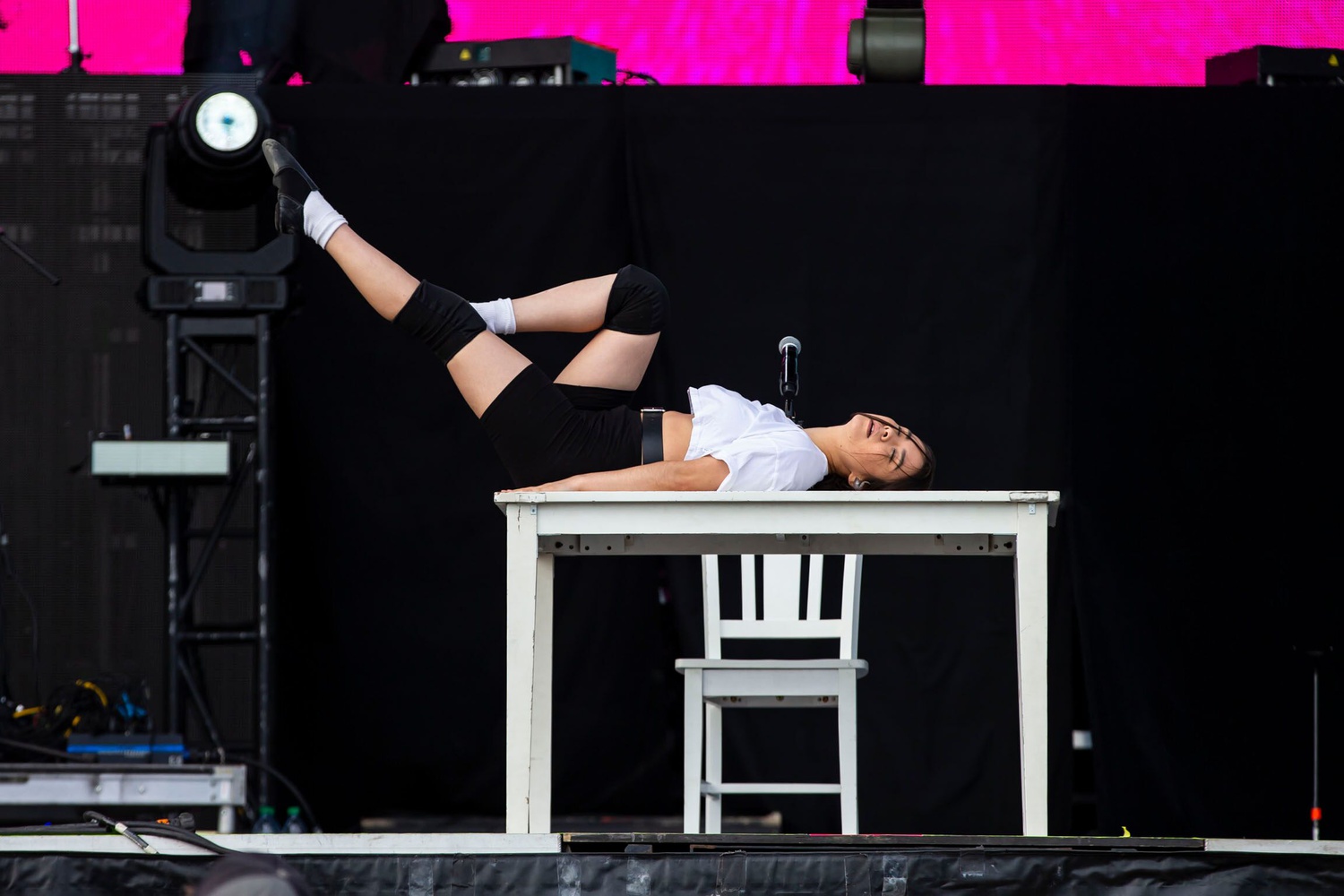 Mitski is not for everybody, but she should be. The prolific indie-rocker took the Green Stage at Boston Calling Saturday afternoon to give one of the most unique performances of the weekend. Meticulously choreographed and experimental, Mitski’s live performances are experiential, closer to theatrical productions than they are to standard concert sets. Each movement of her arms, legs, torso — even her eyebrows — is tailored to the performance, constructing an elaborate fourth wall between performer and spectator. At Boston Calling, Mitski broke this fourth wall just a few times, letting the beauty of her music and performance art speak for itself.

Mitski strode on stage to the sound of fanatic screaming from a crowd decidedly younger than the previous day’s, lunging into an active rendition of “Goodbye, My Danish Sweetheart.” Taking a half-skip, half-step forward with each beat of the song, she paced back and forth across the stage — her simple clothes, black knee pads, and jazz shoes a testament to the physical endurance her set demands. On a plain white chair and table set center stage, Mitski laid to perform “Why Didn’t You Stop Me?” She thrust her legs into the air, circling them around one another in vertical bicycle wheels in time with the song’s whining synths. Only after a soft performance of “Old Friend” did she pause to introduce herself. “It’s so good to be here. I don’t know you, but I’m so full of love for you. Thank you for being here,” she said, perched on the table. “I just wanted to break the fourth wall a little bit to say hi, but now I’m going back.” She then proceeded to stretch her legs out into a half side plank, holding her body rigid as she sang with aching precision over the throbbing baseline of “Francis Forever.”

Considering the close attention paid to her movement, one might be led to wonder if Mitski can control each individual vocal cord as well. Whether side-planking, strutting, writhing, or jumping up and down, her voice remained consistent — floating effortlessly between her belt and head voices. At one point during the song “I Will” she rolled onto the table and sang upside down, her head rolled over the table’s edge and eyes trained toward the audience, but without making eye contact. The subtleties of her expressions were difficult to catch from a distance, but could be seen projected upon the stage’s video displays. Emotions of desire, sadness, anger, and panic flit across her face in time with the music. A look of fierce determination accompanied her flexing of her bicep during “I Don’t Smoke,” coinciding with the lines “You can lean on my arm / As you break my heart” to heart-wrenching effect. She performed a slowed-down version of already mellow “First Love/Late Spring,” giving the melodic tune a more anxious tone by pacing, panicked across the stage while reciting the lines “One word from you and I would / Jump off of this ledge I’m on, baby / Tell me ‘don’t,’ so I can crawl back in.” She projected fear and desperation rather than longing, emphasized by the careful movement of her body and strain of her voice.

The level of control that Mitski exercised over every single component of her performance — from the choreography to the music and the vibrant, pulsing projections behind her — made it all the more striking when she began to let loose. In a bout of constructed frustration during “Geyser,” she pushed up the table that had supported her the entire show thus far and began furiously trying to push it over, ultimately failing and collapsing to the floor. When the opening chords to “Townie” rang out, her carefully coordinated and repetitive arm movements and shakes of the head went out the window, replaced by headbanging, jumping, and shaking across the stage. The ode to reckless empowerment is best wailed, which Mitski did to perfection. “And I’ve tried sharing and I’ve tried caring / And I’ve tried putting out / But the boys, boys, boys keep coming on / For more, more, more,” she howled, crescendoing more and more on each repeated word. Screams rang out from the crowd when she punctuated the final line of the song — ”I wanna be what my body wants me to be” — by slapping her own ass.

It is impossible to describe each and every song that Mitski performed, and yet each is so expertly staged that they all merit attention. It is hard to put into words the intricacy and intimacy she achieved even in the distant atmosphere of a festival stage. After singing “Nobody,” Mitski welcomed those seeking to see other festival acts to leave. “I’ve played the hit,” she said, apologizing to those previously unfamiliar with her music. “This is the vibe, this is it.” This is true, but her performance is far more than a “vibe.” It is elaborate, meticulous, evocative, and expertly conducted. There are no weak Mitski songs, and certainly no weak performances. Her set is not the product of choreography, vocals, props, or visual effects, nor of a singular guitar or a synthesizer, it is their seamless combination. It is her, fully, and it is beautiful.