Summer Postcard: From a Parking Lot 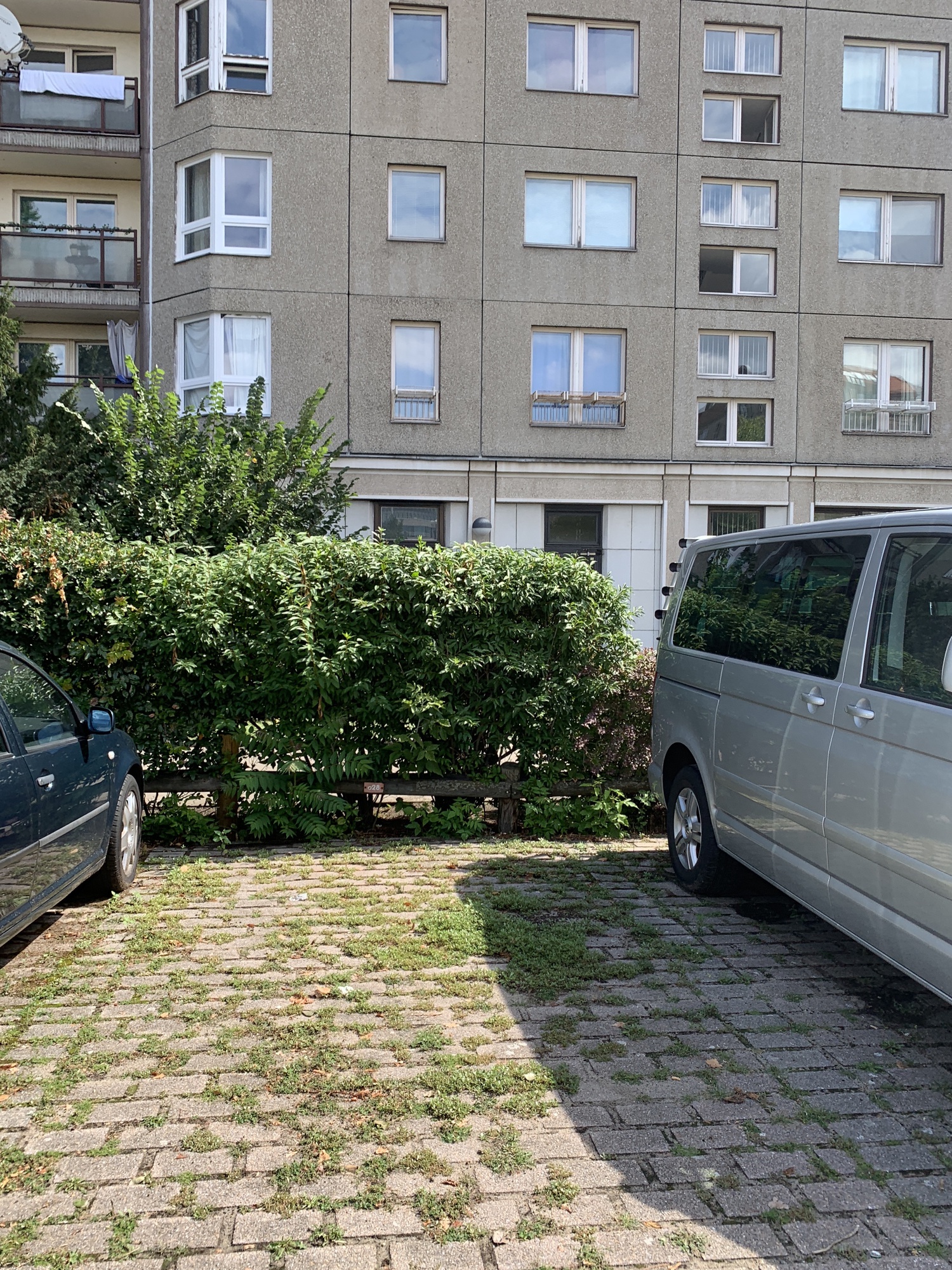 BERLIN, GERMANY — After a 15 minute walk westward from the Memorial to the Murdered Jews of Europe, our walking tour of Berlin comes to a halt in a parking lot. 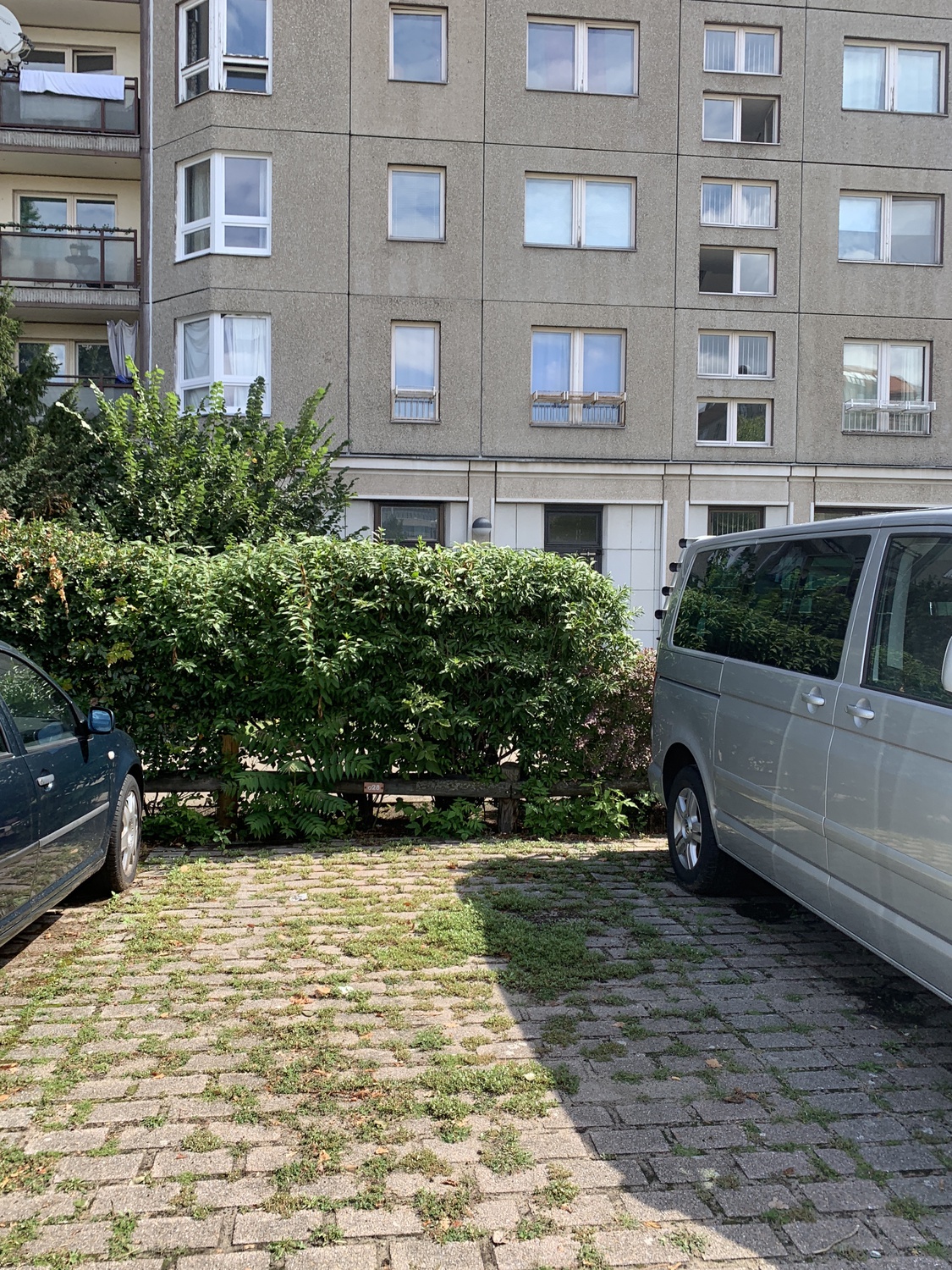 The guide pauses, and the crowd murmurs in confusion. I look up at the apartment complex around us. The buildings are brick, grey, unmemorable. Why have we stopped here? What could possibly be remarkable about this unremarkable place?

Beneath our feet, the tour guide informs us, lies the remains of the Führerbunker — the bunker that served as Hitler’s final headquarters during WWII. Buried under the concrete lies an intricate network of of rooms and passageways that were occupied by top officials in the Nazi party. It is from here that Hitler detailed his plan for The “Final Solution.” All this dark history rests beneath our feet, under this parking lot, in this forgettable place.

One tour company has put up their own sign explaining the significance of the location, but beyond that there are no plaques to indicate that this lot was once the epicenter of power in the Nazi regime. It is difficult to fathom the temple of evil that collects dust, meters below.

A tourist asks the guide if we can take a tour. “No,” she shakes her head — no one is allowed down there. In the aftermath of WWII, the German government made the express decision not to memorialize this place in any way; they wanted to discourage Nazi sympathizers from using it as a place to gather. While six million Jews are remembered at an expansive, open-air memorial just a kilometer down the street, Hitler’s bunker is closed to the public. His material legacy has been condemned to decay in anonymity.

The tourists resume their chatter and the guide leads us out of the parking lot, but as the others move forward, I hang back. I look closely at the apartment buildings around me, at the family SUVs scattered across the lot, and at the cursed ground beneath my feet. Without dissecting the impulse, I feel compelled to take a few photos while the others walk away. Something makes me feel intensely uneasy about this place.

It is not the weight of the history that makes me uncomfortable. I am not disturbed by the knowledge of what’s buried underground, but rather what exists above it. I am bothered by the green of the grass by the sidewalk and the Direct TV dish propped up on a balcony. I am unnerved by how easy it is for pedestrians to walk or jog by — for Berlin to move on.

I appreciate the German government’s refusal to memorialize the Führerbunker in any way. For a man who dreamed of global influence, burying Hitler’s home under a nondescript parking lot is perhaps a fitting punishment. However, while I do not think we should give the Nazis a privileged place in our collective memory, I also do not think it is wise to have the general public forget what is beneath the ground, beneath this time.

#NeverForget is the mantra of Holocaust surviors and Jews around the world who vow to never forget the atrocities of genocide. Yet, just 74 years after the end of WWII, people are beginning to forget. A recent survey of Americans found that 41 percent do not know about Auschwitz, the death camp in which 1.1 million Jewish lives were snuffed out. Another study found that for German school children aged 14 to 16, less than half know about the camp.

It gives me comfort that my memory of the trip to the Führerbunker will be preserved in this article, because I fear forgetting. I do not want to forget the place I saw that Saturday afternoon as easily as I forgot what I had for breakfast that morning.

In this moment, just a week after my Opa died from a stroke, the imperative to remember is stronger than ever. When my grandfather was alive, so were his memories of what it was like to flee Nazi Germany at the age of 10. He would not forget that fateful Easter morning when the Nazi’s stormed his home and burned his possessions. My Opa would not forget having a gun pointed to his head, just as he would never forget the day his own grandfather was beaten to death by a Nazi officer.

But he is gone now, and he is not here to keep these memories alive unless others take up the burden for him. Nearly a century after the end of WWII, few refugees and survivors remain to tell their stories. The thought of these memories dissipating fills me with dread, as does the seeming innocence of this parking lot.

I resolve to not forget.

The question, of course, is how to remember the past without becoming stuck in the mire of history. This is a daunting issue to navigate, and I do not presume to propose an answer here. But what I do know is this: If we forget the past in an attempt to move forward, we will begin to see ourselves move back.