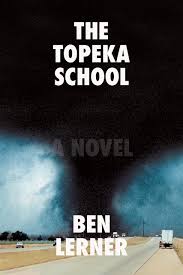 In “Self Portrait in a Convex Mirror,” John Ashbery ‘49 stands in a gallery in Vienna and contemplates the self, both as it appears in a painting by Parmigiano and in his own poetry. Looking at the distorted image, what he finds is something shifting that lapses “Like a wave breaking on a rock, giving up / Its shape in a gesture which expresses that shape.”

In Ben Lerner’s novel, “The Topeka School,” protagonist Adam Gordon finds himself thrown into a similar state of existential flux in a less likely location: a high school debate tournament. Wearing an ill-fitting suit and his father’s tie, Adam lapses into a glossolalic fit, his speech propelling itself forward, “stretched by speed and intensity until he felt its referential meaning dissolve into pure form.” This ordinary, uncanny moment is characteristic of Lerner’s novel and his kaleidoscopic and often brilliant inquiry into the power of language in American society.

With five books of slippery and ruminative fiction and poetry under his belt, Ben Lerner has established himself as an emerging postmodern writer. His first novel, “Leaving the Atocha Station,” documents the struggle for artistic authenticity of a young poet who, like Lerner, graduated from Brown and travels to Madrid on a writing fellowship. His second, “10:04,” wrestles with the ethics of creation and procreation under late capitalism through a character who, also like Lerner, is a Brooklyn novelist dealing with the surprise success of his first book. What unites these novels with Lerner’s poetry is a distinctive voice: one ironically detached from the possibility of genuine expression, yet also skeptical of its own scepticism, yearning for a collective lyric.

In some ways, “The Topeka School” is Lerner’s most conventional work. Yet in others, it pushes his struggle with authentic expression further than ever before. Unlike “Atocha” and “10:04,” “The Topeka School” has a plot that approaches normality. Written in the voices of Ivy-bound high school senior Adam Gordon and his psychologist parents, the novel traces Adam’s struggle with the “vacuum at the heart of privilege” that drains the life of upper-middle class white teenagers in 1990s Topeka, Kansas. Slipping into the spaces between the novel’s chapters is a fourth voice, that of Darren Eberhardt, an unintelligent and bigoted teen who serves as a foil to popular, smart, debate-champion Adam. A mysterious act of violence by Darren hovers over the book, a reminder of his status as what Lerner terms the “perverted form of the empire’s privileged subject.”

Lerner himself was a high school debate champion from Topeka, Kansas — an experience he described in a Harper’s essay that anticipates many of the themes of his novel. But while “The Topeka School” may be autofiction, it is not autobiography. On the contrary, the novel is full of instances where language fails to represent reality, where it falls silent or swells with disturbing power, dragging content behind its form. As a child, Adam gets a concussion that leaves him unable to recall simple words; as a teenager, he suffers migraines that return him to this prelinguistic state. In the book’s most disturbing sections, Adam’s identity is twisted by the discursive patterns of toxic masculinity and political doublespeak. But in more encouraging moments, he finds in this same power the beginnings of his passion for poetry.

For Lerner, the ability of linguistic convention to switch places with meaning is deeply concerning. In his Harper’s piece, he decries an “impoverished political discourse” that serves “to naturalize our particular cultural insanity.” This is a concern he shares with the L=A=N=G=U=A=G=E poets of the 60s and 70s, who rejected language’s expressive potential, treating it instead as a sculptural object to be reshaped toward liberatory politics. But Lerner sees an opportunity in this fragmentary language. In the final scene of the novel, an adult Adam takes his kids to an anti-ICE protest that features a “human microphone,” a tactic in which activists chant the words of a speaker to avoid using a permit-requiring PA system. Though embarrassed to be shouting in public, Adam feels the power of this “tiny public speaking, a public learning slowly how to speak again, in the middle of the spread.”

Parts of Lerner’s novel may chafe readers. When he constructs a chapter around a Herman Hesse short story, some may find Lerner pretentious; and when he attacks Donald Trump and toxic masculinity, some may find him too topical, too current. But the strength of Lerner’s novel is the way it undertakes a task it acknowledges to be impossible: the salvage of a Whitmanesque “we” from our polluted national language. Lerner’s character pondered this challenge in “10:04,” but “The Topeka School” is his first prose work to make an attempt to overcome it. Like John Ashbery, Lerner is peering through the convex mirror of our discourse, but still writing — writing towards a truer language on its other side.