An eventful last five minutes, in which each team notched its only goal of the night, brought the game to overtime. But extra hockey could not provide a more conclusive result.
By Spencer R. Morris 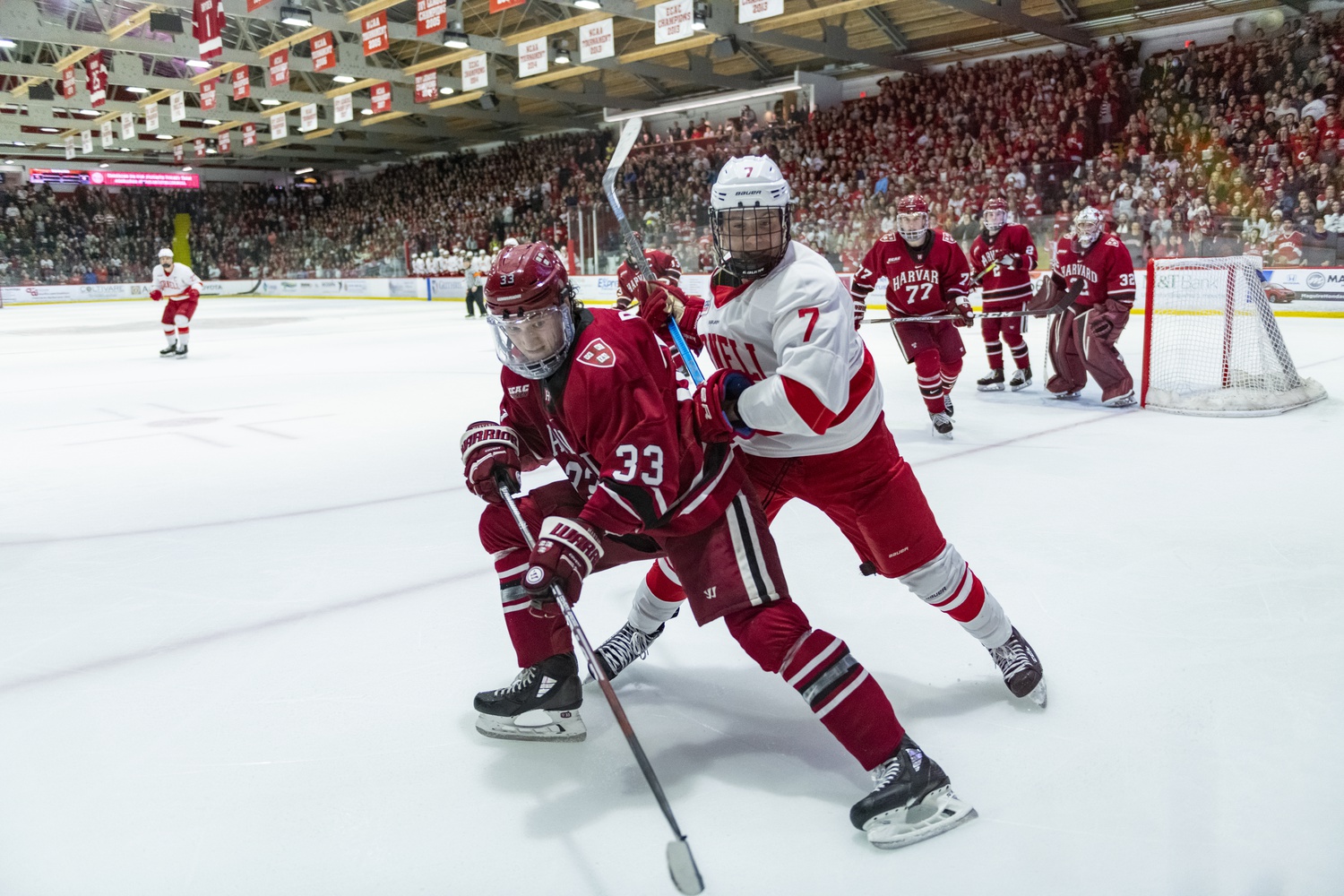 The latest clash between Harvard and Cornell ended in stalemate, despite a late go-ahead goal from Crimson sophomore Jack Drury. By Courtesy of Eldon Lindsay/Cornell Athletics

ITHACA, N.Y. — On Saturday night, players, coaches, and fans alike packed the infamous Lynah Rink for the next installment of the storied rivalry between the No. 16 Harvard men’s hockey team and No. 1 Cornell. Yet, despite the game delivering on the drama characteristic of a Crimson-Big Red showdown, nobody left satisfied.

“[The tie is] just frustrating. Excellent team we’re playing against,” Crimson coach Ted Donato ’91 started. “I thought we played well. I thought we really defended well. We get the lead, we’re working hard, we’re limiting chances for them and creating some stuff for us.”

The storied rivals retook the ice for the third period having skated to a goalless stalemate through 40 minutes. In the middle frame, Harvard carried play for minutes at a time, showing the first signs of one team tilting the ice slightly in its favor. The Crimson’s 12-4 advantage in second-period shots indicated as much.

Nonetheless, the most relevant ledger of all — the scoreboard — reflected a tie, demanding that the third stanza determine a victor. And just when it appeared as though a winner had emerged, Cornell re-wrote the script.

Trailing by a score, the Big Red pulled junior goaltender Matthew Galajda with over two minutes remaining in the matchup, gaining an extra skater in his stead. A crucial offensive-zone penalty from Harvard sophomore Jack Drury enabled a 6-on-4 for the home team, and just 10 seconds into the powerplay, sophomore forward Michael Regush potted the game-tying goal in close.

“We take an offensive-zone penalty, and it ends up being the difference between a huge win for us and a tie,” coach Donato said. “As a group, we took a big step forward for us. Coming [to Lynah Rink], it allows you to have a chance to grow as a group and come together in this environment against an excellent team.”

Regush’s eighth of the season came after the Crimson failed to seal victory on several empty-net-goal opportunities.

“That’s what I talked about after the game,” coach Donato began. “I said, ‘Listen, guys, we had two full possessions with an empty net, and we took an offensive-zone penalty that put us down.’ There’s no moral victories, and we just have to keep improving.”

The tally also equalized a late-third-period Harvard goal from none other than Drury. With four minutes left on the game clock, sophomore forward Casey Dornbach strode with the puck down the right side of the Crimson’s offensive zone.

He carried it behind the net and threw it into the slot, where Drury had broken free from a defender. The centerman found twine on the ensuing one-timer, which was upheld after Cornell coach Mike Schafer petitioned the officials for a goaltender interference review.

So, after 56 hard-fought, well-played minutes by Harvard, the visitors finally had something to show for the effort. Regush’s spoiler two minutes later restored the gridlock and in doing so resurrected the Lynah crowd, which had fallen silent after Drury’s late go-ahead snipe.

After the game, Drury, who was involved in the highest and lowest points of his team’s performance, bore the burden of the 1-1 draw — disappointing only because his squad was otherwise primed to take down the nation’s top squad in a notoriously hostile barn.

“It’s disappointing,” said Drury of his late-game penalty. “At the end of the day, I can’t be doing that. It was tough. I feel awful.”

Teammates were not as hard on Drury as he was on himself.

“He’s the most angry guy in the entire room right now for that,” said junior blue-liner Reilly Walsh of Drury. “He’s been the best player on our team for just about this whole season. He’s first [penalty kill], first [powerplay], basically one of our captains this year. You can just see when he plays, he’s the hardest-working guy. And he scored the goal for us…. We wouldn’t have been in that game if it wasn’t for him.”

Considering the unfriendly crowd and formidable opponent, the Crimson’s execution of a solid gameplan was laudable. The Harvard icemen outshot the hosts to the tune of 30-17, controlling possession and playing in the Big Red’s zone for notable stretches on Saturday. These are not easy feats considering Cornell’s size, speed, and forechecking prowess.

“The game in Boston, [Cornell] came out and put us under pressure early on their forecheck,” coach Donato recalled. “As the game wore on in Boston, after they kind of knocked us off-balance a little bit, we played pretty well the second half of the game. But against a team like this…you’re going to have a tough time climbing uphill.”

When the two rivals met in early December, the Big Red overwhelmed the Crimson in the first period with these very strengths. Harvard was determined to prevent Cornell from dominating to such a degree, and to its credit, if anything the visitors carried the play at Lynah.

“Shots probably told the story of the game,” Walsh said. “When it was 5-on-5, they didn’t stand a chance. I thought we did extremely well with their forecheck…. It’s very hard to get points out of Cornell, and we haven’t gotten any points here in my three years. This is our first time. But obviously the tie isn’t what you look for.”

Galajda (1 GA, .967 SV%) was unwavering for almost the entirety of the contest, and while the Big Red’s scoring attempts were more limited — courtesy of timely blocked shots, skilled stick checks, and savvy positioning by the Crimson — senior net-minder Cameron Gornet (1 GA, .941 SV%) made key saves when called upon to preserve the primarily scoreless affair.

Just over seven minutes into the tilt, Harvard forward Austin Wong laid an ugly check on Cornell centerman Matt Stienburg. The collision between freshmen sent Stienburg into the boards close to the Big Red bench, drew an immediate whistle from the referees, and ushered in loud jeers from the Lynah crowd.

Wong was assessed a much-deserved two-minute minor penalty on the play, but considering the nature of the hit and the subsequent officials’ review, the Crimson was lucky to avoid a five-minute major and retain Wong’s services for the remainder of the bout.

The boarding infraction remained the sole critical juncture of the first period. The back-and-forth frame produced just 10 shots between the two foes, split evenly at five apiece, and set the tone for the period to follow as well.

“I think the first period [was successful] before their penalties that kind of cut our momentum down,” Walsh said. “The shots were 5-5, and they had two powerplays…. In the second period, we just tried to stick to our gameplan, same thing we were going with in the first.”

As with any Harvard-Cornell matchup at Lynah Rink, the visitors were forced to endure an aerial barrage of seafood as they skated onto the ice before the national anthem. Each year, the Big Red student section rains hundreds of fish down on the ice before the opening puck drop, and this clash in Ithaca was certainly no exception.

After a two-point weekend that will keep the Crimson dissatisfied, coach Donato’s group now turns to a busy stretch in the schedule, featuring several road trips in between rounds of the Beanpot Tournament. Harvard will look to use this result at Lynah, which easily could have ended in two points for the visitors, as a motivator and stepping stone along the path to the campaign’s home stretch.

“It’s a very, very big step confidence-wise for our group,” Walsh said. “It’s no fluke what that score was. We’ll be in the top 10 soon enough.”