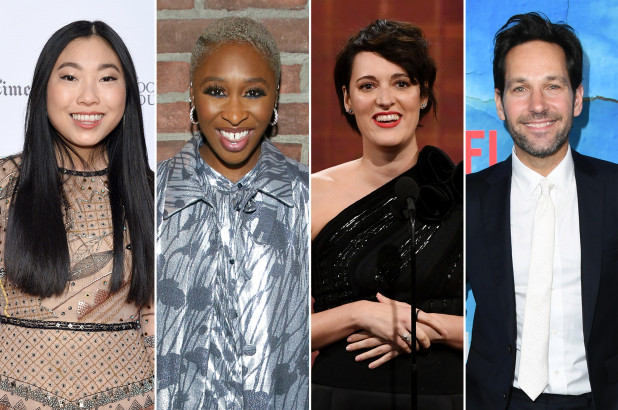 Awkwafina, Cynthia Erivo, Phoebe Waller-Bridge and Paul Rudd, all of whom are first-time nominees for the Golden Globes. By Courtesy of Getty Images
By Branch A. Freeman, Crimson Staff Writer

Nominations for the 77th Golden Globe Awards are out, and the winner is … Netflix?

The awards — presented annually by the Hollywood Foreign Press Association (HFPA) — honor achievement in film and television. In the era of ascendant streaming services like Netflix and Disney+, those categories are beginning to feel somewhat outdated.

This didn’t, however, stop streamers from sweeping the competition this year. Netflix scored a record 34 nominations, more than any other studio (the runner-up, Sony Pictures, earned just 10). And of the five nominees for Best Motion Picture in drama, three are Netflix productions — including Noah Baumbach’s “Marriage Story,” which garnered six nominations, the most of any film this year. Netflix also led in TV, scoring 17 nominations (including four each for “Unbelievable” and “The Crown”).

HBO, seen by many as Netflix’s main competitor in the TV awards race, snagged 15 nominations. It’s a close second, but given HBO’s historic dominance as a producer of prestige TV, that’s not much to brag about. Neither is the HFPA’s snub of the network’s flagship drama “Game of Thrones”: The show’s divisive final season received just one nomination (for Kit Harington’s portrayal of Jon Snow). On the other hand, HBO’s hit miniseries “Chernobyl” received four nominations, bringing it into a three-way tie with Netflix’s two frontrunners in the same category.

No female filmmakers were nominated for Best Director of a film — not a new trend, considering that in the past 70 years, fewer than ten women have been nominated for the category. A surprising exclusion this year, however, was broadcast networks (creating a bit of an embarrassing situation for NBC, who hosts the awards). It’s a first in Golden Globes history, but not all that surprising given the bland medley of police procedurals, family sitcoms, and reality TV competitions that pervade NBC, CBS, ABC, and Fox.

While it’s true that Netflix has transformed the way we access entertainment, audience tastes seem to have mostly held steady. Parts of this year’s lineup of Hollywood heavyweights — which includes Al Pacino, Eddie Murphy, and Meryl Streep — read like a “who’s who” of 1980’s Hollywood. (In fact, those three actors were all nominees in the 1984 Golden Globes as well). Not that we’re complaining. There’s something nice about seeing Martin Scorsese’s name up in lights again — even if it is under a Netflix logo.

—Staff writer Branch A. Freeman can be reached at branch.freeman@thecrimson.com.