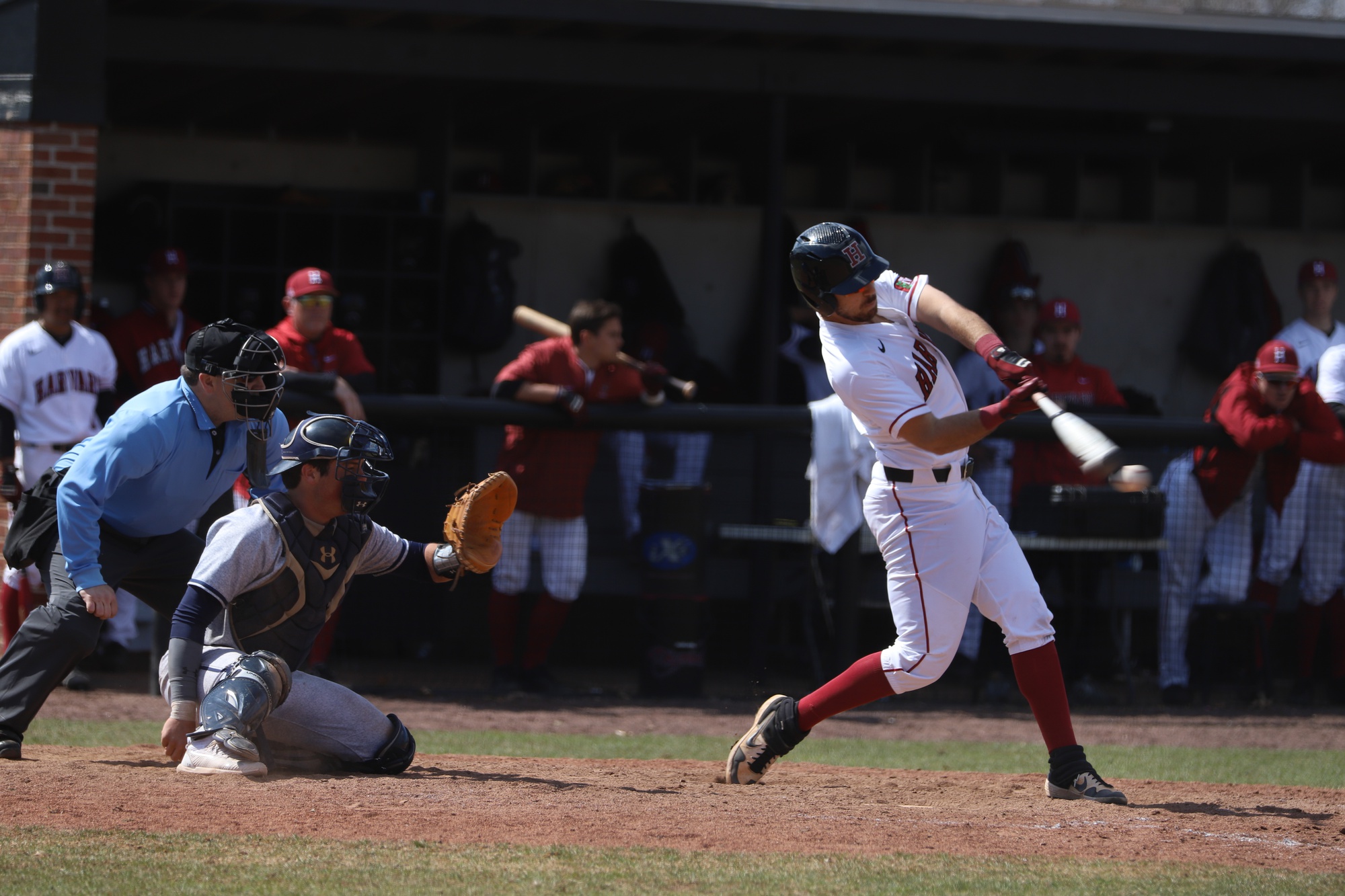 Jake Suddleson '20 takes an at-bat in a 2019 matchup with the Yale Bulldogs. In the 2019 campaign, Suddleson's junior season, the now-member of the Oakland Athletics organization put together a 0.372 batting average with 11 home runs. By Quinn G. Perini
By Eliot Min, Crimson Staff Writer

Jake Suddleson ‘20, a former outfielder for the Crimson, hails from Pacific Palisades, Calif. He has always aspired to play in the big leagues — however, he went undrafted after his junior and senior years despite a breakout 2019 campaign and a strong start to his shortened 2020 season. According to Suddleson, although he was initially disappointed in not being drafted after his junior year, he was able to turn that disappointment into determination and worked harder than ever to break into pro ball.

“It was disappointing but also added fuel to the fire,” Suddleson said. “The only thing to do after [not getting drafted] is to keep working hard and keep playing hard because that’s all you can do.”

After going undrafted again following his senior year, it seemed that Suddleson might have to put his dream on hold for yet another year. But after this year’s draft, he was signed by the Oakland Athletics as an undrafted free agent and was set to begin the season at the team’s rookie ball affiliate in Arizona.

According to Suddleson, although he and his family were ecstatic upon receiving the phone call from the Athletics organization, he did not forget to acknowledge the work he had ahead of him.

“It was just pure joy, to be honest,” Suddleson said. “On the one hand, it’s the call you dreamt about getting as a little kid, but on the other, you realize that the work has really only just begun.”

Suddleson has broken into the minor leagues, perhaps the first step on his path to the major league level — but the journey ahead figures to be a long and arduous one. The coronavirus outbreak earlier this year posed massive challenges for athletes, both at the collegiate and professional levels. Especially for players in the lower ranks of Major League Baseball, the cancellation of the minor league season in late June spelled disaster. Hundreds of players were released from their organizations, leaving their careers and livelihoods in limbo.

In spite of these turbulent months and the ones that are sure to follow, Suddleson has maintained his focus on what he has control over: his desire to play and the work he is willing to put in.

“I don't know what the long-term effects are, or how this affects people's paths going forward or whatever. But I do know that it's not ideal,” Suddleson said. “And the biggest thing for most of us is that we just want to play. So it was kind of hard to just not be able to really do that. You kind of had to find ways to, you know, get your work because those are reps that you can't get back.”

According to Suddleson, he was initially unable to find ways to throw or hit due to the closing of facilities and spaces in response to the coronavirus pandemic. However, once spaces began reopening, he was able to get into a regular throwing and hitting routine and kept himself in baseball form.

“At the beginning, there weren't a whole lot of places to go,” Suddleson said. “So it was just lift what you can, work out where you can, run where you can, throw if you can, hit if you can. It was that kind of stuff. But recently stuff’s started opening up a little bit more, so all that has been a little more accessible. For me personally, [over the summer] I was hitting and throwing pretty much every day, lifting pretty much every day. So it was very much getting ready as if I was going to play.”

One aspect of the unfortunately long offseason that Suddleson struggled with was not overdoing it with his training. According to Suddleson, the lack of in-game action made him feel like he was not doing enough, and he had to keep himself from overworking his body.

“Over the summer, it was just a little hard because that's a time everyone thought that they were gonna be playing,” Suddleson said. “So, at least for me, [it was] a little hard to turn off the hitting every day just because I feel like I already had so much time off, but I know that I really hadn’t.”

Despite itching for game action, Suddleson is not letting his frustration get the better of him. At a time when it is far too easy to look ahead with uncertainty and despair, he is locked in and focused on being fully prepared come next spring.

“All I know is that spring training is scheduled to start in the beginning of March and February, and I'm going to do everything I can to be as prepared as possible for that and ready to go when the time comes. I hope we can play a semi-normal season, but expectations? I don’t want to speculate.”

Suddleson will spend the rest of this offseason keeping in shape, though he will take it easy on the throwing and hitting to give his body a rest. Then, when the calendar flips and it is time for a (hopefully) full season of baseball, he will look to hit the ground running.

— Staff writer Eliot Min can be reached at eliot.min@thecrimson.com