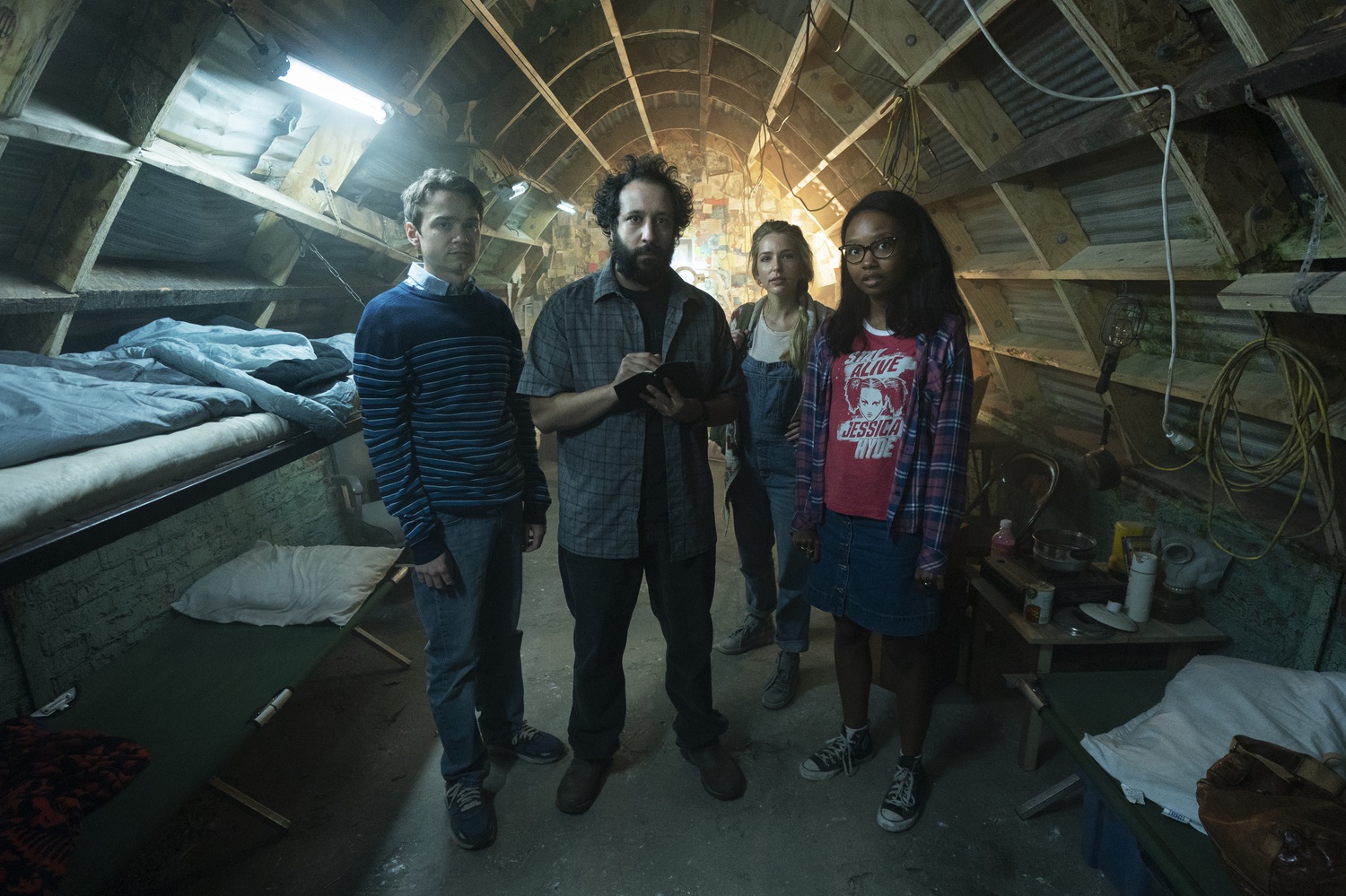 Dan Byrd as Ian, Desmin Borges as Wilson Wilson, Jessica Rothe as Samantha, and Ashleigh LaThrop as Becky in Season One of "Utopia." By Courtesy of Elizabeth Morris/Amazon Video
By Sam F. Dvorak, Contributing Writer

Achieving utopia is hard. The original 2013 British TV show “Utopia” was cancelled after just two seasons, despite somewhat of a cult following. HBO struggled to acquire the rights for an American version of the dark comedy thriller, but it was Amazon who ultimately ended up with them in April 2018. With Gillian Flynn (“Gone Girl,” “Sharp Objects”) as writer and showrunner, the American remake of “Utopia” has finally arrived, and it is bound to attract fans both old and new. The series premiere sets up a mysterious high-stakes story that doesn’t hook you right off the bat, but a mix of confusion and curiosity may be enough to get audiences to episode two.

Episode one — called “Life Begins” — introduces audiences to a group of online conspiracy theorists who think that a comic book called “Dystopia“ is more than just fiction. They believe that the mysterious text has predicted world shaking events — notably terrible viruses like Ebola and Zika. When someone accidentally discovers “Dystopia”’s sequel, “Utopia,” and decides to sell it at a comic book convention, the group meets in person to try and acquire it. At the convention, there are, of course, fans who laugh at them for their fanaticism, but there are also some willing to kill to get their hands on the “Utopia” manuscript.

Many close-up shots on the titular comic book reveal cannibalism, gore, and evil rabbits (very scary). Episode one includes a decent amount of violence. Notably, there are two sequences in which large groups of innocent people are murdered one by one. Multiple characters are shot point blank in the face, and audiences get a different perspective of each murder: head on, from behind, even through a splattering of blood on a reflective plate cover. Despite being unnecessarily graphic at times, these killings are effective in creatively communicating the show’s high stakes: These antagonists aren’t playing around.

The show’s protagonists, on the other hand, are not nearly as eerie. We meet them as they geek out to each other over the discovery of the “Utopia’ comic, in a sequence where viewers see them in split-screen alongside their text messages. With very little spoken dialogue, this intro gives a well-edited albeit cursory look at the main characters. It isn’t yet clear why they want “Utopia” so badly, or how they came together in the first place, but this episode does succeed in establishing a team of people who’ve gotten involved in something much bigger than they realize. Notably absent from this episode was the character Michael Stearns, played by Rainn Wilson (“The Office”). Wilson’s prominent role in the series’s trailer was very exciting to many fans, who will likely be disappointed by his absence in episode one.

The opening credits for this first episode are jarringly reminiscent of the news: a montage of environmental disasters, police holding back protesters, and viruses in petri dishes. The comic book “Utopia” is said to be able to predict deadly viruses, and, in heavy-handed foreshadowing, news reports of a mysterious flu are heard in the background throughout the entire episode. Obviously, audiences’ minds will likely immediately jump to COVID-19, even though the show — whose filming was already complete by the fall of 2019 — could not have intended for this parallel. This thriller TV series is sure to dramatize the experience of a pandemic, an occurrence that was once far removed from “real life.” For audiences sick of living through a pandemic and turning to TV for some escapism, this may hit a little too close to home.

Are the events of “Utopia” actually real, or just a conspiracy? Who is pulling the strings behind the scenes? Despite its imperfect beginning, if it ramps up its character development and maintains the intrigue and suspense, “Utopia” will keep many viewers enthralled in its remaining episodes.

All eight episodes of “Utopia” Season One are now available to stream on Amazon Prime Video.