No. 18 Men's Hockey Drops Beanpot Consolation to No. 7/6 Boston College 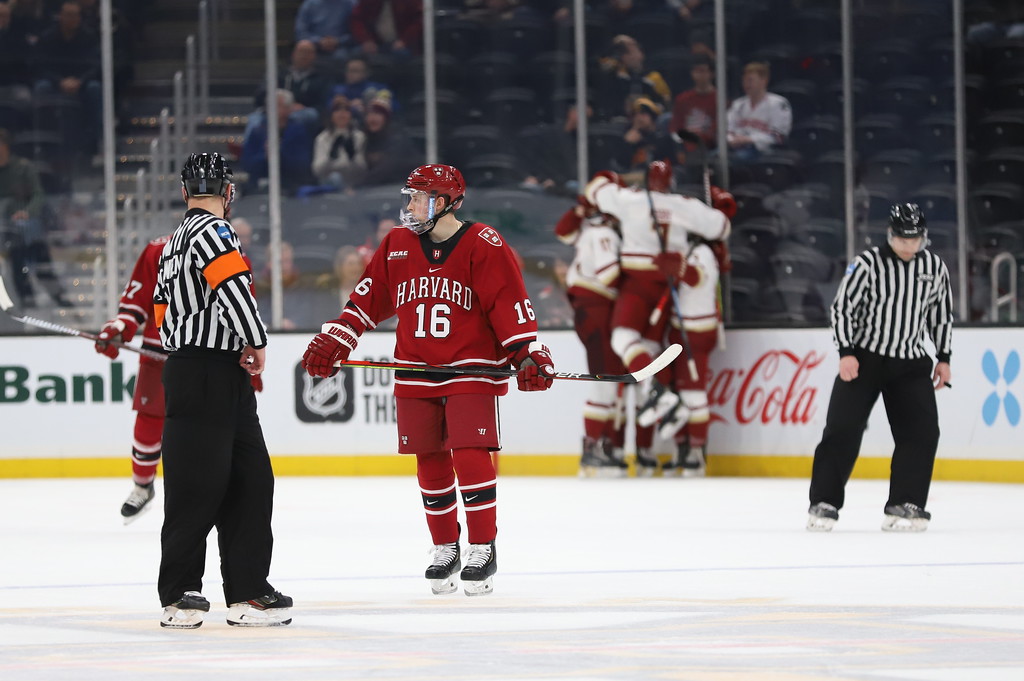 On Monday night, Boston College celebrated while Harvard suffered a setback ahead of the regular-season homestretch. By Owen A. Berger
By Spencer R. Morris, Crimson Staff Writer

BOSTON — On Monday night, the Harvard men’s hockey team played in a game it had hoped to avoid.

“The focus wasn’t there,” Harvard coach Ted Donato ’91 said. “We talked about not really creating offense for them, and we did. We gave them two shorthanded goals, several bad changes, things that are very controllable…. They’re a very good team, very skilled and talented. But to me, I just don’t think we made them have to work to get those great chances.”

Harvard brought the nation’s top powerplay into the contest and even converted on it early in the tilt. Nonetheless, on Monday the man-up unit was the cause of the Crimson’s ruin.

Midway through the second period with the Eagles ahead, 3-1, forward Graham McPhee took a hooking penalty to give Harvard the extra man. Over the ensuing two minutes, BC potted not one, but two shorthanded goals, deflating the Crimson bench and suppressing the likelihood of a comeback.

Freshman forward Alex Newhook and sophomore forward Jack McBain were responsible for the Eagles’ NCAA-leading eighth and ninth man-down tallies on the year. After McBain’s tuck — his second of the night — the result was all but decided.

“It’s an important game for us [in terms of the] Pairwise [rankings],” Eagles coach Jerry York said. “We’re disappointed that we’re not playing for a trophy tonight at eight o’clock. We don’t shy away from that fact. That’s what we want to do, win trophies. We didn’t get a chance to do that tonight, but good win for Pairwise, as far as national seeding.” 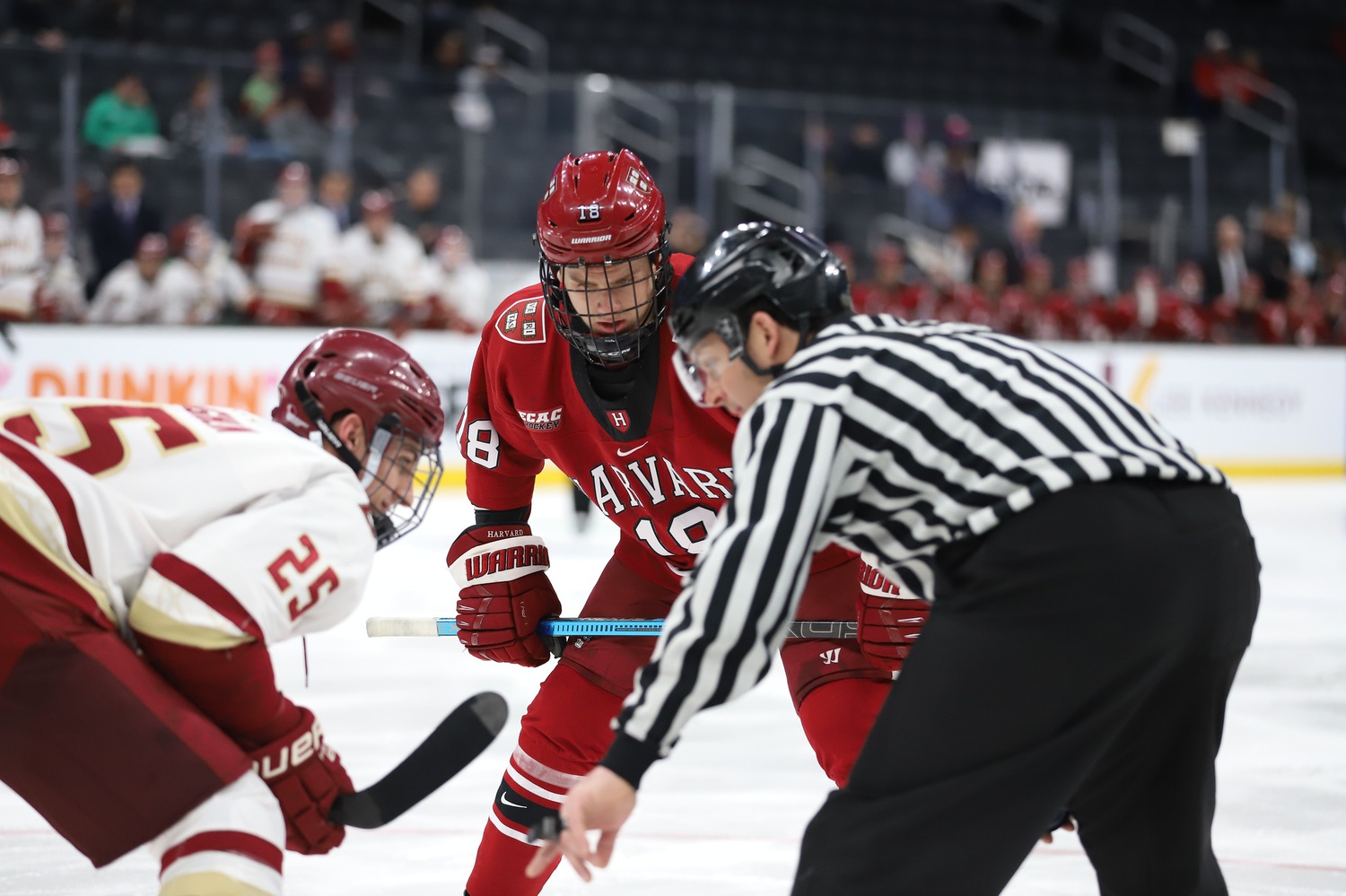 While the consolation game is not ideal for either squad, the crosstown rivals who battled on Monday night had plenty to play for, including the Pairwise rankings. By Owen A. Berger

With the win, BC picks up its second triumph over Harvard this season after a late-November matchup went in its favor. Since coach Donato took the helm ahead of the 2004-2005 campaign, the Crimson program has posted a dispiriting 1-10 record against the Eagles in the Beanpot. Monday also marks the first time since 2016 that Harvard has finished fourth in the storied hockey classic.

The final stanza saw the adversaries trade chances, with BC finding twine for the seventh and final time. The third-period goal was the sole strike against senior Cameron Gornet (1 GA, .857 SV%), who replaced rookie Mitchell Gibson (6 GA, .800 SV%) between the pipes after the second intermission.

The barrage thrown at the Harvard backstops helped the Eagles preserve the edge they had built by the first-period horn. Late in the first frame, McBain sent a pass goalward from behind and to the right of Gibson. The errant attempt ricocheted off the skates of Crimson sophomore defenseman Marshall Rifai and into his own net, representing another atypical score, along with the two shorthanded notches, that made a difference on Monday.

Before the blowout affair took shape, Harvard opened the game on a positive note. Despite the sluggish atmosphere characteristic of the “early game” of the Beanpot’s second week, it did not take long for action to arise. Within a minute of the incipient puck drop, the referees whistled Eagles forward Matthew Boldy for slashing.

On the man advantage, Harvard sophomore forward Casey Dornbach ripped a one-timer from the left circle past BC net-minder Spencer Knight (2 GA, .929 SV%), getting his squad off to an ideal start.

The snipe marked the 19th time in 23 games this season that the Crimson has executed on the man advantage. This consistent success has yielded the league’s top conversion rate (31.3%). Even with the early tally, though, Harvard’s powerplay ironically was its downfall on Monday evening.

“There was a lot of the game left,” coach York said. “We’ve scored first goals early, too, and not won those games. I thought our kids were pretty resilient. We came right back and had some excellent chances early in the first period. [But it’s] always a bummer to start with an early penalty and then give up a goal.” 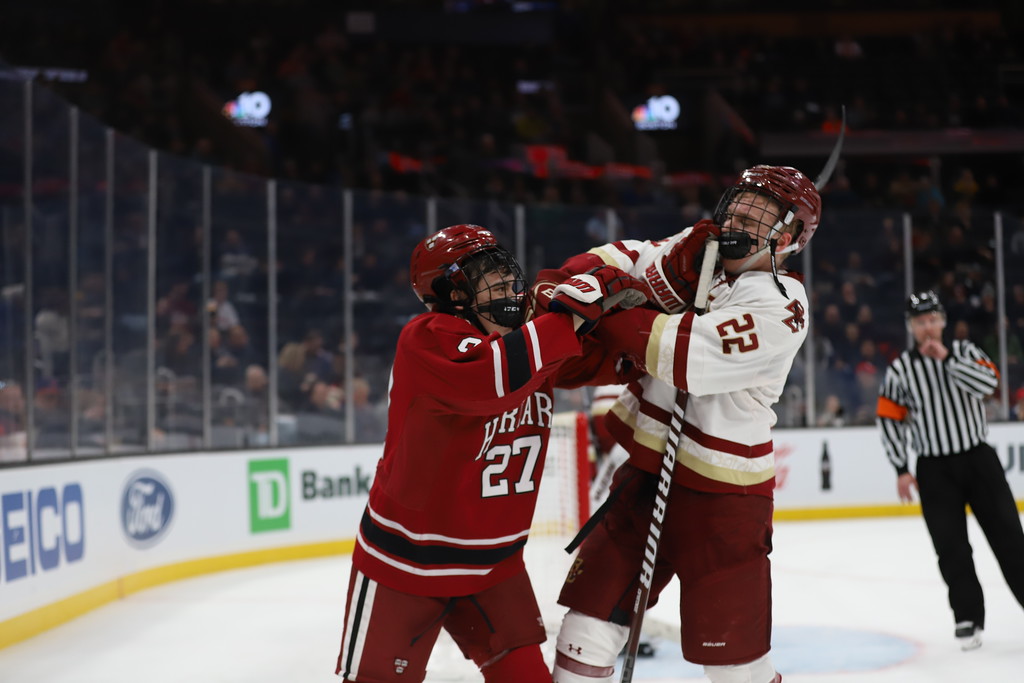 A frustrating performance in a frustrating game resulted in tensions boiling over late for the Crimson. By Owen A. Berger

Twelve minutes after Dornbach’s pretty goal, Eagles captain David Cotton evened the ledger and confiscated the lead from the Crimson, which would never own it again.

Mattila, who logged the primary assist, registered his 100th career point (37–63—100) on the play. The Finnish centerman has collected seven (2–5—7) of these points against Harvard in six meetings.

“We had, I think, six different goal-scorers in the game, which was good,” Mattila lauded. “We got our contribution from all four lines.”

While a five-goal disparity correctly suggests that BC dominated on multiple fronts, perhaps the Crimson could have benefitted from the services of junior blue-liner Reilly Walsh, who was absent from Monday’s roster following a lower-body injury sustained in practice this past week. The puck-moving defenseman brings both scoring prowess and experience to the Harvard back end and remains day-to-day ahead of Friday’s upcoming rivalry match with Yale.

“Harvard is missing one of their very best players in the Walsh boy,” coach York said. “The absence of one of their best defenseman, our ability to get two breaks [while] shorthanded…that’s a pretty good turn of events for us during the game.” 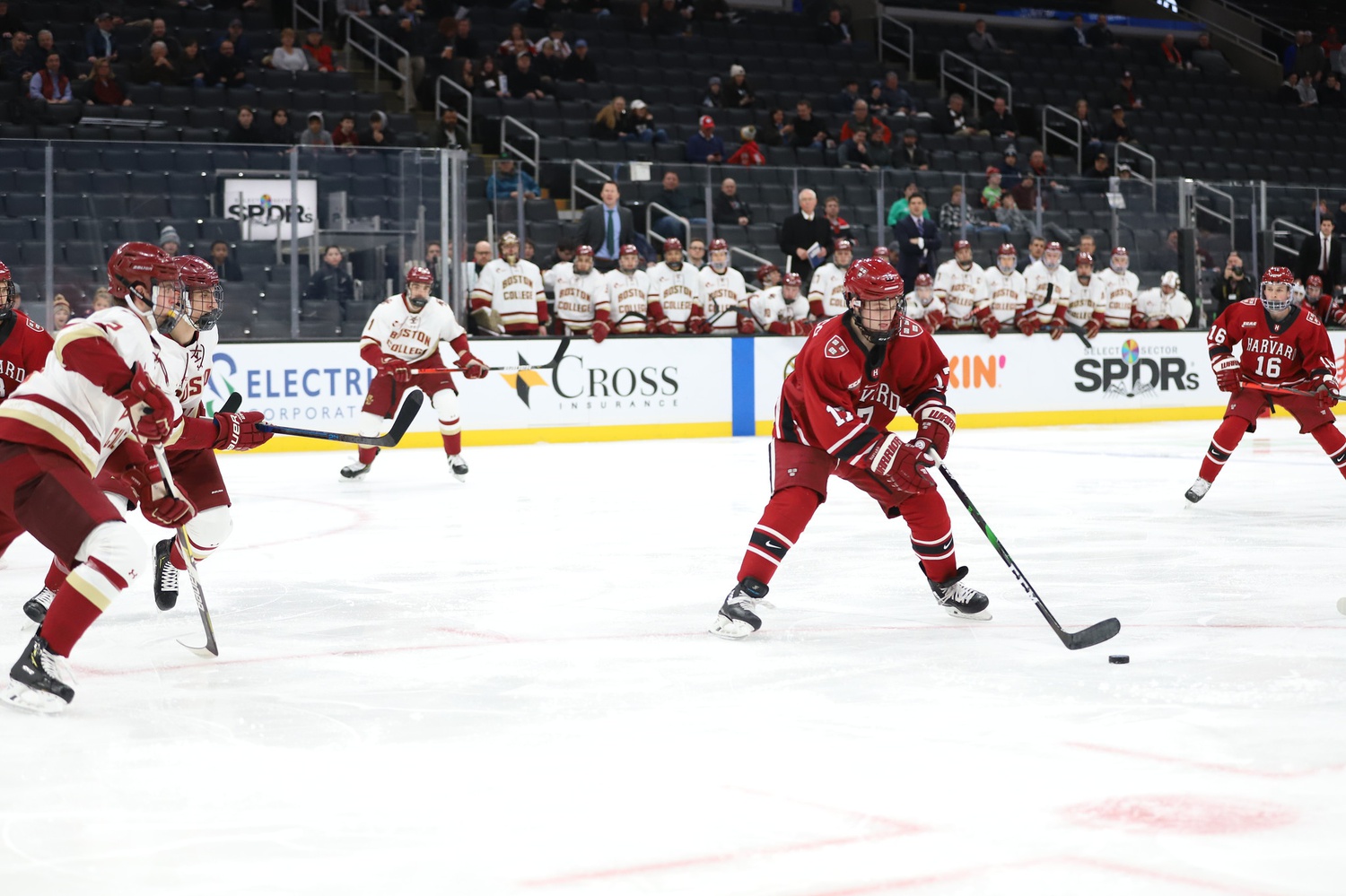 Of course, placing fourth in the Beanpot is far from the outcome that coach Donato’s group desired. And the aura of the consolation game affixes an asterisk next to any takeaways one might derive from the performance.

That said, Monday’s defeat continues a season-long trend for the Crimson: a lack of statement wins against marquee opponents. Previous losses to the Eagles, Boston University, No. 2 Cornell, No. 5/7 Clarkson, and No. 12 Northeastern represent missed opportunities to pocket crucial victories for the Pairwise rankings, the determinant of at-large NCAA Tournament berths.

To finish the regular season, Harvard turns back to the ECAC slate for six contests. All else being equal, Harvard would have to win out to be ranked among the top 16 teams entering the conference tournament, which itself provides more opportunity for ranking improvement.

For now, the squad will strive for a top-four seed and bye week in the ECAC playoffs — in which a deep run could earn the talented Crimson a spot in the national tournament.

“Everything is still right in front of us,” coach Donato said. “We still have a lot to play for. As a group, we’ve shown flashes of the type of team we can be…. We have been inconsistent, and we’ll have to improve on that as we play down the stretch, but I really enjoy this group. They work hard, and I really believe that there’s some good things to come with this group at the end of the season.”