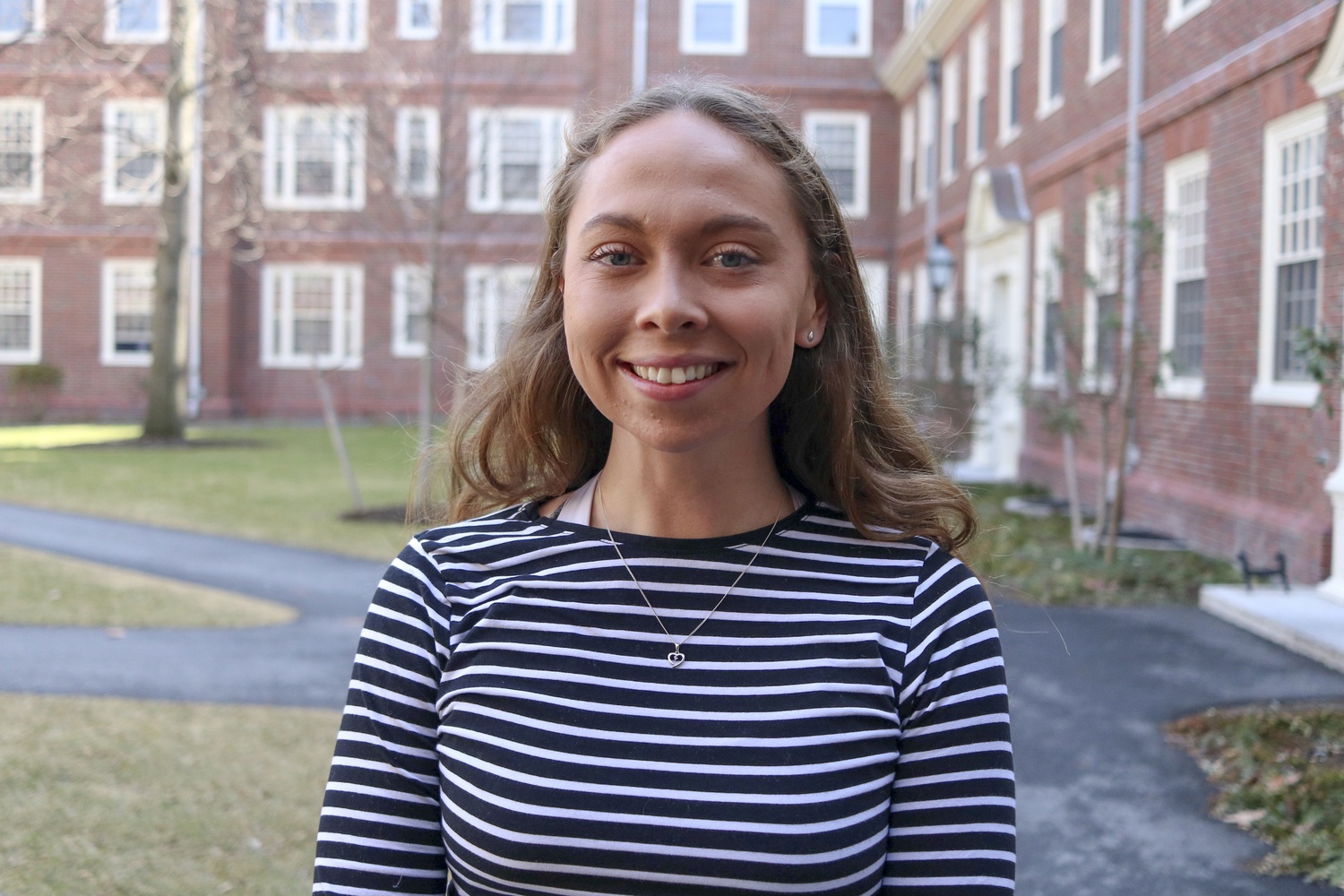 Madison J. H. Earle '20, co-president of the Student-Athlete Advisory Committee and member of the women's field hockey team, was a key figure in the creation of a program meant to target mental health issues for student-athletes. By Jonathan G. Yuan

Hailing from New Zealand, she came to Cambridge to pursue an Ivy League education and compete at the Division I level for Harvard’s field hockey team.

In the fall of that year, Earle excelled on the field; she helped her team win an Ivy League title for the first time in 12 years and scored Harvard’s sole goal in the NCAA tournament that year.

Earle’s success on the field, however, belied the fact that she was battling severe health issues. Recovering from bouts of meningitis and encephalitis that she contracted during her senior year of high school, she still suffered from residual symptoms, including migraines and constant fatigue. In the spring of 2017, she developed celiac disease, which brought on frequent vomiting and hair loss.

As a result, Earle fell behind in the classroom and on the field, frequently missing classes and practices. She said she felt embarrassed and isolated.

Harvard provides a wide range of health resources to its students. Still, Earle said she did not know where to turn.

“No one reached out to me when I was going through a really tough time,” she said. “I really struggled freshman year because I wasn't able to reach my potential because I didn't know anything.”

Now a senior, Earle — who serves as the co-president of the Student-Athlete Advisory Committee and co-founded Women of Harvard Athletics — helped launch a program designed to increase student-athletes’ awareness of health resources on campus and make them feel comfortable reaching out for help.

Created in collaboration with Harvard’s Counseling and Mental Health Services and the Harvard Athletics Department, the initiative aims to “integrate and facilitate the knowledge of mental health and wellbeing services into the lifestyle of Harvard student-athletes,” according to the program’s mission statement.

Unveiled last month, the program designates one student-athlete on each of Harvard’s 42 sports teams as a Student-Athlete Wellness Leader who will help their teammates navigate Harvard’s health and wellness resources.

‘Someone Different Than a Coach or Authority Figure’

CAMHS counselors Melissa Nauman and Darryl Lemus held a training session on Jan. 28 to familiarize student-athlete representatives with available health resources and prepare them to have sensitive conversations with their teammates.

Men’s ice hockey SAWL Casey D. Dornbach ’22 said he found the session informative and came away with a better understanding of all of the resources available to student-athletes, ranging from academic support to mental health counseling to nutritional advising.

He also said he thinks he can best help others as a teammate, rather than a counselor.

“We're not the experts. We are here to be, hopefully, someone who can point them in the right direction or simply be there to listen,” he said. “Someone different than a coach or authority figure who can listen and potentially help direct or be there for a friend or teammate.”

CAMHS chief Barbara Lewis wrote in an email that student-athletes can play a particularly effective role in facilitating their teammates’ use of mental health resources.

“The SAWL program is not a counseling service, but rather a complement to pre-existing CAMHS programming available to our student athletes,” she wrote. “We realize that students may prefer to reach out to a peer rather than an adult, and we want to support innovative opportunities that make it easier for students to engage with their peers to help them get the resources and support that they need.”

Women’s basketball head coach Kathy Delaney-Smith acknowledged that athletes may be reluctant to voice their concerns to their coaches. She said that she supports efforts to improve the mental health of Harvard’s athletes.

“There's a great need for helping student-athletes navigate emotional problems, mental challenges,” Delaney-Smith said. “So in that regard, I'm thrilled that there’s an initiative to try something.”

To excel at their sports, athletes work hard at maintaining peak physical shape. Several SAWLs agreed that physical health is critical to athletic performance, but they noted that mental health also plays a vital role in their success.

Field hockey SAWL Elizabeth A. Denehy ’22 said she struggled while adjusting to Harvard during her first year, grappling with feelings of inadequacy.

Once Denehy confided in her teammates, she said she finally felt accepted.

“Once I talked about my feelings with people on my team, everyone was like ‘yeah, we feel the same way.’ Once I was open about it, I realized how much better life was and I was,” Denehy said. “So I just want to help others on my team or people in general get to that point where they realize that they're not alone.”

Football SAWL Spencer C. Rolland ’22 said that, after taking advantage of health counseling, he felt like a weight had been lifted off of his shoulders.

“I think being able to speak kind of released that tension and kind of made it more relaxing and made me able to focus more on what I was doing,” he said.

Rolland added that working to improve one’s mental health is “like any other muscle in your body or any other training that you do.”

“You need to make sure that it's in its best shape so that you can compete at your highest level, whether it be in the classroom or on the field,” he said.

Earle said discussions surrounding mental health at Harvard are more common now than when she was a freshman.

In March 2019, Harvard Athletics and CAMHS co-founded the “Crimson Mind and Body Performance Program” to provide additional mental health support to student-athletes in response to survey data. Through the program, licensed clinicians work with student-athletes and coaches. At the time, athletes said the program was important because of the stigma some face seeking mental health-related help.

This past fall, men’s hockey player Derek E. Schaedig ’22 wrote about his struggles with mental health in an article for The Crimson.

“It's really become a huge conversation. And so, I wanted to take advantage of that while I could to make sure people knew the resources and could be helpful people to their teammates,” she said.

Rolland said counselors and resources at Harvard have done a “great job” of helping students through health challenges they may face.

Still, he said dialogue surrounding mental health has yet to make its way into daily conversation.

“It's not gonna be the first thing that they bring up to people or may not be one of those things that's necessarily in the locker room,” he said. “I think there's definitely room to grow.”

Dornbach said he hopes more people will speak up about mental health challenges they face.

“I've seen people who look like the happiest people ever on the outside and something's going on inside,” he said. “It's not often talked about or looked at as cool to maybe discuss some of those things, but it's real and it's okay to not be okay.”