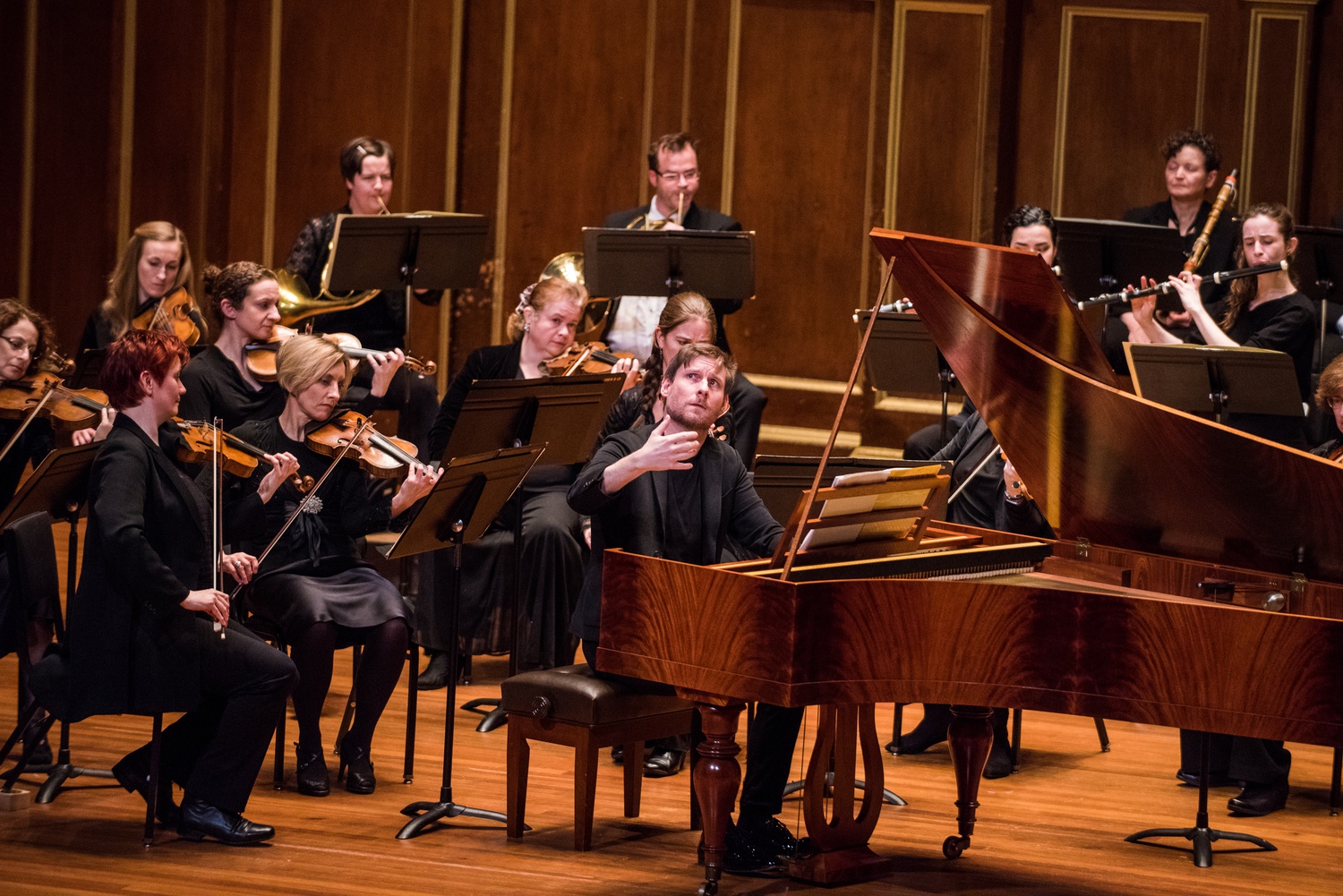 Renowned fortepianist Kristian Bezuidenhout made his directorial debut with the Handel and Haydn Society on Valentine’s weekend, performing works by C.P.E. Bach, Beethoven, and Mozart. H+H has distinguished themselves as a period orchestra that delivers authentic renditions of classical works. Period orchestras like H+H provide concert-goers with the experience of what a piece might have sounded like centuries ago at the premiere. Chasing a replica of an original performance proves an elusive goal, and any performance nowadays seems to have inescapably modern elements. It is borderline impossible to ensure accurate acoustics for a concert hall in a given era, provide gut strings or baroque bows for string musicians, and find authentic, non-replica instruments. H+H charmed the audience in their original interpretation, but their performance serves as a reminder to consider what might be lost in the quest for authentic period performance.

H+H’s rendition of Beethoven’s Third Piano Concerto was true to the time period, but disappointingly so. The fortepiano sounded timid in comparison to the strength and richness of the orchestra. Bezuidenhout’s playing was sensitive and graceful, and the intricate composition of his original cadenza contributed to the authentic period performance. But while the second movement was intimate and subtle, the dainty whispers of the fortepiano did not fill the cavernous performance hall in the first and third movements. The voicing in some of the more complex passages seemed asymmetrical; some interesting harmonic lines didn’t permeate through the fortepiano’s playing. Flashy runs felt muddy and passages that typically set the keyboard ablaze felt restrained. In this case, the cost of authenticity was losing the soul-stirring emotions that more powerful performances of this momentous work (typically on modern pianos) can ignite within audiences.

At the premiere of Beethoven’s Third Piano Concerto, the intimate sound of the fortepiano was a product of the technology of the time. Over the two centuries between then and now, pianos have been engineered to produce clearer, more robust sound. This might not have been the sound that Beethoven would have heard at the premiere, but it is entirely possible that he would have wanted some of the advantages of the modern piano in this concerto. After all, Beethoven was well-known for breaking fortepianos while trying to extract more sound from them. The development of the modern piano presumably arose from a desire to improve upon perceived shortcomings of the fortepiano, among which is the production of a bold sound. Furthermore, in the time since its premiere, audiences have come to expect that this concerto will command the stage, and in this sense, the fortepiano fell short.

The fortepiano was a far better fit for the works in the second half of the concert, where it sparkled in two different pieces by Mozart. Bezuidenhout enthralled the audience with a delicate interpretation of Mozart’s Rondo in A Major, K. 386. The lower strings of H+H played brilliantly and there was a satisfying contrast between the robust solos of the principal cellist, Guy Fishman, and the delicate lines of the fortepiano. Throughout this work, however, there was a nagging feeling that perhaps if this concert were in a smaller concert hall, the fortepiano would have had a greater presence. Nonetheless, the fortepiano was thoroughly enjoyable in this context, and brought a radiant yet intimate timbre that distinguished itself from interpretations of this work on modern instruments.

H+H’s rendition of Mozart’s 36th Symphony demonstrated why they are and should remain a beloved ensemble. Their performance was pristine without feeling sanitized. Period instruments furthered the airy quality of Mozart’s work and the music floated effortlessly through the hall. Every phrase was satisfyingly constructed and crisp. The winds and brass, especially principal bassoonist Andrew Schwartz, were dazzling, although the trumpets were confusingly exiled from the back of the orchestra with their position in between the timpani and basses. In the exuberant final moments of the performance, the joy of the musicians was palpable.

This concert garnered two well-deserved standing ovations from an audience hungry to understand what this music would have sounded like while the composers were alive. Seeking authenticity proves a challenge, and a period performance can be for better, as was the case of Mozart, or for worse, in the case of Beethoven. Utilizing the instruments of a given time period can provide insight into a composer’s life and work, but it can come at the cost of distinct advantages from modern instruments. Sometimes, a performance on period instruments can be uniquely perceptive. Others], antiquated period instruments should not be cause for nostalgia. But regardless, Bezuidenhout and H+H alike gave impassioned and thoughtful performances.