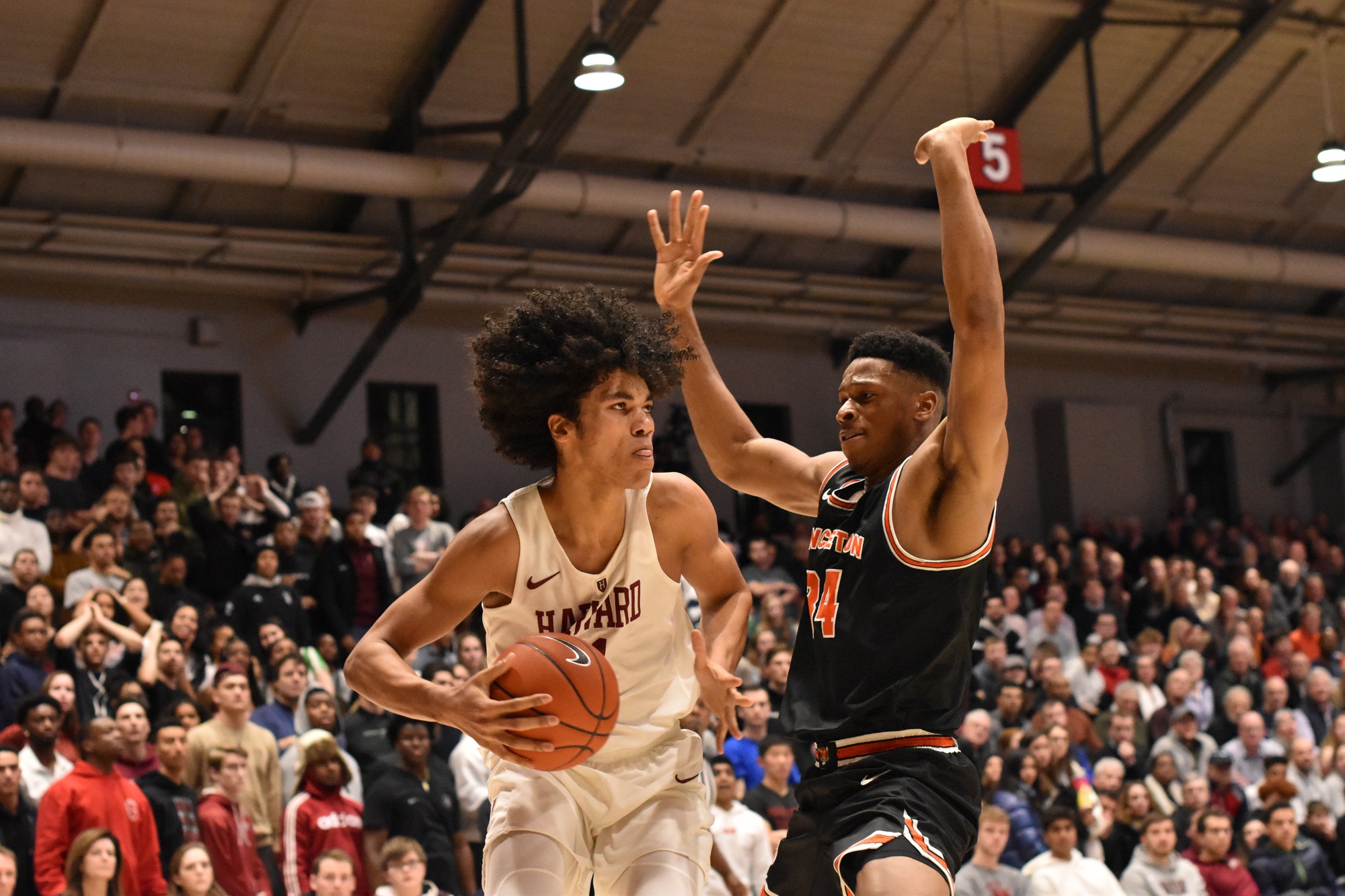 Up 61-60 with less than a second left, Harvard just needed to successfully inbound the ball in order to clinch the win. Having had blunders on the final possession against both Yale and Brown this season, this was its chance for redemption.

In typical Ivy League fashion, Princeton stole the inbound pass, and sophomore guard Jaelin Llewellyn attempted a three-pointer to try and steal the game from the Crimson. To the relief of the sold-out crowd at Lavietes Pavilion, Llewellyn’s shot missed right and Harvard narrowly escaped with a victory.

In another nerve-wracking finish, the Crimson (16-7, 6-3 Ivy) preserved its undefeated home streak against the Tigers (11-11, 6-3 Ivy). But in what was a grueling back-and-forth matchup, it was the relentless second-half play of sophomore forward Mason Forbes that made the difference.

“I just want you to know that we don't win this game tonight at all without Mason Forbes,” coach Tommy Amaker said. “I just thought that his spirited play off the bench energized our team. He made It was tough around the rim with the blocks he had, and just made just big plays when we needed it. I’m really proud of him.”

Playing a season-high 22 minutes, Forbes finished the game with 11 points, 7 rebounds, and 4 blocks and had a team-high plus-minus of 9. The Folsom, Calif. native scored crucial baskets for Harvard down the stretch including the layup that would give the team its first lead in the second period.

While Forbes’ scoring would ignite the Crimson offense in the second half, it was his defensive prowess that proved to be the key difference in the game. With Princeton having the ball with just under twenty seconds left in the game with a chance to take the lead, Forbes came up with the game-saving block that would allow Harvard to hold on for the victory. His fourth block of the game was indicative of his defensive awareness throughout the contest. 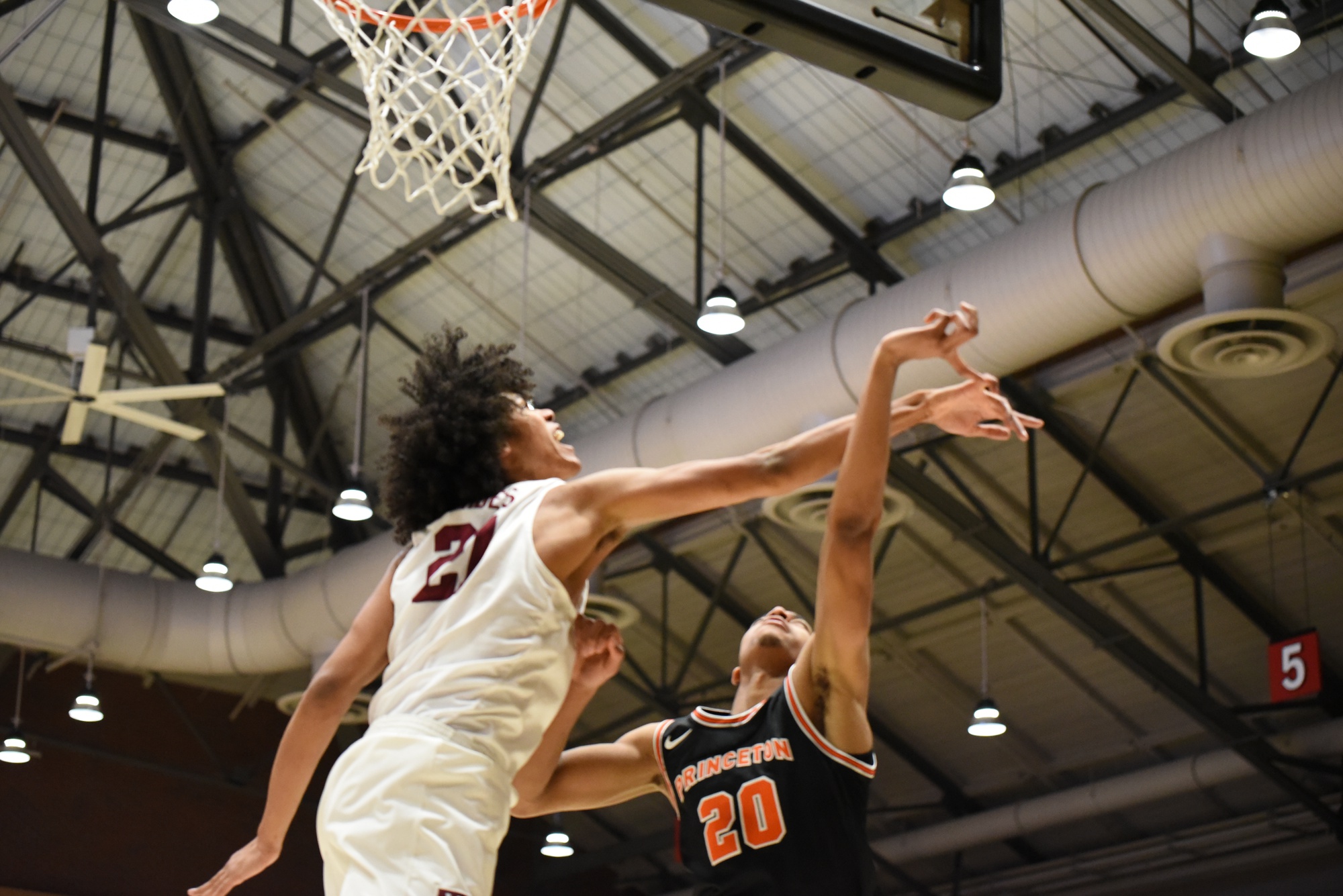 The Crimson's defensive efforts late in the contest helped preserve its victory. By Erica Denhoff

“I was really focused on staying engaged, especially locked in on defense,” Forbes said. “So when I saw that Llewellyn had beat our guy I was just ready to step over and get it. And I’m always staying ready to make those plays for our team. Coach really put emphasis on doing the little things and I felt that those are some things I was able to do this game to help us win.”

“We were trying to stay in front of the ball as best as we can,” senior guard Christian Juzang said. “And it makes it a lot easier when our bigs are beating stuff on the backboard, so you know that backline eventually stepped up for us tonight and made a lot of big plays down there. So that was a big help for us in stopping Princeton’s runs. “

Despite a great defensive effort, the win did not come easy for the Crimson. In a game that saw Harvard shoot 15 percent better from the field than the Tigers, it was Princeton that led for the majority of the game. The Tigers were able to stay in the game because of their ability to create second-chance opportunities off of offensive rebounds and the Crimson’s poor execution from the charity stripe. Princeton had 14 second-chance points while Harvard shot 4-of-13 from the line.

“They were just doing a good job of going and get their own misses,” Amaker said. “They did a nice job of taking advantage of that and we did a poor job awesome looking to block out the shooter.”

An offensive bright spot for the Tigers was sophomore guard Jaelin Llewellyn who scored a game-high 22 points. He helped Princeton seize the early momentum by scoring 12 points on 5-6 shooting in the first eight minutes of the contest.

“He was tremendous tonight and especially in the first half,” Amaker said. “I thought that we did a poor job of initially guarding him. With good players and good scorers you have to really make it difficult for them early. And when they get anything easy early, the game changes, and it was obvious that happened right after he got that first layup on the very first possession.”

Nevertheless, after his hot start, the Crimson stepped up its defense and held Llewellyn to just 10 points on 3-of-13 shooting for the rest of the game.

Harvard looks to make it ten in a row at home tomorrow night when it faces Penn at Lavietes Pavilion at 7 pm.