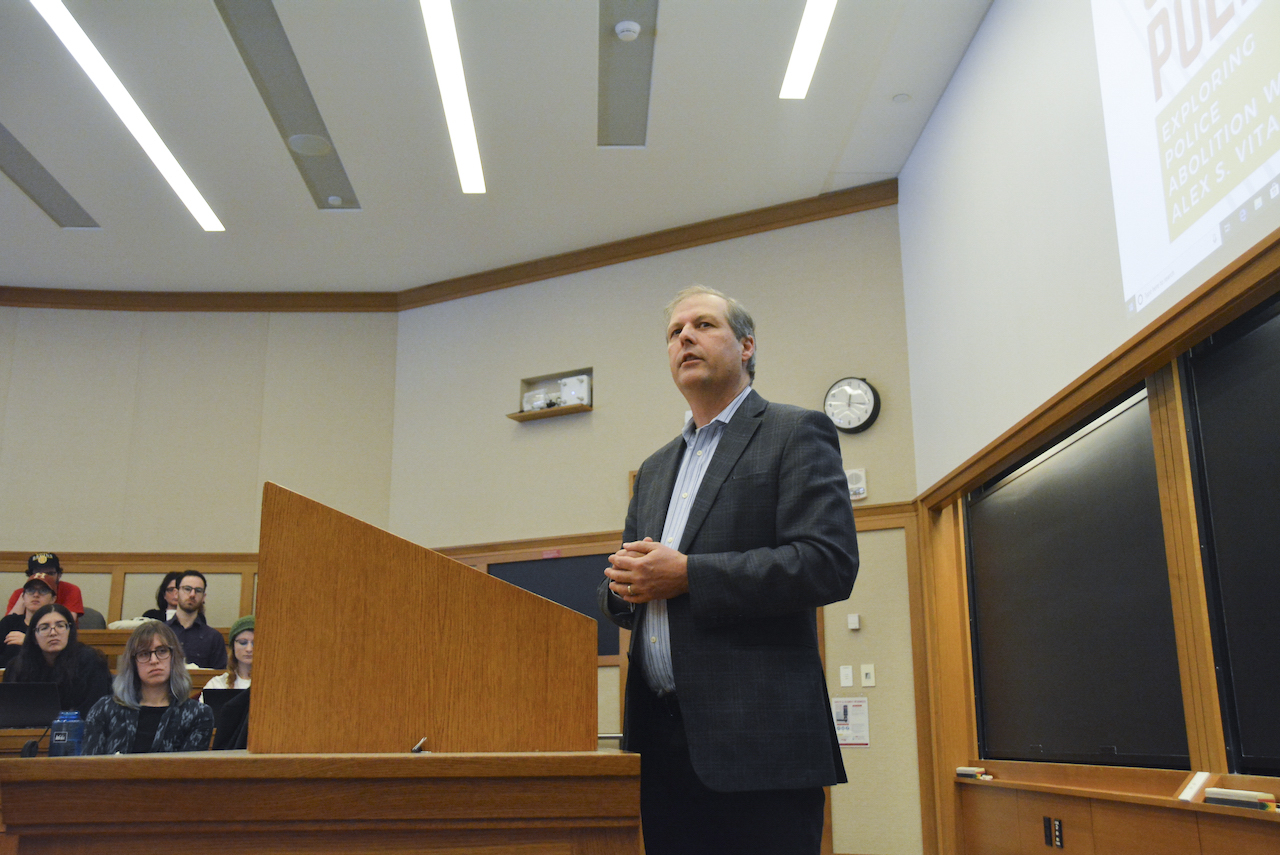 Alex Vitale, the coordinator of the Policing and Social Justice Project at Brooklyn College, addresses issues with policing in the United States at a Harvard Law School event Thursday. By Jenny M. Lu
By Kelsey J. Griffin, Crimson Staff Writer

Vitale serves as the coordinator of the Policing and Social Justice Project at Brooklyn College and on the New York State Advisory Committee of the U.S. Commission on Civil Rights. He also consults various international human rights organizations and police departments.

The talk, sponsored by Unbound: Harvard Journal of the Legal Left, addressed a range of challenges posed by current police reform efforts. Promoting his book, “The End of Policing,” Vitale described what he views as the dangers of modern policing tactics and suggested alternatives to the police system.

He began the talk by recounting the story of Deborah Danner, a mentally ill woman who was fatally shot by a New York City police sergeant in 2016. According to Vitale, Danner’s case calls into question the effectiveness of police training on mental health.

“The reality is that between a quarter and a half of all people killed by police in the United States are having a mental health crisis,” he said. “It’s the number one indicator of likelihood of ending up being killed by police.”

Vitale also argued that policing has not had any success in curbing drug addiction in the United States. He blamed the creation of harsh drug policies on a lack of political accountability, claiming that measures such as improving training, increasing gun control, and “hiring a few black police chiefs” are not effective.

“In too many of our big cities, politicians who claim to be our friends — who come out on the picket line with us when someone is killed by the police — go back to City Hall and vote to hire more police instead of expanding community-based mental health service, instead of creating drug treatment on demand,” he said.

In an interview after the event, Law School student Leighton Watson said she feels that serious consideration of the proposal to abolish policing nationwide would first require a clear, agreed-upon definition of what police abolition should practically entail.

“Defining what the scope of abolition actually is is where there are gaps,” he said. “For example, when one person means abolition — is that a complete end of what we call policing, or is there still some function in society, someone that responds to you with a gun?”

In his talk, Vitale acknowledged the impossibility of eradicating all police services at once. However, he maintained that there is a great need for systemic change.

“No one is talking about, ‘tomorrow we flip the switch and there are no police,’” he said. “The reality is we have a massive infrastructure of policing and criminalization, and we need strategies to get out of this mess, and those strategies do not include implicit bias training, community policing, body cameras, et cetera.”

Sharon I. Brett, a senior staff attorney at the Law School’s Criminal Justice Policy Program, said in an interview that understanding deep-rooted problems in the nation's policing system is a key step towards creating a better version of that system.

“It's important to think about this framework when we're doing criminal justice reform work and, particularly, to think about the historical context of the institutions that we’re attempting to reform in order to understand whether or not they can be reformed,” Brett said.