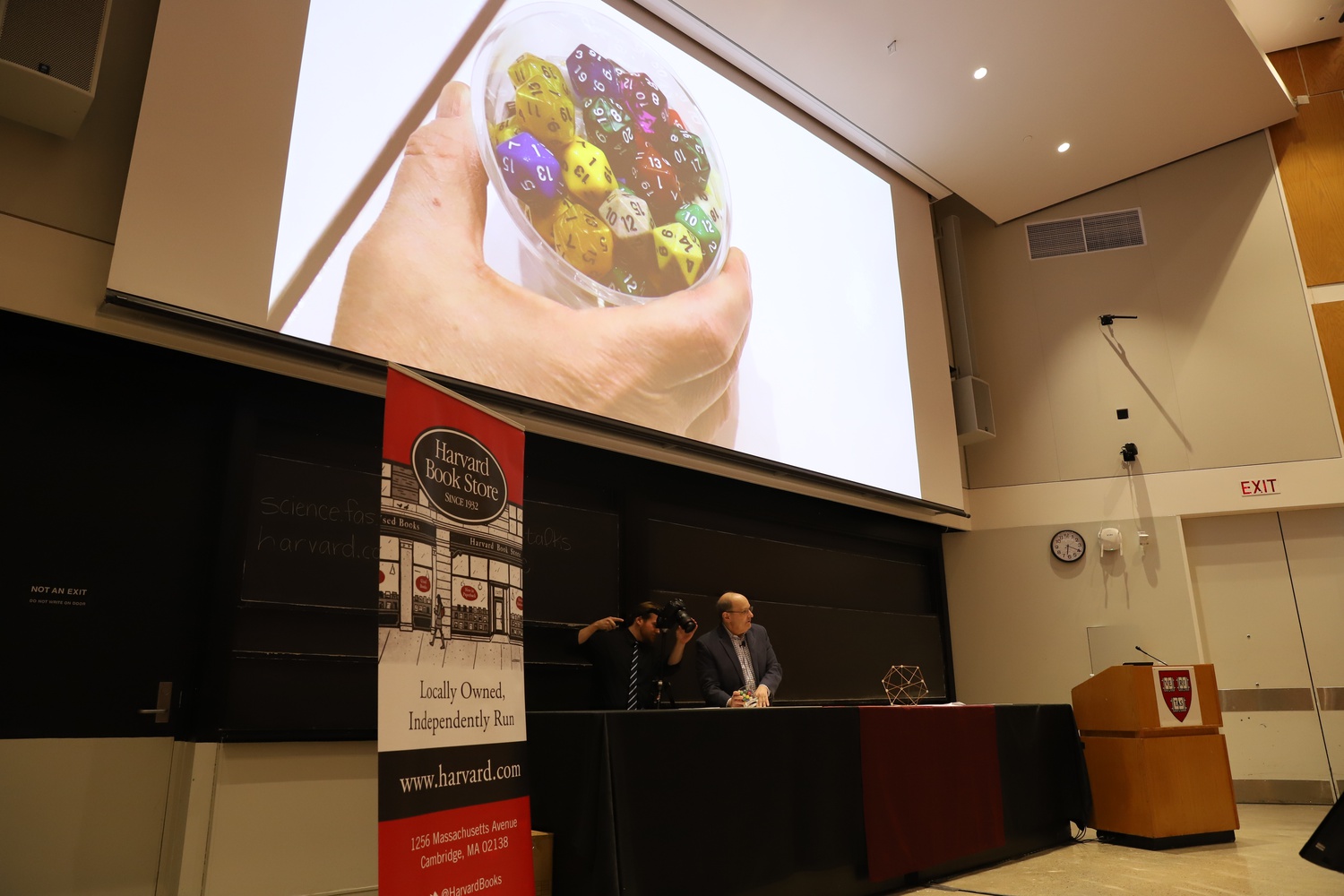 Paul Steinhardt, Albert Einstein Professor in Science and Theoretical Physicist from Princeton University, speaks about his book, "The Second Kind of Impossible: The Extraordinary Quest for a New Form of Matter," in the Science Center Thursday evening. By Pei Chao Zhuo
By Esat C. Bayar, Contributing Writer

Hundreds of Harvard affiliates and science enthusiasts packed into a Science Center lecture hall to hear physicist Paul Steinhardt discuss his new book, “The Second Kind of Impossible”, and his nearly 40-year quest to find a new form of matter Thursday evening.

The talk was one of a series of Harvard Science Book Talks featuring authors of recently published science books. Steinhardt, who teaches at Princeton University, discovered the natural origins of a form of matter called quasicrystals.

“Our job as a scientist is to prove the impossible to be possible,” Steinhardt said.

He added that he believes in two sets of “impossible” discoveries: ones which violate the laws of physics, and ones which undercut scientists’ long-held assumptions.

“Maybe if I look closely, and we examine what everyone’s been assuming all along, I’ll discover some loophole, some mistakes everyone has been making after this time, in which case it’s the second kind of impossible, impossible which is impossible until you notice that loophole and then there’s the opportunity for the main discovery,” he said.

During the talk, Steinhardt used geometric props to demonstrate how atoms serve as the building blocks of all matter. He also explained a variety of complex physics subjects to the audience members, who ranged from pre-K teachers to college students.

Audience member Romy Aran ’23 said the “winding” path Steinhardt took before making new discoveries stood out to him. Before publishing his research on quasicrystals, Steinhardt said he spent years searching for diaries key to his work and dealt with international smugglers and KGB agents.

“I’ve never heard of such a degree of commitment to such a project before,” Aran said. “That was really incredible.”

“The guy tells a great story,” Cambridge resident Macky Buck, who also attended the talk, said. “What stood out to me is that there is so much that we don’t know, and it’s utterly fascinating. Here’s this piece of a meteorite that fell in remote Russia, and it reinforced a bit of theoretical physics. What else don’t we know? That, to me, is kind of thrilling.”