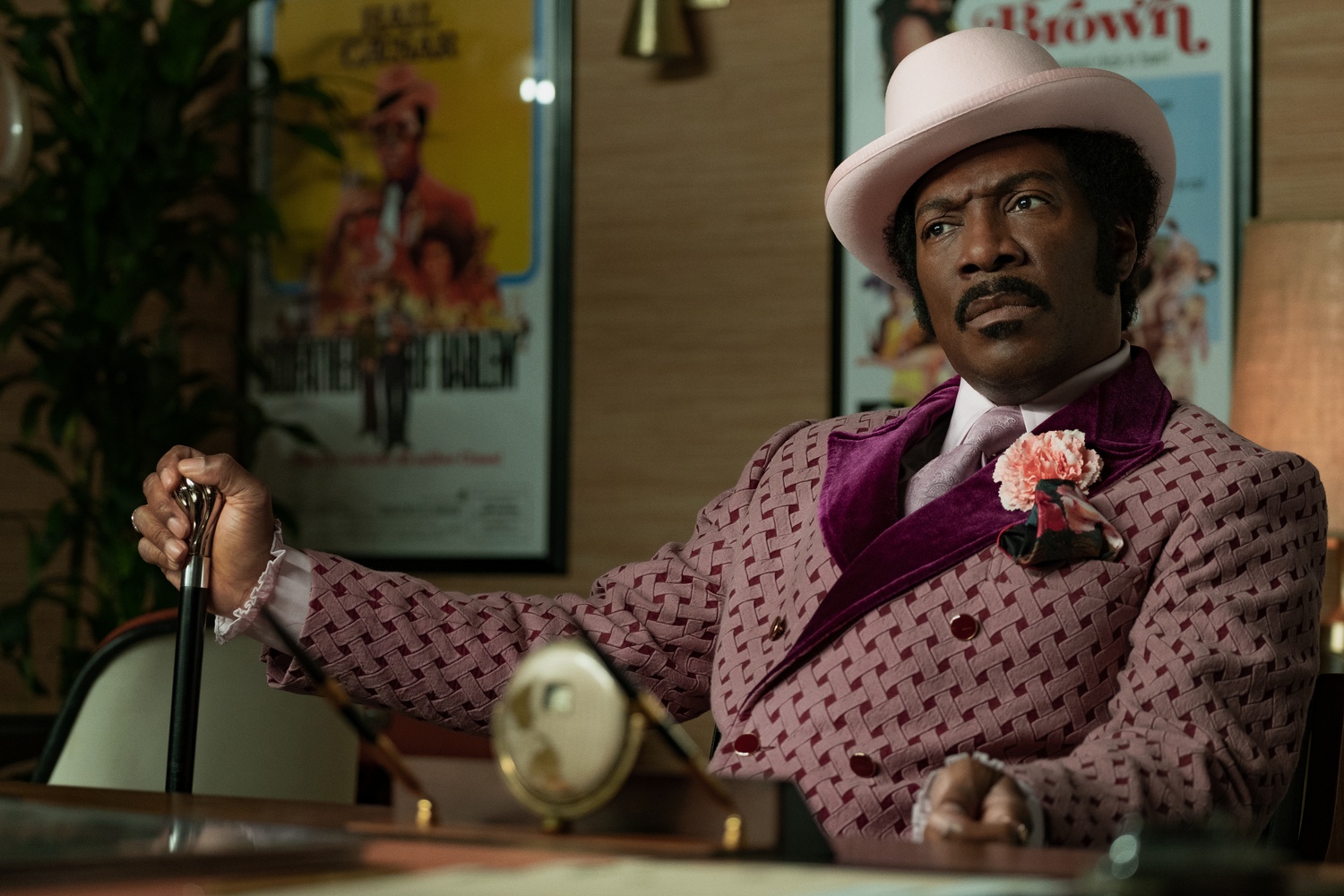 Overtly vulgar and salacious, “Dolemite Is My Name” is an unabashed celebration of the spirit and life of 1970s blaxploitation-era film icon Rudy Ray Moore (Eddie Murphy). The film chronicles Moore’s unlikely rise from penniless recording artist to Hollywood star through his hilariously absurd alter-ego — the one and only wig wearing, pimp cane swinging, kung fu fighting Dolemite.

From its opening scene onward, the film is alive with the spunk and spirit of ‘70s style. Moore lives in the bustling streets of Los Angeles, amid its characteristic urban sprawl of clubs, liquor stores, adult theaters, and drive-ins. As a humble shop clerk at a vinyl records shop — one who has been turned down repeatedly as a recording artist — Moore’s aspirations of becoming a Hollywood star had begun to wither. That is, until he has a fateful encounter with street bum Ricco (Ron Cephas Jones), who tells him stories of “ghetto folklore” — including the legend of Dolemite. Inspired by what he hears, Moore believes he has found his opportunity, and decides to present himself as a “ghetto-pimp” badass of his own design. Afro? Check. Paisley suits? Check. Topped off with a pimp-cane and overstated saunter, Moore prepares himself to present “Dolemite” to the world.

In a beautifully shot sequence akin to a superhero “donning the mask,” Moore completes his transformation in his next appearance at a local comedy club. With a spotlight shining from above and a low camera angle, Moore appears at the podium like a giant, looming over the frame. It is in this moment that viewers understand he is no longer Moore: He is Dolemite, in the flesh. In response to this arrival, the rhythm of the scene changes — cutting more frequently, and panning across the crowd as Moore begins to speak. Slowly, the crowd at the bar begins to thaw and sway to Dolemite’s rhythm, finally receptive to Moore’s comedic voice.

The film recreates the conception of the iconic 1975 “Dolemite” film in a glittery audio-visual spectacle. The vibrant period costuming, set design and musical selection of “Dolemite Is My Name” pays homage to the spunky style and feel of the original film. On their way to a meeting with a film agency, Dolemite and company saunter through the frame with ‘70s peacock fashion sensibilities on full display. Fur collared midi-coats and pinstripe pant legs billow behind them as they walk in slow-motion, lockstep to the tune of Bomar’s funk-inspired “Dolemite” theme. In an interview with The Los Angeles Times, costume designer Ruth E. Carter described how the diversity of fashion trends displayed in the film grant a dimension of realism to each character: “If you broaden the trends with more nuance, they won’t appear like caricatures,” she said.

Despite the titular character's spotlight-stealing flair, the “Dolemite” experience would be incomplete without Moore’s committed production team — an all-star supporting cast including Keegan Michael Key as screenwriter Jerry Jones, Wesley Snipes as director D’Urville Martin and Da’Vine Joy Randolph as actress Lady Reed. While the entire cast shares fabulous chemistry, the interplay between Wesley Snipes and Eddie Murphy, in particular, is comedic gold. Nowhere is this more apparent than their physical theatricality in the final scenes of Moore’s “Dolemite” film. Viewers have the distinct privilege of watching a bloodied Murphy scream like Bruce Lee in “Enter the Dragon,” as he gut-punches and rips the entrails from a wide-eyed Wesley Snipes, who in turn blinks and groans hysterically before flopping about in his “death throes” like a fish out of water. This outlandish scene ends up sharing the same energy as the “finish him” sequence in a Mortal Kombat videogame.

In contrast, Murphy's portrayal of Moore is far more grounded and vulnerable than his badass pimping alter-ego. In one scene, having sold his apartment, car, and records due to a financial crunch, Moore finds himself staring into the mirror in a moment of introspection. Gritting his teeth and reciting his lines, Murphy exudes a certain underdog charisma that bleeds through the screen. “Whatever it takes, I’m ready to do it,” he says. “I gotta be totally outrageous!”

At the film's conclusion, standing before the manifestation of his success at the premiere of his film “Dolemite”, Moore passes on his underdog creed to a young boy waiting outside the theater. Moore hands the boy his golden Dolemite cane, telling him, “Never let nobody tell you you can’t be anything you want to be." In this resolution, “Dolemite Is My Name” communicates a surprisingly earnest take on the value of self-belief and sacrifice. As the boy looks up at his hero, viewers see in his eyes the continuation of Moore’s legacy — the audacity to make a name for himself in the bright lights of the city, with nothing but swagger and a dream.