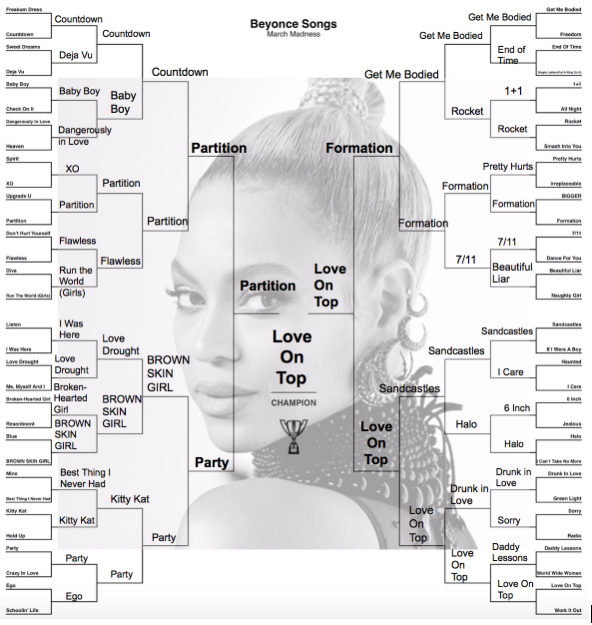 The madness of March has passed, but the joy of filling out March Madness-style brackets lives on — especially during this extended period of being inside and online. One such bracket, of the many that have widely circulated across social media feeds and various corners of the internet, features the work of the exemplary, faultless, and unbeatable singer Beyoncé.

Although trying to rank Beyoncé’s works borders on sacrilege, listening, comparing, and articulating what makes her songs great is a joyous exercise for anyone familiar with her discography. While this bracket could be completed in countless defensible ways, the above represents just one humble account of Beyoncé’s best. This evaluation process took into consideration musical content — melody, harmonies, vocals, beats — as well as lyrics, featured musicians, and larger themes of the work.

The first round immediately involved some tough decisions. Tragically, top-seed picks “Drunk in Love” and “Green Light” faced off against each other in the first round. But “Drunk in Love”’s sultry melodies edged out “Green Light”’s perky enthusiasm. The historical collaboration between Beyoncé and Shakira, “Beautiful Liar,” defeated “Naughty Girl”’s breathtaking vocals. One of Beyoncé’s more mainstream songs, “Single Ladies (Put a Ring on It),” was bested by “End of Time,” a less-popular, just as catchy, and just as classic song with a marching-band style that echoes Beyoncé’s unforgettable “HOMECOMING” performance at Coachella (colloquially referred to as Beychella).

“Countdown”’s iconic musical elements — the opening vocal riff, the chromatic scale countdown, the cogent harmonies — gave the song enough momentum to beat out solid competition. “Get Me Bodied," especially the danceable extended mix, inspires and motivates. The raw emotion of “Sandcastles” proved tough to compare with arguably less intimate songs, giving it the edge over “Halo” and “I Care.” “BROWN SKIN GIRL” — nurturing, empowering, and enhanced by a feature from Beyoncé’s daughter Blue Ivy — made short work of its competitors.

“Party”’s creative and elaborate harmonies coupled with its carefree style skyrocketed it to the top four. The unrelenting beat of “Formation,” along with its unapologetic lyrics and subtle wordplay landed it among the top contendors as well. Despite a close stalemate with “Flawless,” “Partition”’s bold and memorable lyrics, including “Yoncé all on his mouth like liquor,” “He Monica Lewinsky’d all on my gown,” and social commentary in French, “les hommes pensent que les féministes détestent le sexe / mais c’est une activité très stimulante et naturelle que les femmes adorent (‘men think that feminists hate sex, but it's a very stimulating and natural activity that women love’),” took out much of the competition.

At the top — unsurprisingly and deservedly — is “Love on Top.” The bubbly melody never gets old, Beyoncé’s silky voice is gorgeous (as usual), and the mind-boggling five modulations from C major to E major, each bringing with it more energy and power, make this song impossible to beat.

The real winner of this bracket, though, is anyone who gets to listen to hours of countless Beyoncé hits in their efforts to fill it out.