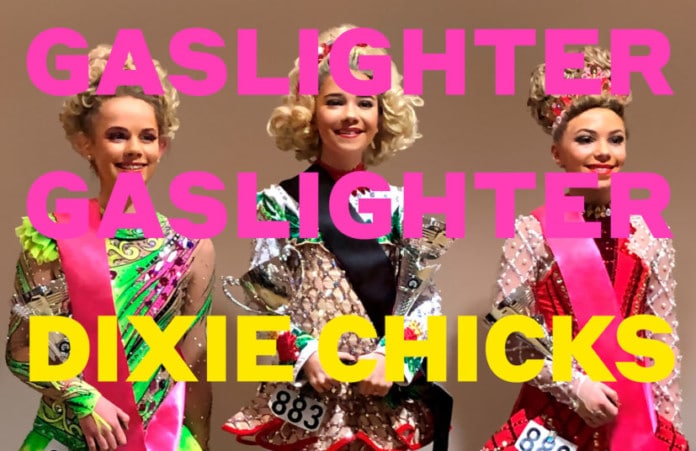 The Dixie Chicks all but fell off the face of the earth after lead singer Natalie Maines told a London audience that they disagreed with President George W. Bush’s invasion of Iraq on Mar. 10, 2003. After that fateful day, the whole of country music decided to blacklist the all-female country pop group. Country radio banned them from the airwaves with virtual unanimity, fans trashed their CDs, and what was once the best selling U.S. female band of all time stopped making music for 14 years.

But after rumors the Dixie Chicks were releasing new music emerged following their feature on Taylor Swift’s 2019 song “Soon You’ll Get Better,” the group came out with a new single, “Gaslighter.” With it, they announced a forthcoming album of the same name.

“Gaslighter, denier / Doin' anything to get your ass farther / Gaslighter, big timer / Repeating all of the mistakes of your father,” the trio begins, all singing a capella, forcing the “gaslighter” to listen and listen closely. The song takes no prisoners as the Dixie Chicks call out Maines’s ex-husband Adrian Pasdar for crime after crime. “I believed in the promises you made to me / Swore that night 'til death do us part / But you lie-lie-lie-lie-lied,” Maines sings, her voice cutting through the song’s upbeat guitar strumming.

At every chorus, all three members join their voices to criticize the gaslighter, creating a sense of solidarity. The instrumentation, too, contributes to this strength as the guitar and bass drum become more incessant with each of Maines’s attacks, only to fall away as she addresses the gaslighter one last time. “Gaslighter, I'm your mirror / Standin' right here until you can see how you broke me / Yeah, I'm broken / You're still sorry, and there's still no apology,” she sings lightly, accompanied only by the song’s silence before being again joined by the rest of the band for the final chorus.

For fans of the Dixie Chicks, the track has that same rebellious energy of songs like “There’s Your Trouble” and “Not Ready To Make Nice.” It is already one more of their scathingly unapologetic anthems. But its standing as their comeback single after more than a decade of being wholly ignored makes it all the more powerful. The Dixie Chicks are back, and with “Gaslighter,” they show that they are just as ready to stand up for themselves as they’ve ever been.