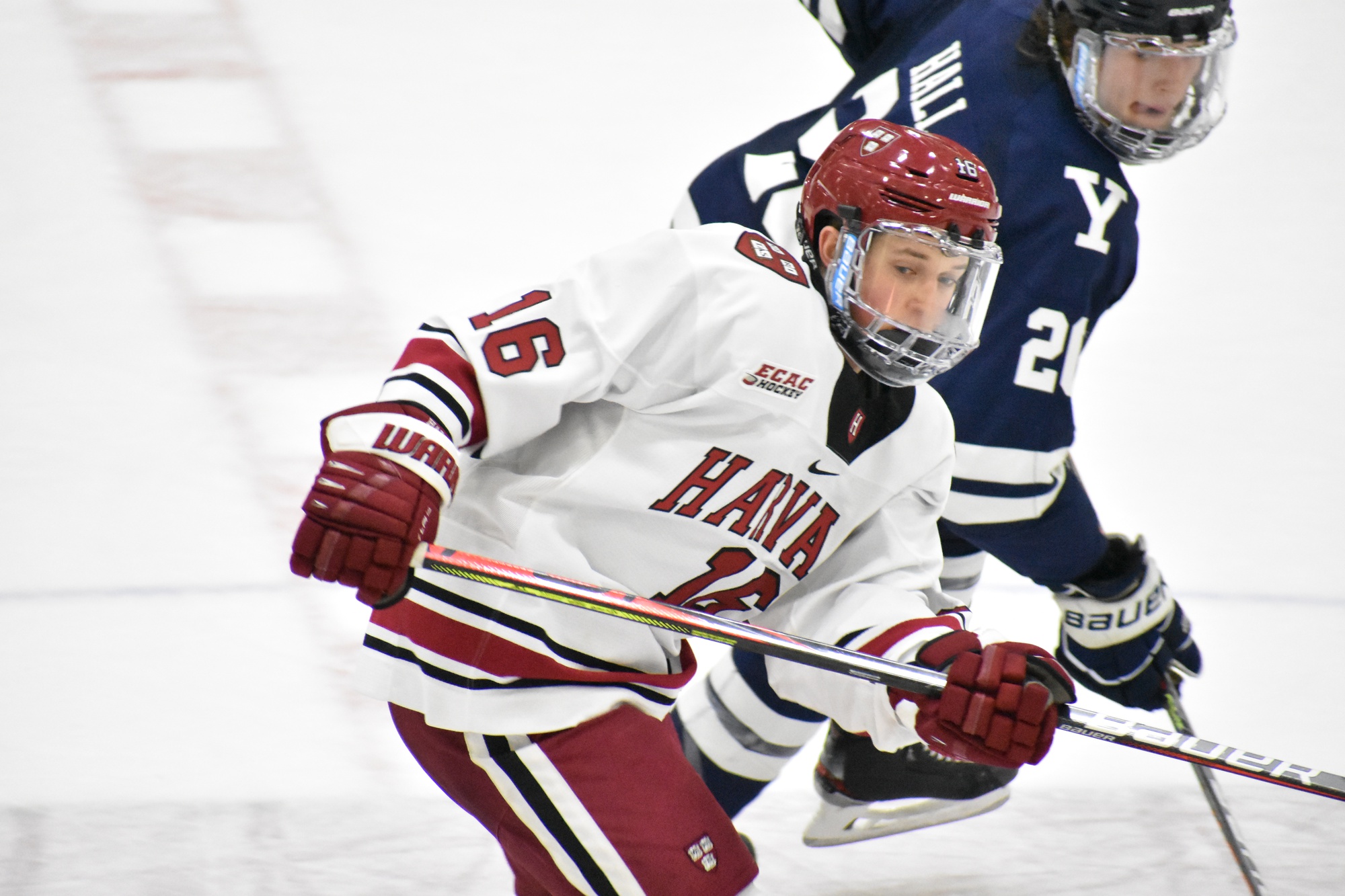 Another Accolade: Nick Abruzzese, Male Rookie of the Year

The Crimson is not the only entity to give first-year forward Nick Abruzzese post-season accolades: his conference already has. The ECAC labeled him the rookie of the year in men’s ice hockey, thanks to a 44-point 2019-20 campaign. The conference also reserved spots for the first-year forward on the all-ECAC First Team and the ECAC All-Rookie team. The 14-goal and 30-assist season did not just resonate in New England: the high-flying numbers garnered national recognition, earning him Second-Team All-American honors from CCM/AHCA Hockey. After all, a 1.42 points-per-game average did rank second in the NCAA, topped only by Jack Dugan of Providence.

Digging deeper into the points breakdown, Abruzzese showcased his knack as a facilitator, more than doubling his impressive goal total with his assist numbers. Abruzzese averaged just about an assist per game on a powerful line that featured sophomore forwards Jack Drury and Casey Dornbach, who had 20 and 12 goals respectively, aided in part by Abruzzese’s ability to get them the puck.

“His [Abruzzese’s] vision, his skating, his hands are all incredible,” said Drury in a February interview with The Crimson. “He understands how to play give-and-go hockey. He’s one of the best passers I’ve ever seen… It’s been nice to at least find a little chemistry this year.”

Indeed, when evaluating the linemates, head coach Ted Donato ‘91 noted their ability to play off of each other and complement each other’s games, a characteristic that syncs with Abruzzese’s ability to facilitate.

“As far as Dornbach, Drury, and Abruzzese [are concerned], I think they’re real students of the game,” Donato said. “They found ways to share the puck and utilize each other’s strengths to be successful.”

Abruzzese is not just a passer though — his potential to score timely goals also merits attention. In his 14-goal campaign, three times he put up two-goal games, and not just in any games. In October against Dartmouth, albeit in a scrimmage, Abruzzese showed the stage was not too bright with two goals in his collegiate debut. In an upset of a top-10 Clarkson team, the first-year again came through with two goals. And finally, in a rivalry game against Yale, a contest in which the Crimson trailed 4-1, Abruzzese spearheaded the comeback. The rookie skater not only added two goals but also contributed two assists, involving himself on every score en route to Harvard clawing back to a 4-4 tie.

Diving deeper into his stats, there are other reasons to take note of the rookie season. Three game-winning goals emphasize his trend of timely scoring. 18 power-play points from Abruzzese powered the already high-octane unit that would go on to convert 31.2% of the time. And with only four penalty minutes on the season, the forward managed to avoid the sin bin almost entirely.

With the pros of the accolades and numbers that Abruzzese and his linemates put up, however, come some cons. Next season, the trio will not only have earned the attention of the coaches and media but also of fellow competitors.

“The challenge for them is to find ways to make their offensive success more versatile so that they can find success in different styles of games or different defensive scenarios that they might face,” Donato said. “The challenge also becomes being able to do it again when people are even paying more attention to you.”

Despite future challenges and inevitable opportunities for improvement, Abruzzese’s rookie season offers a promising building block for the Crimson. In fact, his hockey career continues to trend upward. Before Harvard, while playing for the Chicago Steel of the USHL, Abruzzese turned in an 80-point effort in a 62-game 2018-2019 season. The numbers caught the eye of the Toronto Maple Leafs, who selected Abruzzese with the 124th overall pick in the 2019 NHL Draft. With 2019-2020 in the books, Crimson supporters are not the only ones that have taken note, nor will they be the only ones paying close attention to what he has in store next in a Harvard uniform.