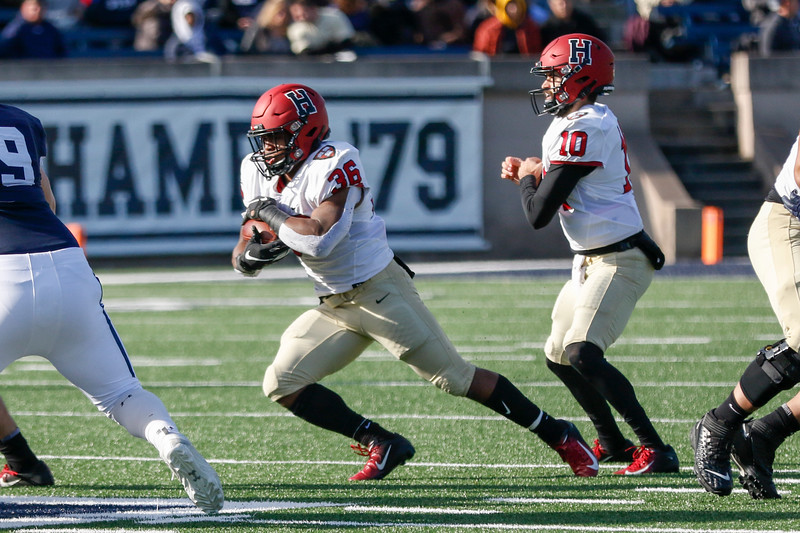 Senior running back Devin Darrington carries the ball against Yale in what may prove to be his final game in a Harvard uniform. By Timothy R. O'Meara
By Joseph W. Minatel, Crimson Staff Writer

Senior Crimson running back Devin Darrington has officially entered the transfer portal in the face of the Ivy League’s cancelled fall sports season.

The standout rusher led the team’s powerful rushing attack last season with 102 carries for 734 yards, adding seven touchdowns as well. The rising senior was honored for his efforts with an All-Ivy second team selection, and was named to the Phil Steele Preseason All-Ivy second team for the upcoming season, despite its cancellation.

According to ESPN, a “big part” of Darrington’s decision was the uncertainty surrounding the upcoming Ivy League football season. On July 8, the Ivy League cancelled its fall sports season, becoming the first collegiate sports conference to do so. The Ancient Eight was also the first mover in the spring, as it was the first conference to cancel spring athletics, doing so on March 8.

Darrington still has two years of eligibility remaining, and his planned graduation in the spring of 2021 would allow him to complete his Harvard degree while sitting out from football the required year to participate in the transfer portal. Darrington would then be able to compete as a graduate student for a non-Ivy team, as the Ivy League has not permitted graduate students to participate in athletics since its founding in 1954.

Darrington told ESPN that multiple schools, including those from the SEC and ACC, have reached out. The upcoming season for other conferences is still in doubt, despite released plans with reduced schedules.

All of college football is currently operating under massive uncertainty, including Darrington. “Nothing is set in stone yet,” the running back told ESPN.

A Harvard rushing attack without Darrington, whether it takes the field in the spring, next fall, or even later, would likely be led by young breakout star Aidan Borguet. The sophomore running back carried the ball 91 times for 645 yards and tied Darrington with seven touchdowns in his rookie campaign. The Ivy League’s 2019 Rookie of the Year punctuated his season with a dominating performance in the final game against Yale, rushing for 269 yards and four touchdowns on just 11 carries.