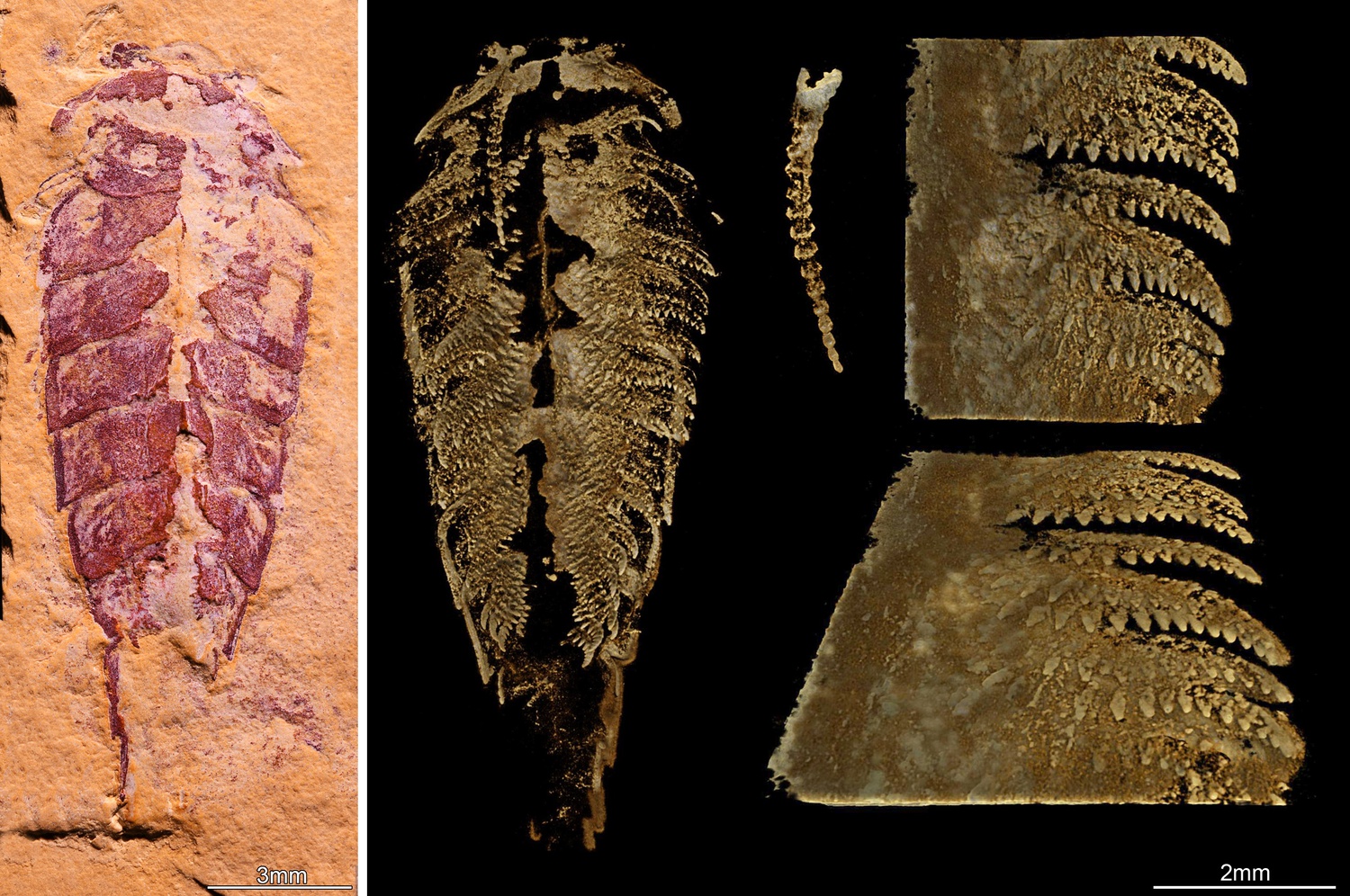 A new Harvard study shed light on the evolution of arthropods. By Courtesy of Yu Liu
By Meera S. Nair, Crimson Staff Writer

Organismic and Evolutionary Biology assistant professor Javier Ortega-Hernández, as part of a team of international paleontologists, has discovered a new shrimp-like species originating from the early Cambrian period through a technique called micro-computed tomography.

The species — whose discovery was announced in a paper published in BMC Evolutionary Biology this summer — lived approximately 518 million years ago and is the distant ancestor of some of today’s arthropods, such as spiders and crustaceans.

The species, named Xiaocaris luoi, possessed 810 dagger-like spines distributed among its 54 legs, which it used to tear apart prey it found on the ocean floor. The species, however, was quite small in length, measuring 2 centimeters. Through micro-CT imaging, the researchers were also able to determine that the shrimp-like creature had a boomerang-shaped head and a pair of antennae capable of detecting the environment.

Ortega-Hernández said that while his was not the first research team to employ micro-CT imaging, the technique’s application to studying fossils such as these was novel. Micro-CT, unlike conventional imaging methods, allows paleontologists to visualize fossils which have been tightly bound into rock.

“Many of the fossils we work with are pretty flattened, so that leaves us with only one side of the fossil to work with,” Ortega-Hernández said. “We really risk damaging these important specimens if we are not really careful, so it is not practical to attempt to dislodge them from the rock to which they are attached.”

“So by the time this process finishes, we have a 360-degree view which we can compile into an interactive depiction of the animal,” Ortega-Hernández said.

“We have an opportunity to re-study tens, almost hundreds, of species we knew of before, but with the potential of obtaining critical new information from them,” Ortega-Hernández added. “Even though it is the same material, we now have tools that allow us to get much more detail from them.”

For the past five years, Ortega-Hernández has collaborated with Yu Liu, a paleobiology professor from Yunnan University in China, to study the Cambrian fossils. Since many of the fossils originate from Yunnan Province — in an area replete with well-preserved fossils known as Chengjiang Biota — Liu’s lab in China conducts the majority of micro-CT imaging. The digital scans are then sent to Ortega-Hernández, where he remotely studies the fossils.

In describing his partnership with Liu, Ortega-Hernández said he has had “many fruitful discussions which led to insights, and ultimately this discovery” since first connecting in 2015.

Chair of the OEB Department Elena M. Kramer wrote in an email that she believes Ortega-Hernández’s approach of applying micro-CT to analyze previously unearthed fossils will “yield startling details and insight.”

Director of the Museum of Comparative Zoology James Hanken similarly wrote in an email that Ortega-Hernández’s research has “revealed a vast, underappreciated diversity of species during the Cambrian era.”

“These data are helping to resolve longstanding debates regarding the evolutionary relationships among invertebrate animals alive today and of how these groups--and their ancestors--waxed and waned over geologic time,” Hanken wrote.