In ‘Capone,’ A Defanged (And Diapered) Mob Boss Reckons With His Past 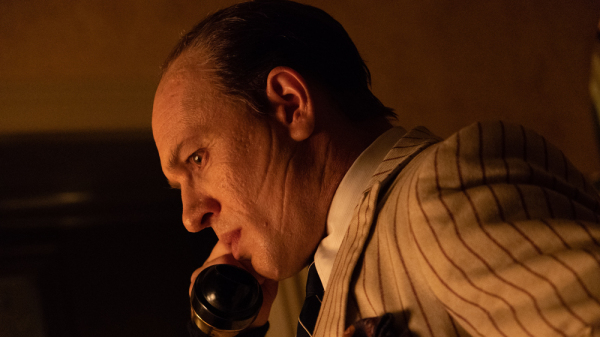 If the last 15 minutes of “The Irishman” (2019) left you hankering for another geriatric gangster flick, writer-director Josh Trank’s vision of a demented and guilt-ridden Al Capone may be just the ticket. For the rest of us, though, “Capone” is a competent but ultimately derivative character study that is easy to sit through and just as easy to forget.

Tom Hardy plays Al Capone, the titular gangster, who has been released from prison to live under government surveillance in his Florida mansion. Suffering from advanced neurosyphilis and facing financial ruin, Capone is under pressure from those in his inner circle – including his brother Ralphie (Al Sapienza) and doctor (Kyle MacLachlan) – to reveal the location of a 10 million dollar stash he buried years ago. The catch is he can’t remember the hiding place.

“Capone” is desperate for you to take it seriously, and that’s the problem. Many of Trank’s artistic decisions – from the overlong opening credits sequence to the grandiose, Puccini-heavy soundtrack – are prestige picture clichés bound to elicit a few eyerolls.

This is also true of the film’s handling of Capone’s mental illness. In the film, Capone’s paranoid delusions commingle with reality, with figures from the past appearing in the present and vice versa. Given the simplicity of the plot, this element provides much of the film’s intrigue. But there’s little here that hasn’t already been done more effectively – particularly in Ron Howard’s “A Beautiful Mind” (2001), which seems to be a major influence. Capone’s cryptic (and frequently gruesome) visions often borrow from famous horror films: A mysterious boy (Christopher Bianculli) holding a golden balloon evokes Georgie Denbrough from “It” (2017), and Capone’s memory of a glitzy Prohibition-era party recalls Jack Torrance’s vision in the ballroom of the Overlook Hotel from “The Shining” (1980). “Capone” also takes cues from Scorsese’s “Shutter Island” (2010), another movie that centers on a paranoid mental patient who is preyed upon by malicious doctors and false friends.

These elements are derivative, but they are not wholly unsuccessful. There is fun to be had piecing together the details of Capone’s past from the fractured memories we see on-screen. And though some of Trank’s directorial flourishes feel canned, “Capone” is a visual pleasure. Thanks to cinematographer Peter Deming, the deep blues and reds of Capone’s opulent estate (recreated by production designer Stephen Altman) pop beautifully in contrast with the murky grays that fill the nightmare sequences.

More importantly, the performances are first-rate: As Capone, Hardy is almost unrecognizable, his voice raised to a raspy falsetto. He somehow manages to exude both great menace and utter helplessness, a remarkable feat. The role of Capone’s long-suffering wife Mae (Linda Cardellini) is mostly thankless, but Cardellini does a wonderful job conveying her character’s muted grief. Matt Dillon also stands out in the role of Johnny, an old mob associate whose affability conceals a dark past.

There is humor, too, which works despite the film’s self-seriousness. After a stroke, Capone’s doctor insists that he stop smoking and suggests that his cigars be replaced with carrots. Ralphie objects (“What is he, fuckin’ bugs bunny? He’s gonna go on a rampage!”). But Capone doesn’t notice the switch, and he spends the rest of the film with an orange wedge dangling from his mouth.

All told, “Capone” is not nearly as bold or innovative as Trank seems to think it is, but that’s okay. The film’s strengths make for a compelling enough divertissement – certainly worth 100 minutes of your time and a few bucks on Amazon Prime Video.

—Staff Writer Branch Freeman can be reached at branch.freeman@thecrimson.com