‘Another Round’ is Intoxicatingly Good 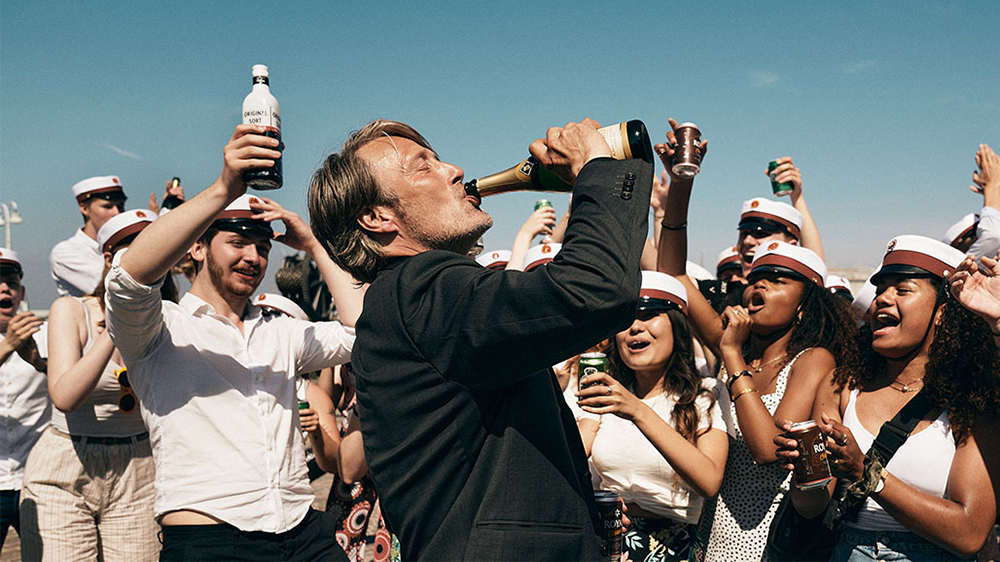 Mads Mikkelsen stars as Martin in "Another Round."
By Sam F. Dvorak, Crimson Staff Writer

In its original language, Danish director Thomas Vinterberg’s latest feature is called “Druk” — translated literally, “Binge Drinking.” The official English title is a bit more poetic: “Another Round.” As Denmark’s submission to the 2021 Academy Awards for Best International Feature, this unique “drinking drama” has quickly gathered acclaim and awards buzz. While the film risks glamorizing excessive drinking, “Another Round” is also brilliantly acted with a life-affirming message.

The story follows four middle-aged high school teachers: Martin (Mads Mikkelsen), Nikolaj (Magnus Millang), Peter (Lars Ranthe), and Tommy (Thomas Bo Larsen). Martin feels out of touch with life, struggling to connect at home and at work. At a dinner party, Nikolaj brings up an obscure theory suggesting that humans are born with a BAC that is 0.05% too low, and that constantly drinking to that level makes one “more relaxed and poised and musical and open. More courageous in general.” Martin — and his group of burnt-out friends — decide to test this philosophy.

Vinterberg could have easily taken such an over-the-top premise into the realm of slapstick comedy, but thankfully, “Another Round” is not that kind of movie. A cliché like drunkenly walking into a wall isn’t played as a joke; rather, it’s more realistically disruptive and embarrassing. The film still has its witty and clever moments, but it isn’t laugh out loud funny — and it doesn’t need to be.

Rather, the film takes its time ruminating on some compelling themes. With heartwarming moments and profoundly relatable characters, “Another Round” paints a touching picture of the importance of enjoying life and making the most of relationships. Though a superficial glance may suggest otherwise, the film isn’t a love letter to drinking culture as much as it is a love letter to life and friendship.

With that said, alcoholism is hardly worth romanticizing, and “Another Round” borders on presenting an overly positive image of excessive drinking. A particular scene in which Peter encourages a stressed out student to drink before an exam may not sit well with many audiences, who are rightly wary of promoting alcohol dependence. Denmark has a very significant drinking culture — according to recent data from the WHO, almost half of 15 year old Danish boys have been drunk at least twice, significantly more than any other country in the EU, and more than one in ten Danish males have an alcohol use disorder. For much of the film, the characters maintain a consistently high BAC and see more positive than negative effects. For some audiences, the expectation that heavy drinking will result in serious consequences may be more distracting than suspenseful, and could mar many of the film’s otherwise joyous moments.

Regardless, the heart and soul of the film lies with its four main characters. From silly games to deep conversations, audiences see their friendship from angles that everyone can relate to. The screenplay (penned by Vinterberg and his frequent collaborator Tobias Lindholm) perfectly captures the banter between the four friends. They are brought to life by stellar performers with undeniable chemistry. The relationships have a fair amount of effective physicality — there’s plenty of hugging and dancing together. Along with that, the use of close-up shots enhances the cast’s nuanced performances. Mikkelsen is utterly believable, and “Another Round” highlights his range as an actor, as Martin is a far cry from his villainous roles in “Hannibal” and “Casino Royale.”

The icing on the cake is the film’s soundtrack. The music is often diegetic — singing in a bar, rehearsing “In Denmark I Was Born” with a school choir, or appreciating the beauty of a classical piano recording. Regardless of the situation, the music in any given moment always serves the story and effectively amplifies a scene’s emotions. The final scene of the movie features the original single “What a Life” by Scarlet Pleasure. Perhaps this song’s lyrics best capture the spirit of the story: “What a life! What a night! What a beautiful, beautiful ride!”

“Another Round” is available to stream now. You can watch the trailer here.

— Staff writer Sam F. Dvorak can be reached at sam.dvorak@thecrimson.com.