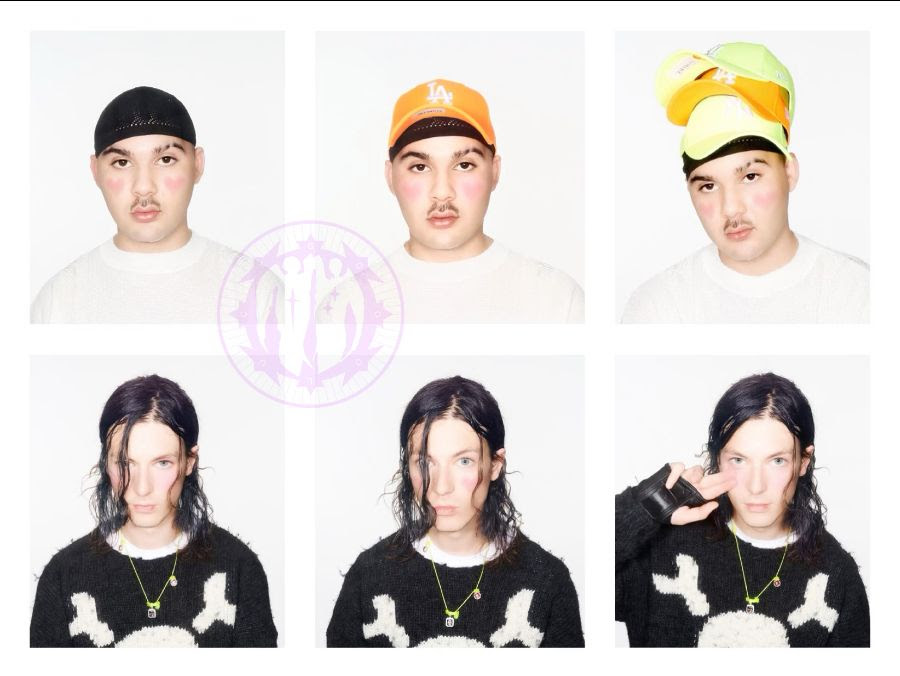 A promotional image of Bladee and Mechatok
By Sofia Andrade, Crimson Staff Writer

Artists Bladee and Mechatok, both known for their colorful and cryptic social media aesthetics, appear unnatural sitting in the beige, monochromatic room they’re calling from. The room and their outfits — black sweatshirts for both and, for Mechatok, a black New York Yankees cap — are antithetical to the image the pair have crafted for themselves through their music and online presence. The casual groutfits were a stark departure from their established aesthetic, saturated with bright colors and glowing figures to complement their hyper-produced pop songs.

Video-calling in from their label YEAR0001’s office in Stockholm, Sweden, the 26-year old Swedish rap icon — known by his fans as an “autotune angel” — and the 23-year old German producer sat down with The Harvard Crimson to talk about their latest album, “Good Luck,” and what it’s like to create collaboratively when the world is on pause.

That same contrast between the room and their outfits is evident in how they interact. Bladee, the blueprint “soft boy,” is vague and laconic in his descriptions of the music and process behind it, while Mechatok serves almost as his translator, taking Bladee’s responses and adding to them with examples and imagery. Almost two years of partnership has clearly molded a synergetic duo.

In “Good Luck,” too, contrast leads the way. Throughout the album, the duo blend expansive, ethereal tracks like “Intro” and “Grace'' with infectious dance beats like “God” and “Sun,” providing listeners with a wide array of musical soundscapes to experience. Escapist lyrics about spirituality and the ennui of the everyday clash with bright, saturated production — just as their everyday outfits clash with the extraordinary image the artists have crafted for themselves online.

Bladee, whose real name is Benjamin Reichwald, has been a growing figure in the cloud rap and pop genres, along with fellow Swedish rappers Yung Lean and Ecco2k, since he released his first album in 2016.

Mechatok, real name Timur Tokdemir, hails from Munich, Germany, where he lived before moving to Berlin and immersing himself as a producer in the city’s extensive club culture. Classically trained in the guitar until the age of 18, Tokdemir has since cut his teeth producing house, rap, and pop music.

In considering his roots in classical music and the effect they have had on his music today, he said, “There's something very pure about... transcriptions for guitar. [They] have this thing to them that like you kind of have to merge in the chords, the melody and everything into these six strings…. So there's something about this compactness and sort of like deep emotionality of that, that sort of trickled down into the productions I do.”

Many of the album’s eight songs sound radically different from one another, in part because of Reichwald and Tokdemir’s diverse musical backgrounds. It is that striking dialectic that drives the album forward. While still advancing the musical traditions that each artist is known for — Reichwald with his cryptic lyrics and signature autotune, Tokdemir with his melody-driven mixes — “Good Luck” stands out against the catalog of both artists as a sign of growth from the experience of collaboration.

“That's... part of why we worked together,... because it's like, kind of a different sound from what I would normally do,” Reichwald said before later adding, “I don't maybe think as much of the process and these aspects of what a song is.”

“That's probably one of the biggest things I've learned from this collaboration,” Tokdemir added. “Benjamin had this sort of thing, where [writing] is this sort of stream of consciousness that you then curate afterwards, which makes the results seem much more effortless and kind of as if it was spawned out of nowhere, rather than feeling like this almost forced and super worked thing that maybe lacks a bit of emotionality sometimes.”

For the pair, these differences meant that “Good Luck” required a good deal of experimentation. Though Tokdemir has worked with Drain Gang in the past, contributing to the collective’s 2019 album “Trash Island,” and with Reichwald specifically on the 2019 single “All I Want,” “Good Luck” is the first time the pair has collaborated so extensively. For the creatively diverse duo, the creation of the album was a slow and deliberate process of combining influences and practices. At its core, it involved adding and removing instruments and layers of track until the final product sounded specific enough to get the point across but stripped down enough so that it exists as an essence of the thing.

“The actual making of the song is very intuitive. We just made it in one go pretty much and then we would do this kind of exercise where we, by listening to it, try to decide, ‘What's the best form?’” Reichwald said of their creative process. “Then we'd have the original vein of something that just kind of came to us without contemplating.”

“It's a lot about reduction,” Tokdemir added. “Which is funny because... in some songs that then means the most essential version of it is something that's very dancey and has a kick drum and like, you know, you can play it in the club or whatever. For some other concepts, it resulted in it just being the most stripped down ambient thing, because that was enough for this emotion to be conveyed.”

The last song on the album, “Grace,” for example, is almost entirely constructed by sampling a single sound: the bell that comes on in airplanes when the seatbelt sign goes off. The sense of anxiety that comes from that singular sound — and from the various distortions of it that Tokdemir creates — is enough to drive home the idea presented in Reichwald’s lyrics: “Come down with grace.”

Still, the pairing — while finding strength in its contrast — was not wholly unexpected. The two artists operate mainly in overlapping circles, and recently, Reichwald had spent much of this past year living in Berlin, leading to the perfect opportunity for in-person collaboration, even amid a growing pandemic.

Beyond circumstance, the two artists also share a similar ear for music and taste for strong hooks and melodies that primed them for a fruitful collaboration.

“We definitely feel like we would have made this project or something that sounded like this at one point, anyway, because we both have been really into exploring these kinds of songs,” Reichwald said.

“I guess when I was playing one of my lead melodies or whatever,... I realized that they're like, essentially using the same notes that [Reichwald’s] vocal melodies use. It's like pentatonic scales and these sort of quiet, ethereal seeming, super catchy, very reduced melodies that you can kind of loop into infinity,” Tokdemir added, citing that it was then that it struck him that whatever he did with Reichwald would work really well.

From first listen, the album presents itself as a worthy addition to any club scene — a sense only aided by the fantastical, escapist lyrics of glittering tracks like “Rainbow” (“Take the rainbow road / Put the world on hold / For a moment”).

“When we had just started making these songs, we were just pretty excited about performing it,” Reichwald said. “This record is more visceral,” Tokdemir agreed, adding that it was the type of music people want to dance to.

Due to the restrictions on gatherings brought on by the pandemic, however, the possibility to premiere the new tracks as they beg to be premiered — to a swarm of dancing people in a dark, crowded room — was lost to Reichwald and Tokdemir.

Therein lies the final contrast that defines “Good Luck” — at least for the current moment.

“We [still] wanted to do something that's actually like a real event so that it feels like this happened,” said Reichwald. “Because otherwise, we would just release the album [and] it would be some numbers online.”

The show featured the pair in their (digital) element, as Tokdemir guided the audience through seamless transitions in his DJing and Reichwald slouched around the stage in a long fur coat and dark sunglasses.

“Bladee looks like he walked out of the matrix,” one fan wrote in the live event’s chat.

While the show proved a memorable way to cement the album’s arrival provided the circumstance, the virtual experience of watching the pair light up a screen was a far cry from the visceral reality of a concert or club space. Towards the beginning of the performance, the act of experiencing the club-ready music paired with the two-dimensional, digital space felt like watching a fish out of water. The show’s colorful and dynamic visuals, impressively projected across the entire room the duo performed in, fell flat when viewed through a laptop screen.

Reichwald and Tokdemir performed as they would for any show, with Tokdemir anchored to a neon-accented soundboard and Reichwald promenading unbothered across the stage as he sang, but it was obvious that the infectious energy that comes from an in-person audience was lacking.

As the show progressed, however, the effortlessly danceable tracks like “God” and “Into One” took over. Even sitting on a desk chair watching the show, it was impossible not to want to move to their saccharine beats.

The chat function of the livestream, too, became perpetually flooded with fans’ comments, creating a virtual surrogate for the community-driven concert experience. By the time the duo had reached their last song, “Grace,” the energy in the chat was palpable — creating the exact environment and point of catharsis for the album that Reichwald and Tokdemir had envisioned. Even after the screen went black and the two walked off the virtual stage, the chat remained active for the next 10 minutes, flooded with messages from Drainers and cementing “Good Luck”’s standing as an album that was able to transcend the immediate circumstance of the pandemic, just as Reichwald and Tokdemir were able to when writing it.

In terms of what’s next for the artists, the most they could say was that there’s a lot to come. “It’s hard to specify but definitely a lot of stuff,” Tokdemir said.

“[We] can’t stop working,” Reichwald added. “I think next year will be fun and great for music for both of us.”