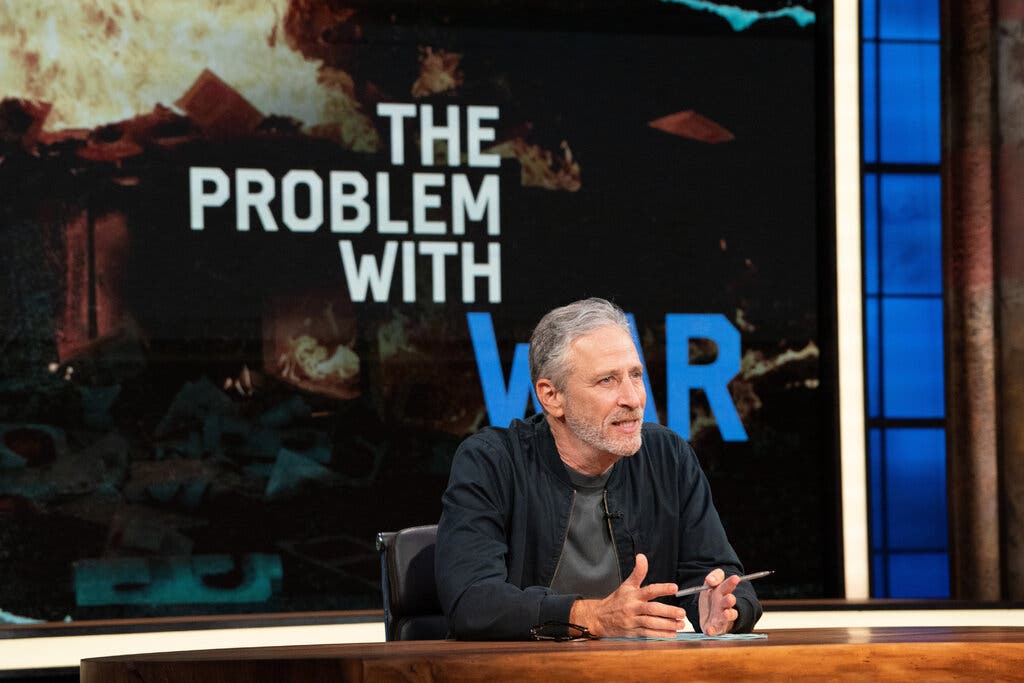 Jon Stewart in "The Problem with Jon Stewart." By Courtesy of: Apple TV+
By Mira S. Alpers, Crimson Staff Writer

The world looks very different now than it did in August of 2015, the last time a TV audience saw Jon Stewart behind a desk as the host of acclaimed news-comedy hybrid show “The Daily Show.” Watching his newest project “The Problem With Jon Stewart,” produced in association with Apple TV+, it is hard not to feel as though Stewart can’t quite keep up with the times.

“The Daily Show,” which has been hosted by South African comedian Trevor Noah since Stewart’s departure, has always had a strong social justice angle. Unlike other comedic news programs such as SNL’s “Weekend Update,” “The Daily Show” did not position itself as simply a satire of the news but rather as a show that, through satirically examining corruption and political malfeasance, attempted to speak truth to power.

When Donald Trump came on the scene around the time Stewart left television, “The Daily Show,” “Last Week Tonight,” and other clip shows reacted to him just as they had reacted to other conservative politicians: by laughing at him. But, as Dan Brooks writes in his New York Times Piece “How President Trump Ruined Late Night,” Trump himself so capitalized on his own inherent ridiculousness that this approach became untenable, with Trump himself saying things so incredibly incendiary that it was impossible to tell if he was joking or not. According to Brooks, irony has become a tool of the right, “a means to advance joke versions of its actual agenda, in ways that make it hard to distinguish between the two.” It became impossible for comedians to satirize Trump in a vacuum, as his satirical quality was part of his power.

Now, under Biden, it's unclear if comedy can once again be used as a tool of political accountability. This is the central question plaguing “The Problem with Jon Stewart,” and, at least in the first episode, Stewart and his team never quite settle on an answer.

The first episode, titled “War,” deals with a rather abstruse issue — burn pits. Utilized by the U.S. army in War Zones, burn pits are large piles of medical waste, human excrement, and other trash that are burned as a method of disposal. After spending a large amount of time in contact with the highly carcinogenic products of these fires, veterans often develop cancer and other life-threatening disabilities.

The most compelling part of the show is Stewart’s interview with a panel of veterans and their spouses who describe the difficulty of finding medical help for these ailments, as the Department of Veterans Affairs does not cover burn pit-related conditions. Stewart handles these conversations with incredible empathy, but his care is undermined when the interview cuts to a comedy skit about how to make a burn pit at home. Like most of the jokes in the show, instead of seeming funny, the bit comes off as insensitive and awkward.

There does not seem to be a clear villain in the burn pit story, even after Stewart interviews the Secretary of Veteran Affairs, Denis Richard McDonough. McDonough seems like the obvious candidate for this role as he, more than anyone else, has the ability to help the victims of burn pits. When Stewart pushes him and questions him on why the VA refuses to change its coverage policy, McDonough is unable to give a clear answer. However, this lack of clarity does not come off as malicious. The conclusion, instead, seems to be that bureaucracy, not McDonough individually, is holding back necessary change.

Under Trump, the political enemy could not be taken down by comedy. Under Biden, the political enemy is embodied less by individuals and more by a system, which is hard to imagine comedy effectively changing. As a result, the jokes in Stewart’s show have none of the same cutting-edge resonance that they did in Stewart’s “Daily Show” era. Instead, they come off as cries of desperation. Maybe, then, the problem with “The Problem with Jon Stewart” is not Jon Stewart — maybe it's that in the current political moment, the comedy-news hybrid show, or at least Stewart’s familiar version of it, no longer works.