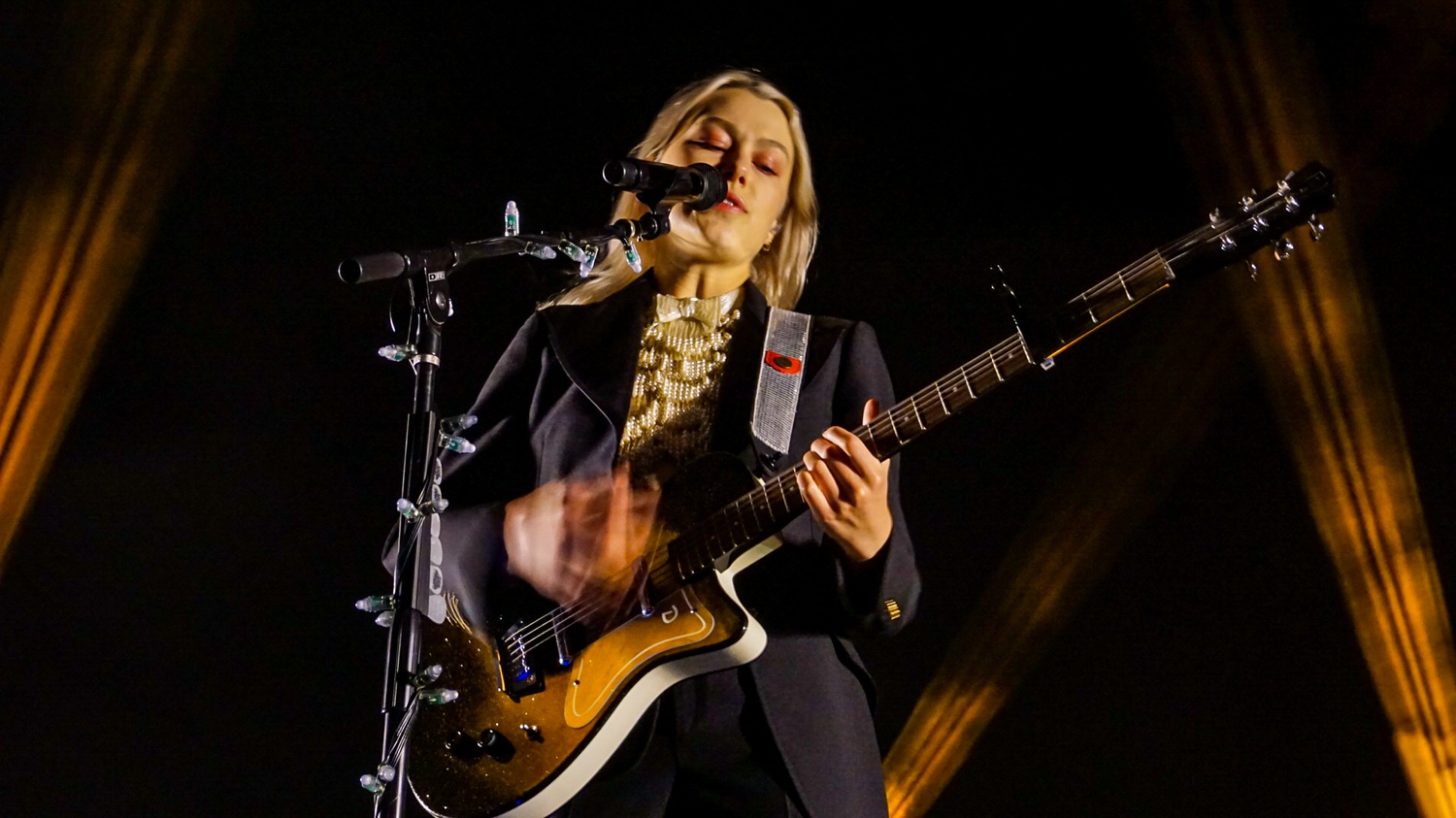 Phoebe Bridgers at her Sept. 27 show at the Leader Bank Pavilion in Boston. By Courtesy of Sofia Andrade
By Sofia Andrade, Crimson Staff Writer

The MBTA was overrun by Gen Z-ers in Doc Martens, ripped tights, and TikTok-esque money piece highlights last weekend as thousands made their way to Boston’s Leader Bank Pavilion for two nights of sold-out Phoebe Bridgers shows on Sept. 26 and 27.

The indie icon’s nationwide tour has come more than a year after the release of her pandemic-made sophomore album “Punisher” and features dark electro-pop trio MUNA as the opening act. (The band is signed to Bridgers’ Saddest Factory Records.)

Bridgers is known for her intoxicating juxtaposition of wrenching lyrics (songs like “Graceland Too” and “Savior Complex” stand out as obvious examples) and air of welcome irreverence in her delivery. The Sept. 27 Boston show was a testament to that duality, with Bridgers expertly toeing the line between heartbreaking and energizing. Decked out in a fittingly skeleton-inspired beaded crop top, slacks, and a black blazer, she exemplified that contrast from the very beginning. When she walked out to the Black Eyed Peas’ 2009 banger “I Gotta Feeling” (she said she once unironically put it on a playlist for her crush), she mediated it by immediately breaking out into “Motion Sickness,” a gutting rebuke of a past abusive lover couched in a sparkling, upbeat melody.

Though Bridgers isn’t alone in juxtaposing sad lyrics with a glittery exterior — artists like Maggie Rogers and Brockhampton come to mind as others — she weaponizes that juxtaposition with unprecedented precision to create a perfectly calibrated emotional experience. For the deceptively cheery songs like “Kyoto,” Bridgers whipped out a black BC Rich Warlock electric guitar for added metal flair. Her band, too, wore skeleton onesies, a stark contrast with the storybook-inspired visuals that played behind them. At other moments, the stage resembled a starry night sky, mimicking the glitter that coated Bridgers’ other guitar, a black acoustic one. Trumpeter JJ Kirkpatrick was a standout on stage, adding stunning embellishments to Bridgers’ songs in an arrangement reminiscent of her November “Copycat Killer” EP.

After so much time spent away from the stage, the performance had an added energy, refreshing and urgent as Bridgers reminisced about shows past. “This is insane,” Bridgers said of playing at the pavilion. “We played a venue here on my first record tour where the backstage was the bathroom, so this is insane.” At another point, she shared about a past Boston concert she had had with her band boygenius, where a random man started berating her and bandmate Julien Baker. “Anyway, it was really mean and it’s so cool to come back and have the opposite fucking experience,” she said.

Despite the relatively slow pace of the show — she is, in fact, a singer-songwriter — the audience was captivated throughout, as evidenced by the feverish screams that punctuated each song. When she sang “you couldn’t have stuck your tongue down the throat of somebody who loves you more,” a particularly gripping lyric from “Moon Song,” the venue shook as the audience sang along. “It’s really cool to get that kind of reaction out of, like, some folk music,” she said at one point.

Songs like “Scott Street” and “Georgia” were highlights. “I’m a little embarrassed of the melodrama” she said of “Scott Street”’s soaring climax before starting an especially powerful performance of it. But it was “I Know the End,” her closing song, that really brought the house down. Facilitated by the song’s irresistible build towards an epic climax, Bridgers was at her most powerful, captivating the audience in soaring guitar solos and vocals as a house burned down on the stage behind her.

Bridgers’ encore was a cover of Bo Burnham’s “That Funny Feeling” from his experimental comedy project “Inside,” a track she’s played at every stop on her tour so far and which she recently released on Bandcamp to raise money for Texas abortion funds. Paired with the television static on the screen behind her, the encore felt especially apocalyptic. With cutting lyrics about the generally depressing and near-apocalyptic state of the world — “A gift shop at the gun range, a mass shooting at the mall,” she sang at one point — the song made for a delightfully tense and eerie end to the night, fitting for Bridgers’ own brand of aestheticized nihilism.
—Staff writer Sofia Andrade can be reached at sofia.andrade@thecrimson.com. Follow her on Twitter at @bySofiaAndrade.