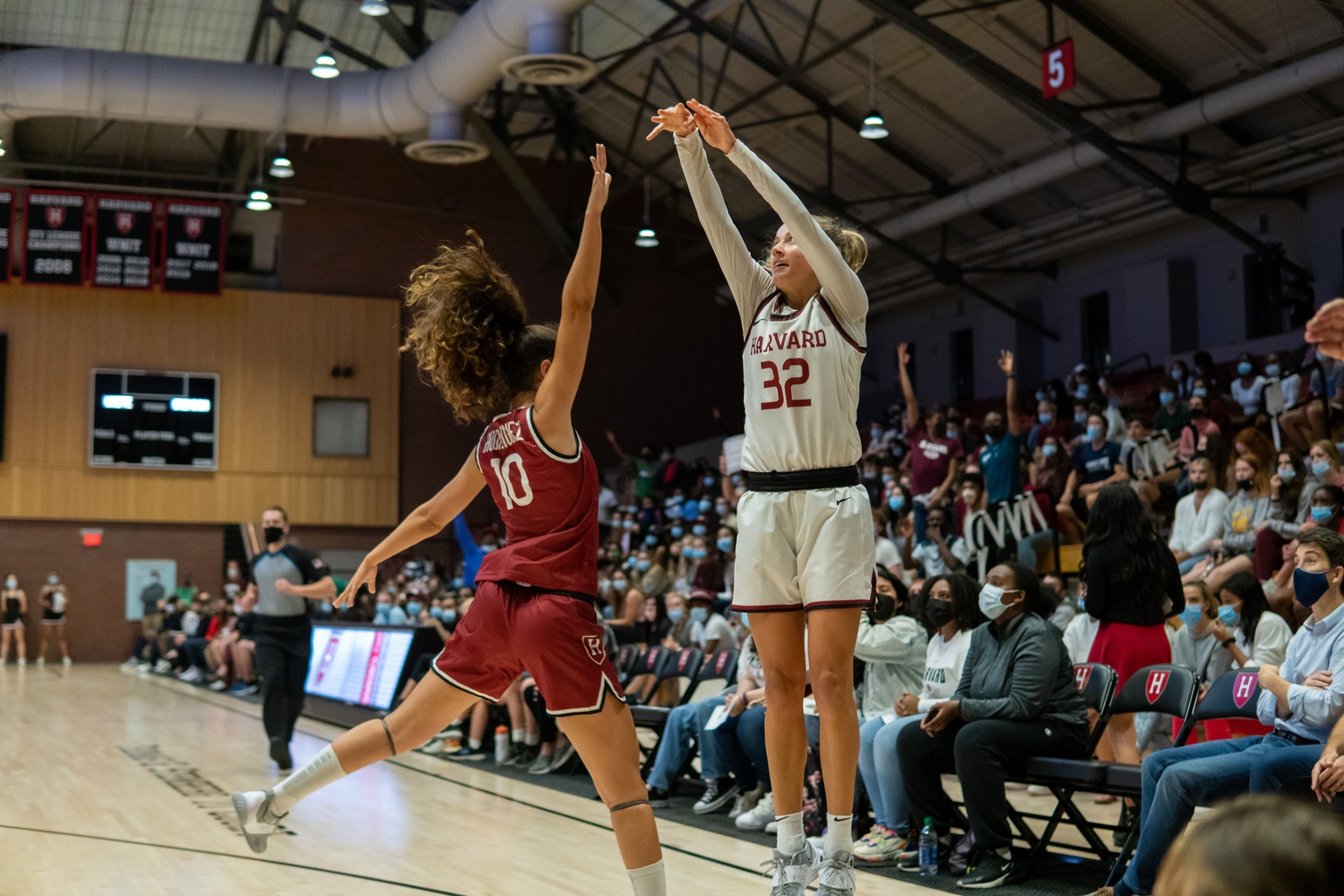 First-year guards Elena Rodriguez and Elle Stauffer (pictured above at the Crimson Madness scrimmage) will look contribute on a team full of newcomers. Harvard first-years and sophomores got their first taste of college basketball on Tuesday against Boston College. By Zadoc I. N. Gee
By A.J. Dilts, Crimson Staff Writer

Harvard women’s basketball returned to the hardwood Tuesday night for the first time in 612 days, and Coach Kathy Delaney-Smith did so for the final season-opener in her illustrious 40-year career. The announcement of Coach Delaney-Smith’s retirement at the end of this 2021-2022 campaign provides an opportunity for the Crimson’s newest influx of talent to write a successful final chapter in her storied run. Although Tuesday night’s 86-60 loss to Boston College did not begin this historic season the way Harvard had hoped it would, optimism remains strong in the program for the season ahead.

The Crimson (0-1) began its road matchup trading baskets with the Eagles (1-0). Harvard’s starting lineup featured four guards with first-year Harmoni Turner, senior captain Tess Sussman, junior Maggie McCarthy, and sophomore Lola Mullaney, with senior Maddie Stuhlreyer anchoring the paint from the forward position. Early triples from Mullaney and junior guard Annie Stritzel, one of Coach Delaney-Smith’s first substitutes off the bench, kept the Harvard deficit to only three points as Boston College jumped out to a 10-7 lead. A Stritzel driving layup through an Eagle defender gave the Crimson a 14-13 advantage before both teams produced stop after stop on the defensive end of the court.

Breaking the scoring drought was Boston College’s senior forward Taylor Soule, whose back-to-back baskets included her 1,000th point in an Eagle uniform. Soule would finish the night with 19 points on 80 percent shooting from the field, and her veteran leadership of an experienced squad was a steadying force for Boston College through the rest of the game. After the contest, Delaney-Smith pointed to the wide gap in collegiate experience between her team of nine newcomers and a Boston College team that returned 99 percent of its scoring from 2020-2021.

“[My team] played young, which is not surprising,” Delaney-Smith said. “I think BC were all seniors and veterans who played last year and played together all summer. I mean, we're just behind because we did not play last season. At times I had three first-years all on the floor. So it's just your classic veterans versus young kids, and I think, as I said, we did some good things. But our inside presence wasn't strong enough to handle their inside presence. [So] not physical enough and not experienced enough.”

Of the Crimson’s new additions to the roster, which includes the sophomores who were unable to compete last year due to the Ivy League’s cancellation of the 2020-2021 season, Turner provided a glimpse of how key she will be for Coach Delaney-Smith’s final team. Although the former five-star recruit struggled from the field, she displayed an ability to blow by her defender and connected on a pair of smooth pull-up jumpers in the mid-range. She finished with 13 points, second on the team to Mullaney’s 16.

After a competitive first quarter in which the Crimson trailed 19-15, the Eagles’ depth and ability to run in transition opened the game wide open in the second quarter. Tess Sussman and Mullaney provided an offensive spark with two triples to hold the BC lead to four, but fast-break scores and key contributions from players off the bench allowed the Eagles to end the quarter with a 44-29 lead. BC outperformed the Crimson in fast break points 21 to five and bench points 32 to 15. Harvard was unable to match the Eagles’ strong play on the inside through the third and fourth quarters, and BC remained in control to the final buzzer, winning the contest by 26 points.

When asked after the game about any shift in her perspective given it was her final regular-season opener, Coach Delaney-Smith focused instead on the set of takeaways from Tuesday night that have her optimistic for the year ahead.

“You know what, that decision has been made and it's behind me,” Delaney-Smith said. “I really love this group of student-athletes. I think there's enormous potential. Again, we're going to have growing pains, but this game did not discourage me. We could have played much better, but I saw a lot of light. And I saw how deep we can be and how good we can be. I saw that we just have to get through the growing pains of youth.”

Hope for the Crimson’s 2021-2022 campaign can be further found in the return of junior guard McKenzie Forbes from a minor injury. Before joining the Harvard squad in 2020, the 2018 McDonald’s All-American averaged 5.3 points per game and connected on 34 three-pointers in her freshman season at California, Berkeley.

“She's a veteran and she's got good size and good power,” Delaney-Smith said. “So I mean, she was a very valuable missing piece to what we can do. [...] Her IQ is phenomenal. Her skill set is phenomenal. You know, she's already a very valuable part of our program, so we can't wait to get her out on the floor.”

Although Tuesday’s performance was not the strongest start to year number 40 for Delaney-Smith, the importance of this season is certainly not lost on the Crimson players. When Harvard travels to Amherst to take on UMass this Friday at 5:00 p.m., look for Forbes, captain Tess Sussman, and company to give full effort for Coach Delaney-Smith’s last regular season bout against the in-state rival.

“Once you take a step into the gym that Kathy Delaney-Smith is in, you're there for life,” said Sussman at the 2021 Ivy League media day. “I think what sets her apart are the priorities and the values that she instills in you, and those last a lifetime […] We have a million different personalities all throughout our community, but we all connect because we have that connection — which is Kathy.”