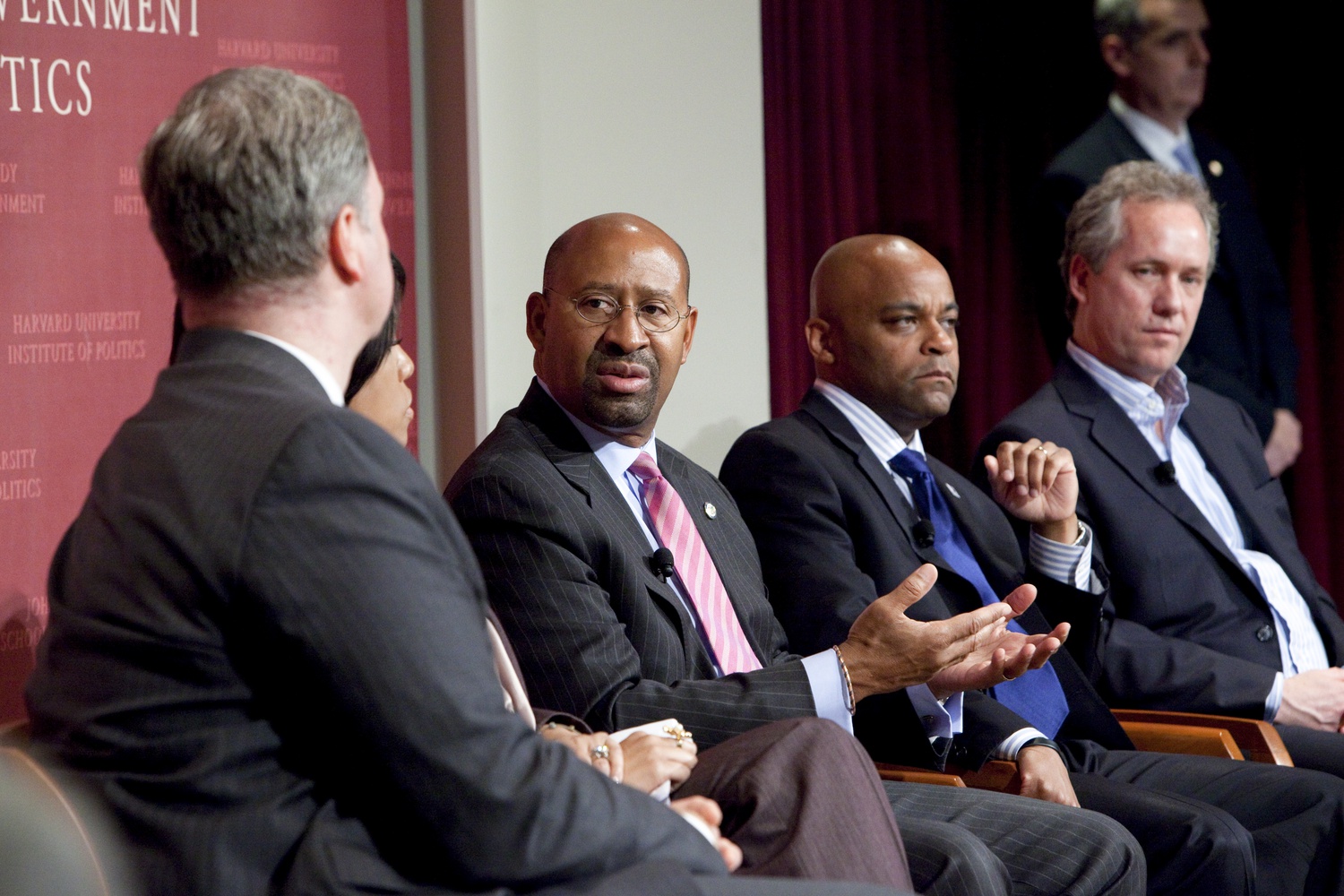 Former Philadelphia Mayor Michael Nutter, third from right, spoke at the IOP for a mayors' forum in 2011. The IOP announced that Nutter will be become the chair of the IOP Senior Advisory Committee this past week. By Courtesy of the Harvard Institute of Politics
By Jasper G. Goodman, Crimson Staff Writer

Former Philadelphia Mayor Michael A. Nutter was tapped to serve as chair of the Harvard Institute of Politics’s Senior Advisory Committee Wednesday, filling a role that was left vacant for nearly two years.

Nutter, who was elected twice as mayor of Philadelphia, will become chair of the 17-member committee after serving as a general member of the group for just eight months. His appointment comes after several high-profile members of the body have resigned over the last two years.

The IOP Senior Advisory Committee has helped oversee and direct the Institute since it was founded in 1966 as a memorial to former President John F. Kennedy ’40. The committee’s role in overseeing the Institute has increasingly become a source of controversy since the 2009 death of former U.S. Senator Edward M. “Ted” Kennedy ’54-’56, who helped steer the organization for decades as the main Kennedy family representative on the committee.

Caroline B. Kennedy ’80 — JFK’s last living child, who took over as the family’s main representative on the committee after Ted Kennedy died — resigned from her post in February 2020 amid concerns over the governance, performance, and leadership of the IOP.

In a letter to University President Lawrence S. Bacow after her resignation, Caroline Kennedy wrote that changes to the committee’s role in overseeing the Institute proposed by Kennedy School Dean Douglas W. Elmendorf “did not reflect the mission or history of the IOP as a non-academic center founded as a memorial to my father, in which three generations of our family has invested time, effort and devotion.”

Nutter will replace former White House Chief of Staff Kenneth M. Duberstein, who resigned from the committee around the same time as Kennedy more than 20 months ago after serving as chair for the previous seven years.

“The IOP is one of the world’s premiere arenas for political debate and policy making, and I’m thrilled to provide guidance and leadership of the Advisory Committee as the IOP meets the evolving challenges of our 21st century democracy,” Nutter said in a press release Wednesday.

Elmendorf, who has played a more active role in overseeing operations at the IOP than some of his predecessors, said in a press release Wednesday that Harvard “will benefit greatly from Mayor Michael Nutter’s leadership on the Senior Advisory Committee.”

​​“His valuable experience in governance and elected office will help the IOP continue to expand and innovate in its mission to inspire students to lives of public service,” Elmendorf said.